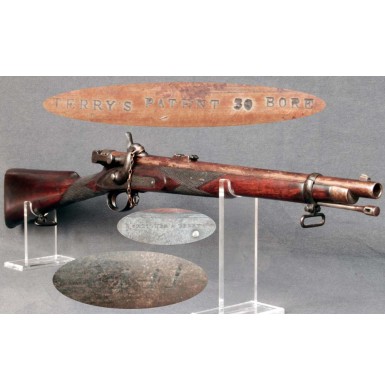 The Terry’s Patent Carbine, as produced by the Birmingham firm of Calisher & Terry was one of the more unique and innovative breechloading percussion arms to be developed in the mid-19th Century. The guns have always had a strong Civil War association with the Confederacy, primarily because of two very famous carbines that are in the collection of the Museum of the Confederacy. One of the guns belonged to famed Confederate cavalry general J.E.B. Stuart, and the other to Confederate President Jefferson Davis. Stuart’s gun was a 30-Bore Type II carbine, with the retailer name THOMAS BLISSET “ LIVERPOOL engraved on the top of the barrel. While documentable deliveries of additional Terry carbine has not yet been located, strong circumstantial evidence exists that at least some additional carbines saw use in the South, and as many as 200 may have been purchased by the US Government. In 1861, Henry Calisher traveled to New York with “200 Long Enfields”, which he offered for sale. It is not clear whether the guns were in fact Enfields, and in all probability they were Terry Patent carbines. Additionally, sources are split as to whether the guns were sold directly to the US government or the firm of Schuyler, Hartley & Graham of New York. As it is well known that a number of high profile arms were delivered to the Confederacy through purchases at the Schuyler, Hartley & Graham storefront in New York, it is quite possible that these carbines went south as well, via a “straw man” purchase by Southern sympathizers. Terry carbines may well have travelled to the Confederacy as speculative cargo in the holds of Blockade Runners as well. Speculative cargo were those items purchased by the owners and/or investors in the Blockade Runner, who were allowed to import items to the South for their own monetary gain. Recent discoveries in US Maritime Court Records have revealed that many items never thought to be purchased by the Confederacy were in fact purchased as speculative cargo for resale upon their arrival in the South. Among these speculative weapons imports were Austrian M-1851 cavalry carbines and M-1842 muskets. Terry’s Patent Carbines have long been considered a rarely encountered arm, imported in very limited quantities by the Confederacy, and have been identified as such since the days of Claude Fuller & Richard Steuart’s Firearms of the Confederacy (pages 231-232 & Plate XXVI, Figure 3) and William Albaugh & Edward Simmons’ Confederate Arms (Plate 99, Figure 3).

William Terry’s patent for a bolt-action, “Terry’s Patent Carbine” was issued on April 7, 1856. The design, as slightly modified Henry Calisher, was submitted to the British Board of Ordnance breechloading carbine trials in 1857, and in December of 1858 the Terry Carbine was approved for limited issue, with all of the firearms ordered being issued to the 18th Hussars. These first contract Terry carbines were “Type I” carbines, which were 26-Bore (.568 caliber) and rifled with 3 grooves. The carbines were also equipped with a sling bar and ring on the side of the gunstock, opposite the lock. The guns were marked with the usual British War Department ordnance ownership marks, including a Crown / VR to the rear of the lock and British military proofs on the breech. The total number ordered for the 18th Hussars is not known, but the regiment numbered some 700 men at the time of issue, so it is estimated that this initial order was for between 700-1000 carbines. These carbines remained in use with the 18th Hussars through 1864, when the guns were refurbished at British repair & refitting arsenal at Pimlico, and were subsequently issued to the South African Cape Mounted Rifles, who used the guns through about 1870. A new pattern of Terry carbine was approved in November of 1860, and these Type II carbines were typified by a new 30-Bore (.539) caliber with 5-groove rifling with a rate of twist of 1:36”. The rear most barrel band was eliminated, and was replaced with a flat key to secure the barrel to the stock, along with an action screw in the bottom of the gun and a single upper barrel band. A new rear sight was also adopted, replacing the previously use multi-leaf rear sight with a new long base “Enfield” style sight similar to that adopted for the Pattern 1861 Artillery carbine. The new pattern guns were also somewhat slighter in overall construction with lighter, thinner stocks and an overall length that was 1” shorter. These guns were produced between 1860 and 1861 for the British government, with the majority of the arms going to New Zealand for the use of their militia, as well as Australian provincial police departments, including New South Wales and Queensland. In 1861 a final pattern of the Terry carbine was adopted, the Type III. The only difference between the Type II and Type III carbines was the change to a non-snagging Baddeley patent barrel band on the new Type III carbines, and the removal of the upper sling swivel. While Calisher & Terry were producing the carbines for their British military and provincial government contracts, they were also producing commercial rifles and carbines, in both “military” and sporting configurations. Total production of Calisher & Terry carbines is not known, but based upon known inventories and their relatively limited survival somewhere between 5,000 and an absolute maximum of about 10,000 total carbines and rifles were produced. The guns may not have been serial numbered in consecutive order, and some gaps may exist. Calisher & Terry took advantage of the Birmingham gun trade to produce enough guns to fill their military contracts, and these guns are marked with the typical TOWER mark on the lock, with the date of manufacture. The custom of assigning serial number ranges was well established by other English gunmakers that licensed their patents. The best-known example being Robert Adams, who issued specific serial number ranges to makers like William Tranter, Joseph Brazier, the London Armory Company and others. This results in odd gaps in the serial number sequence and makes the dating of Adams revolvers solely by serial number problematic, as number 10,000 and 20,000 might was have been produced concurrently, but by different makers. It appears that none of the longer barreled rifles were never ordered by any government entity, but some surely was use in the hands of private citizens and militia members, primarily New Zealand. All of the New Zealand militia used arms (whether provided by the British Government or via private purchases of commercial arms) are marked with on their buttplates with an NZ and an inventory number. The Australian provincial police used Terry’s are also marked on their buttplates with similar ownership markings. This means that only those carbines, which bear no British military marks or other territorial or provincial marks, can be considered as potential Civil War imported carbines. These guns would have been commercially proved guns, manufactured for the export and commercial retail markets, and would not have had the sling bar and ring, as these were only included on British Government purchased carbines.

Overall this is a really attractive and very crisp example of a very scarce British Calisher & Terry carbine. These guns are rarely encountered on the market for sale, and when they are they are invariably British military guns or guns that bear marks indicating that they saw service in New Zealand or Australian. Commercial guns without any of these markings, and that could potentially have been imported during the American Civil War are a true rarity. This gun is in fine condition and has a gorgeous, untouched look with tons of eye appeal. The gun was certainly used and saw some light service, but was never abused or poorly treated. The gun is mechanically excellent and has a wonderful bore, which would probably shoot very accurately. The Southern association cannot be denied, since two of the best-known heroes of the Confederacy both owned one “ General J.E.B. Stuart and President Jefferson Davis. This a very scarce gun that is missing from even the most advanced Civil War era percussion carbine collections, and is rarely available for sale. I am positive that you will be very pleased with this gun, likely as pleased as J.E.B. Stuart was with his!