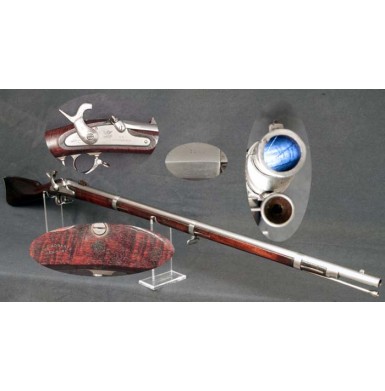 The contract US M-1861 Rifle Muskets delivered by the New York firm of Sarson & Roberts are among the rarest of US contract rifle muskets. The company was a partnership between John B. Sarson and William S. Roberts. Out of an original contract of 25,000 rifle muskets the firm delivered only 5,643 guns. This represents only .003% of the more than 1.5 million .58 US M-1861/63/64 produced during the American Civil War. On August 3, 1861 Sarson & Roberts received a contract to deliver 25,000 US M-1861 rifle muskets at the rate of $18.50 per stand. Nearly a year later, on June 17, 1862, the contract was reduced to 20,000 stands of arms by the Holt-Owen Commission, which had been appointed in the spring of 1862 to review, audit and modify as they saw fit all Ordnance Department contracts which had previously been entered into. The commission also adjusted the contract price to $20.00 per stand for 1st quality arms, with reductions to be applied to any arm that did not pass inspection and gauging as a first quality weapons. At that time, Sarson & Roberts were yet to deliver any of the guns that had previously been contracted for. Testimony before the Holt-Owen Commission, as well as correspondence from the company itself to the Ordnance Department, paints a confusing and contradictory story about the manufacture of the arms. According to research presented by James Whisker, Daniel Hartzler & Larry Yantz, in their book The US Model 1861 Springfield Rifle Musket “ 2nd Edition, Sarson & Roberts reported that as of February 8, 1862, they had purchased stock making machinery and stock blanks and were successfully producing stocks. The same report claimed that they installed lock making machinery, machinery to make rough barrels and that their initial barrels had been produced, were already proved and were in the process being of being finished. They also claimed to have procured a suitable supply of iron to produce barrels. Strangely the same correspondence indicated that the partners were having a difficult time procuring the necessary raw materials to manufacture the guns, and that they had seriously underestimated the costs involved in the endeavor. On April 7, 1862 the partners testified directly before the Holt-Owen commission and noted that their stock-making machine had been built by a Mr. Pusey, and had been in operation at their factory for two months. During that time 200 stocks had been finished. If the partners could only produce 100 stocks a month, it was clearly unlikely they would successfully fulfill the terms of their contract and come anywhere near their contracted delivery schedule. Their original contract called for the delivery of 500 stands of arms in July, August and September of 1862, 1,000 in October and November of the same year, and 1,500 per month thereafter until the completion of the contract. Interestingly, in the same testimony they mentioned that Pusey had a stocking shop, which may have alluded to obtaining finished stocks directly from Pusey. They further testified that they had entered into an arrangement with Alfred Jenks & Sons to produce all of the necessary components to produce the rifle muskets, with the exception of the stock, barrel and sight. This is again an odd contradiction to their statement in February regarding the installation of lock making machinery. Even more contradictory testimony was provided by Jenks, who reported to the commission on March 28 of 1862 that “We are making all of the gun, except the barrel, for Sarson & Roberts for 25,000 (stands of arms)”. Problems with production continued to plague Sarson & Roberts, and at the end of March of 1862, they requested assitance from the Ordnance Department to help with the proving of the barrels that they had on hand. For whatever reason, they received no response or assistance until the end of April 1862. Sarson & Roberts continued to have problems producing or obtaining barrels that were of sufficient quality to pass inspection and proving. The company apparently became desperate to acquire parts and approached Springfield Arsenal to obtain barrels, locks, and any other parts that they could purchase to assemble complete arms. This fact is born out by the fact that the 1867 Ordnance Report (the famous “Document 99”) notes that $8,434.12 was deducted from the final payments to Sarson & Roberts for the parts that had been furnished to them by the US government. Sarson & Roberts began delivering completed arms on November 22, 1862, supplying 143 1st class guns @ $20.00 each, 286 2nd class guns @ 19.90 each, 36 3rd class guns @ 18.00 each and 18 4th class guns @ $16.00 each. Deliveries continued though November of 1863, with a total of 5,643 guns being accepted. Of those only 3,761 were classified as “1st Class’ arms. The remaining guns delivered were classified as 2nd, 3rd and 4th class, much like the initial delivery was. Sarson & Roberts delivered a total of 983 arms in 1862, and the rest were delivered in 1863. The scarcest examples of the rare Sarson & Roberts contract guns are those that were assembled with a mixture of parts from Springfield Armory, as well as other sources. Those that were assembled with Springfield marked locks are marked on the flat, opposite the lock with a Sarson & Roberts makers cartouche. To date, only handful of these examples are known to exist.

The Sarson & Roberts US M-1861 Rifle Musket offered here is in about FINE condition, with the exception of a repair to the stock which will be discussed later. The gun is one of the truly scarce examples that were produced with some parts that were provided to Sarson & Roberts by the US government. At the very least the lock and stock were produced at the Springfield Armory. The gun is clearly marked with the typical Springfield Arsenal lock markings. The date 1862 is clearly stamped horizontally to the rear of the hammer. Forward of the hammer is the typical Springfield “Spread-Winged” Eagle, and U.S. / SPRINGFIELD. The top of the breech is lightly marked 1863, and the usual V / P / (Eagle Head) proof marks are visible on the left angled breech flat. The Eagle Head, when compared to known examples of the Eagle Head’s found on contractor and arsenal produced US M-1861 rifle muskets, appears to be the one attributed to Sarson & Roberts. The buttplate tang is marked with the usual US and the barrel bands all have the usual U on the upper leading edge to indicate “up”. Like most US M-1861 contract rifle muskets, the parts are marked with a variety of inspection and assembly marks. The inside of the lock is marked with the letters H over a P on the mainspring boss, and with various assembly numbers on the small lock parts. The bottom of the barrel is marked with a B and a P. The left side of the rear sight base is marked with a W. The rear of the triggerguard plate is marked with an R and the front of the nose cap is marked with a B. The most interesting marks are on the stock flat, opposite the lock. The flat is clearly marked in a two line, arched cartouche: WM S ROBERTS / NEW YORK. The stock is also marked with a set of inspection cartouches, which have been over-stamped twice, for a total of 3 strikes for each cartouche, resulting in a sort of pinwheel appearance to the cartouches. Since US arsenal produced muskets were not cartouched until the gun was completed and fully inspected, the presence of the initial cartouches on the stock indicates that the gun was initially approved. However the over strikes indicate that the gun was subsequently rejected, although no “C” condemnation marks are present. Based upon the markings on the gun, it is apparent that at least the stock and the lock were provided to Sarson & Roberts by the Springfield Armory and were among the $8,434.12 worth of parts that the company was charged for by the US government. The metal of the musket is in about FINE to VERY FINE condition. The gun is crisply marked throughout, with the exception of the light barrel date. The barrel has been lightly cleaned and has a very nice, “arsenal bright” appearance. The lock is crisply and deeply marked and functions perfectly. The gun is mechanically excellent. The gun retains both of the original sling swivels, as well as the original long-range sight, complete with all of the leaves. The gun retains its original ramrod, a swelled shank, tulip head rammer that is full length and retains excellent threads on the end. The bore of the musket is in FINE condition. It is mostly bright, with very deep, crisp rifling. The bore shows light peppering and frosting along its entire length, and might benefit from a good scrubbing. The original front sight / bayonet lug is present on the top of the barrel, near the muzzle. The stock is in about GOOD+ to VERY GOOD condition, and would rate better, were it not for a significant repair to the buttstock. A long diagonal crack is present at the rear of the wrist, angling from the end of the comb on the top to the middle of the toe on the bottom. The crack appears to be the result of an inherent weakness in the wood, as the buttstock has uncharacteristically exaggerated spiral graining that radiates from the upper rear of the buttstock, through the lower wrist. The crack appears to be massive failure due to the weakness of the wood due to the grain in that area. The crack was repaired long ago, possibly during the period of use. The repair is well executed and uses the original buttstock, but does not appear to have been done during modern times. As noted previously, the stock is marked with both the Sarson & Roberts makers mark, and with a pair of triple stamped cartouches. It is possible that the musket was originally inspected and accepted at Springfield, and then damaged prior to the gun leaving the armory. The stock was then repaired, the cartouches were defaced, and the stock was sold to Sarson & Roberts for their contract. This would no doubt qualify as one of the 4th rate guns that they delivered to the government. The stock retains very good edges and lines throughout, with any rounding the result of normal use. The balance of the stock shows only the usual bumps, dings, minor dents and scratches that one would expect to find on a 150 year old military musket.

Overall this is really great example of one of the rarest of all the US M-1861 contract rifle muskets. Only 1 out of every 266 M-1861’s were produced by Sarson & Roberts. Of those 5,643 Sarson & Roberts guns delivered, it is likely that only a few hundred at most were produced with the Springfield locks. Today only a handful of the guns with Springfield locks and Roberts marked stocks are known to exist. For the collector of the truly scarce examples of Civil War rifle muskets, this is a gun that I can practically guarantee that you don’t have in your collection. Even a collection that concentrates on the US M-1861 and its contract variants is unlikely to have a Sarson & Roberts gun in it, let along a stock marked gun. If you are an advanced collector of Civil War infantry long arms, this is a gun that you will be very proud to add to your collection and display with your other scarce muskets.