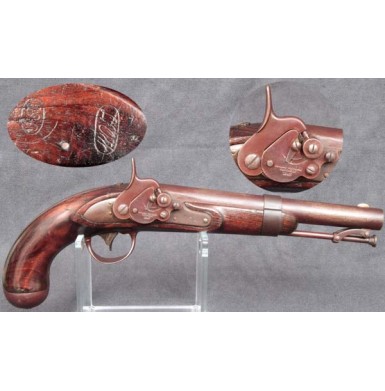 This is one of the scarcest of all US martial single shot pistols. The pistol is a Nippes-Maynard automated primer alteration of the US M-1836 Flintlock Pistol (Flayderman 6A-037.5). The alteration is so rarely encountered on the market that Flayderman notes that “Values estimated high four to low five-figure range”, and fails to provide an actual range of values for these unique alterations. The US M-1836 Pistol was the last of the single-shot martial flintlock pistols to be authorized and contracted for by the US government. Between 1836 and 1844 a total of 41,000 of the pistols were ordered from Asa Waters of Millbury, MA and Robert Johnson of Middleton, CT. The guns were .54 caliber, smoothbores and utilized a permanently attached swivel ramrod mounted under the muzzle. Waters delivered more than 50% of the guns ordered, with Johnson delivering a total of 18,000. During the years leading up to the Civil War, many of these pistols were sent to the various states as part of their annual allotment of arms under the Militia Act of 1808. Little is known about the number of pistols altered to use Dr. Maynard’s automated tape priming system, but some information can be gleaned from the contract let to Daniel Nippes of Mill Creek, PA to alter US M-1840 flintlock muskets to the same type of priming mechanism. Nippes received a contract on February 9, 1848 to alter 1,000 M-1840 flintlock muskets to this priming system. The agreed upon rate was $4.00 per musket. A second contract for an additional 1,000 muskets was subsequently let to Nippes on November 20, 1848, at the rate of $3.00 per musket. All of Nippes musket deliveries were received by the Ordnance Department between February 3, 1849 and August 27, 1849. NO additional contracts for this pattern of musket alteration were let and today, these Nippes-Maynard altered muskets are very scarce and regularly sell in the mid 4-figure range. It can only be presumed that Nippes was contracted to alter a number of US M-1836 pistols during this same time frame, so the alterations were likely done between 1848 and 1849. The Nippes musket alterations were Nippes produced muskets that had been inspected by Armory Sub Inspectors William Anderson Thornton and Joseph Hannis. Except for a handful of the earliest alterations, all of the subsequent muskets show their original “WAT” and “JH” script inspector’s cartouches, and secondary acceptance marks of a block “WAT” and block “JH”. The theory proposed by researcher and author Peter Schmidt is that these block letters were the inspection marks applied by Thornton & Hannis after the alterations took place. The sample group of existing Nippes altered US M-1836 pistols is so small (perhaps only a handful), that there is no known pattern for additional inspectors marks.

This very attractive US M-1836 Nippes Alteration pistol is in VERY FINE+ overall condition. It is not clear whether this pistol was originally one of the Waters or one of the Johnson contract pistols, as the maker information found on the lock was obliterated when the automated priming mechanism was installed. The breech of the pistol is clearly marked in three lines: U.S. / NWP / P. The NWP is the mark armory sub inspector Nathan W Patch, who worked for two decades from 1831-1851, inspecting everything from Colt Walker & Dragoon pistols, to US M-1816 muskets, Hall M-1833 & M-1840 carbines, as well as a variety of swords. The stock flat opposite the lock has two excellent cartouches that are very crisp and fully legible. One is a fabulous WAT for Captain William Anderson Thornton, who inspected arms from 1840 through 1866. Thornton’s inspection career included not only US M-1836 and M-1842 pistols, but the Massachusetts Arms “Adams’ revolvers, M-1842 Navy pistols, Remington-Beals and Savage revolvers, as well as Colt Patterson, Walker and Dragoon revolvers. The other cartouche is a wonderful JH, the mark of armory sub-inspector (ASI) Joseph Hannis who worked from 1837-1862. Hannis inspected a wide variety of arms during that time including Hall M-1843 carbines, and muskets by most of the early contractors including Waters, Johnson, Starr and Pomeroy, along with the M-1836 pistols. There is also a small block, italic H stamped at the rear of the stock flat, near the trailing point. This may be the post-alteration inspection mark of Hannis, much like the block “JH” mark found on the Nippes altered muskets. The door of the Maynard tape priming system is clearly and crisply marked in three lines:

The lock is 100% complete and correct and fully functional. It even retains a partial roll of Maynard priming tape within the magazine concealed by the downward swinging hinged door. The pistol has a lovely, smooth bronze-brown patina over the majority of the metal parts. The tail of the lock still retains some traces of the original case hardening, but the balance of the metal shows a smooth brown color. There are some scattered patches of light peppering and minor pinpricking on the metal surfaces, most of which are confined to the breech area and a few patches on the left side of the barrel, barrel band and side-plate extension. These areas of pinpricking on the left side appear to be from storage over the years, with the pistol likely having been displayed laying on its left side on a cloth background that absorbed moisture and humidity and then transferred it to the metal areas in contact with the cloth. The pistol remains in mechanically excellent condition, from the primer mechanism to the hammer and trigger to the captive ramrod that is located under the barrel of the pistol. The rod and its furniture are all original and correct. The .54 caliber smooth bore of the pistol is dark and somewhat dirty and shows light oxidation and minor scattered pitting along its entire length. The bore may improve with a cleaning, but it is of no real consequence, considering the rarity of the pistol. The stock is in FINE to NEAR VERY FINE condition as well. The stock is very crisp and sharp with wonderful edges and a fine reddish brown color. The stock shows minor handling marks, with some dings, bumps and rubs and a couple of scratches. The only real issue with the stock at all is a V-shaped grain crack that emanates from the tail of the lock mortise and travels in an upward, V pattern to the grip tang behind the barrel tang. The lower portion of the grain crack is about ““ in length, and the upper potion is about 1 ““ in length. The crack is tight and with the grain and appears to be a surface grain crack that is not structural. It in no way detracts from the overall displayability of this incredibly rare pistol. There is also a tiny and barely noticeable surface grain crack that runs from the rear lockplate screw to the barrel channel. It is only about ““ in length and truly appears to be a non-structural surface crack along the grain. This is likely the result of the lockplate screws having been over-tightened at some point in time. As previously mentioned, the left flat retains two excellent and very crisp inspectors cartouches. Overall, the stock has a very crisp and pleasing look to it that is truly attractive.

Simply put this is probably the rarest US martial arm that I have ever had the pleasure to offer for sale. I have had a number of guns that were produced in very small numbers (300-500 or so), but it is likely that less than 100 of these very scarce pistols were ever produced. Flayderman even hypothesizes that they were experimental or prototype pieces. In trying to value this pistol I did a significant amount of research, and could only find one sale in recent history, an auction realized $12,500! This is really an absolutely stunning example of a very scare US marital pistol and it may be many years before another one is on the market. The pistol will be an outstanding addition to the most advanced and discriminating collection and will most likely become a centerpiece there. I am absolutely confident that the new owner of this wonderful piece of American martial history will be as pleased with the acquisition as I am to offer it for sale.