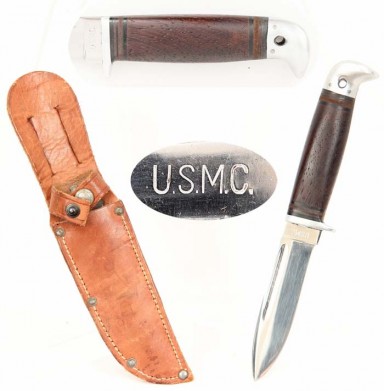 This is a VERY FINE+ example of the very scarce and desirable Western Parachutist No. W31 Knife, which is better known to collectors as the Marine Parachutist Knife or Paramarine Knife. The Marine Parachutist battalions, of which there would eventually be three, was established in October of 1940. Like the parachute regiments within the US Army, the Marine Corp parachutists were all volunteers, who were required to be unmarried, and would be subject to intense training in order to qualify as “Paramarines”. The first group of Paramarines was trained at the Naval Air Station in Lakehurst, NJ and formed the core of the 1st Marine Parachute Battalion. The second group was trained there in December of the same year, establishing the core of the 2nd Marine Parachute Battalion. The 3rd Marine Parachute Battalion was made up of men trained at Camp Kearney near San Diego, CA during the first part of 1941. In May of 1942, after the United States entered World War II, a new training camp for Paramarines was established at Camp Elliot, near Camp Kearney. This camp was specially designed for the training of the Marine parachutists. The Marine Parachutists first combat came on August 7, 1942 with the invasion of the Japanese held island of Guadalcanal. The 1st Marine Parachute Battalion was assigned to invade the two small islets of Gavutu and Tanambogo, to help secure Guadalcanal. After bitter fighting the 361-man battalion suffered 20% casualties and was no longer an effective battalion sized fighting force. The remaining Paramarines were assigned to reinforce the 1st (Edson’s) Marine Raider Battalion, on the island of Tulagi. On September 8, 1942 the combined Raider and Paramarine force landed on Guadalcanal and attacked the village of Tasimboko. After the raid, the group established a defensive line on Lunga Ridge, where they fought off multiple vicious Banzai attacks. The first planned parachute jump by the Paramarines was for the Bougainville campaign in late 1943. However, the plan to jump was called off for a number of reasons, not the least of which was the belief that the casualties would be too high. During this same time frame the 3 battalions were reorganized as the 1st Marine Parachute Regiment, although they never really fought together as a coherent regiment. As a result of the decision not to jump, the 2nd Marine Parachute Battalion was selected to make diversionary strikes on the island of Choiseul (about 30 miles east of Bougainville), and the 1st Marine Parachute Battalion raided supply depots along the Bougainville coast, working with the 2nd Marine Raiders. The 3rd Marine Parachute Battalion landed on the island attached to the 3rd Marine division, and all 3 battalions fought through the remainder of the campaign, until they were relived in January of 1944. During this time, the Marine high command reanalyzed the Marine Parachute Battalion concept and came to the determination that due to the jungle environment that the Marines were fighting in, there was really no need for this specialized group of men. The Marine Commandant officially ordered that the Marine Parachute Battalions be disbanded on December 30, 1943 and they were removed from service on February 29, 1944. Many of the former Paramarines were rolled into the revitalized 5th Marine Division and subsequently took part in the invasion of Iwo Jima on February 19, 1945. Among those former Paramarines were Corporal Harlon H. Block and PFC Ira H. Hayes, both of whom were immortalized in the iconic Joe Rosenthal photograph of the raising of the American flag on Mount Suribachi, 4 days after the landing. Among the roughly 3,000 men who served as Paramarines during WWII, five would be recipients of the Congressional Medal of Honor. Although specially trained as parachutists, the Paramarines never jumped into combat, and spent their term of service fighting as typical Marine infantrymen.

While in training at Camp Elliot, the Marine Parachutists were issued a special knife, the Western Parachutist No W31. In theory the knives were to be returned after training was completed, but this almost certainly never happened, and some sources note that the knives were available for sale to the Paramarines as well. Some well-worn extant examples are known with inventory numbers stamped into their guards, suggesting that these were the training knives that were issued at Camp Elliot, and the knives without such numbers were acquired either privately or outside the parameters of training. Sources vary regarding the number of knives produced, but the general consensus seems to be around 400, which is an incredibly small number for any military knife. The famous Western Cutlery Company of Boulder, Colorado, produced the knives and like most Western products were very high quality. The knife resembled a typical outdoor utility knife, with a drop point blade and a wood grip. The knife was 8 5/8” in overall length, with a 4 3/16” blade that was just under a 1” wide at the ricasso and was about 3/32” thick. The blade was highly polished steel, leading some to believe (incorrectly) that the knives were plated. The knife had an aluminum hilt and pommel cap, with Cocobolo grip scales and black Bakelite and leather washer spacers at the guard and pommel. The pommel had a hole for a lanyard, and was secured to the tang with two pins. The reverse ricasso was marked U.S.M.C., and the reverse of blade had a narrow 2” fuller. A simple leather scabbard with a short hilt-retaining strap accompanied the knife. Two versions of the scabbard were provided, with the “early” variant having an embossed pattern on the leather scabbard body, and the more commonly encountered version having a plain leather body. The scabbard was sewn with a single row of thread and reinforced with five domed rivets. The hilt strap was closed by a simple snap. Despite conflicting reports about production numbers, the very few examples of this knife that remain in collections today make this one of the rarest and most sought after of Marine Corps edged weapons, and a real centerpiece in any advance Marine Corps collection.

This particular USMC Marine Parachutists Knife is in VERY FINE+ condition, bordering on “near excellent”. The knife is full length, completely original and is accompanied by a correct pattern original scabbard that is probably original to the knife. The knife retains about 95%+ of its original highly polished blade finish, and is very reflective, making it difficult to photograph. The reverse ricasso is crisply marked U.S.M.C.. The knife has been very lightly sharpened, but this is not really noticeable on the blade edge itself. Rather, the appearance of the very tiny, fine, light scuff lines on the blade reveal that the edge was enhanced at some point in time. Clearly this was done very carefully and lovingly, probably during the period of use when the knife needed a very keen edge. The aluminum mounts remain equally bright and shiny, and match the blade very well. The Cocobolo grip is in NEAR EXCELLENT condition. It shows practically no wear, and only the most minor handling marks, with some very light scuffing on the washers being the only wear worth mentioning. The knife is contained in a FINE condition original scabbard, which is complete with the original closure strap. The snap on the strap functions correctly, and securely closes the strap. The scabbard body shows some light wear and minor scuffing, while the attached belt loop shows slightly more wear and some very minor crazing. The scabbard stitching remains in tact, original and tight and all of the original domed reinforcement rivets are securely in place.

Overall this is an extremely fine condition example of a very scarce and desirable Paramarine Knife. These knives rarely come up for sale and when they do they are very expensive. Rough condition examples regularly sell in the $2,000 range, while pristine examples can easily command $5,000. This is a really fine example that displays wonderfully, and would probably need to be replaced by a $5,000 knife in order to upgrade it. This will truly be the centerpiece of your advanced US military knife collection, or your USMC collection. This is a fabulous original example that you will be very proud to own and display.

Special thanks to Doug Bailey who provided most of the information about the use of these knives to MH Cole many years ago. To this day, little good information is available about these scarce USMC knives.