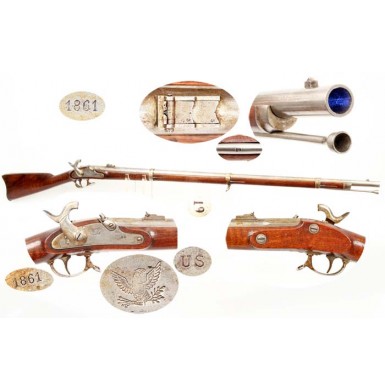 Of all the imported arms utilized by the US government during the American Civil War, the SUHL Contract M-1861 Rifle Musket is probably one of the most desirable and most difficult to obtain for a collection. In fact, the authors of Firearms From Europe (2nd Edition) describe the gun as “one of the rarest of all Civil War weapons” and further note that “Only a handful are known to exist”. The details regarding these handmade Germanic copies of the US M-1861 rifle musket are not particularly clear, but it appears that the guns were probably produced by Christian Funk of Suhl (which was located in the German state of Thuringia), and were most likely imported by William Hahn of New York. According to US Ordnance Document records, Hahn delivered 481 “German Muskets, Springfield Pattern”, at prices that ranged from $14.50 to $16.50 each. The deliveries were made in two lots, with 179 being delivered March 7, 1862 and the balance of 302 being delivered on July 15, 1862. Schuyler, Hartley & Graham of New York delivered an additional 400 “Suhl Rifles’ and “Suhl Rifle-Muskets’ to the US Government between February 17 and March 10 of 1862. However, the pattern of these arms is not noted in the delivery documents. The majority of the rifle-muskets of Germanic origin that were delivered by Schuyler, Hartley & Graham were of the Enfield pattern, making it likely that these 400 guns of “unspecified pattern” were also of the Enfield patter and not M-1861 types.

The Suhl “Springfield” was essentially a handmade copy of the US M-1861, and was a .58 rifled musket with a 40” round barrel. The breech area of the musket had a large octagonal section; making is somewhat bulkier in that area than the standard US muskets. As the guns were handmade, they did not feature interchangeable parts, which meant that to the US Ordnance Department they were still “2nd Class’ arms, even though they were the standard .58 caliber. The extant guns are known with various markings, but the two consistent features on all known examples are the unique “Spread Winged Eagle” on the lock plate, and the assembly numbering of the component parts of the gun. Some guns are known with the CH FUNK / SUHL lock markings and some bear no makers mark at all. At least two styles of “US’ markings on the lock are known, and proof marks vary among the handful of known specimens, with some marked externally and some marked under the barrel. All known examples are dated 1861 on both the lock and the top flat of the breech. Some are known with US inspectors cartouches on the stock flat and some are known with no such marks. At least one example is known with an “OHIO” stamp, but that would have been applied by the state of Ohio when it received several lots of surplus and second-class arms from the US Government in 1863-64 to recompense the state for arms it had provided to its volunteer troops at the beginning of the war. Authors have referred to the guns as having stocks made of “maple” or “light colored European walnut”. From my observations of a handful of extant examples, the guns were stocked in either the light European walnut, or possibly beech, which would have been the typical wood found in Prussian arms of the time. It is possible, however, that a contract to produce US pattern arms would have specified the type of wood to be used in the stocks.

The Suhl Contract US M-1861 Rifle Musket offered for sale here is in about VERY FINE condition. The gun appears to be 100% complete and correct and nearly every part is marked with the assembly number 19, although in some cases the marks are weak or difficult to see. The majority of the external markings remain extremely crisp, and sharp throughout, with only some of the assembly numbers showing any particular wear or weakness. The metal has been lightly tin plated, almost certainly right after the war when the musket probably hung in a Grand Army of the Republic (G.A.R.) Hall. The tin plating is quite thin and has flake and worn so that only about 70% of it remains. The new owner can decide if he wants to remove the balance of the plating or not. The metal shows some minor staining from very light surface oxidation and some old dried grease or oil that has left brownish patches scattered on the metal. The metal is almost entirely smooth, with only some scattered areas of very minor pitting and some light pinpricking. The tin plate has preserved the metal very well. The lock is mechanically excellent and functions crisply and correctly on all positions, with the hammer responding to the trigger exactly as it should. The lock is clearly marked with the date 1861 horizontally to the rear of the hammer, and with the unique (Spread Winged Eagle) forward of the hammer in the upper center portion of the lock, behind the bolster. The front edge of the lock is marked U S, with the same mark applied to the buttplate tang. The top of the breech flat is clearly marked with a matching 1861 date as well. There are no other external marks on the barrel other than the date on the breech. The bottom of the barrel is marked with a variety of foreign assembly and proof marks. The bottom of the barrel is marked with two deeply depressed diamond shaped proofs that appear to have the number 6 inside them. The bottom of the barrel is also marked SUHL and Gr. 1, the meaning of which is unknown, but is probably a proof mark. The bottom of the barrel and the bottom of the breech plug are both assembly numbered 19. This same assembly number is present inside the lock, on the inside neck of the hammer, on the bottom of the buttplate, inside the trigger guard, on the necks of the screws, on the sides of the barrel bands, on the bottom of the rear sight base and on the swell of the ramrod. The bore of the musket is in about VERY GOOD condition with deep, crisp rifling along its entire length. The bore shows light pitting scattered along its length, with some scattered patches of more moderate pitting present as well. The gun retains its original and correct multi-leaf rear sight, which is copied from the US M-1858 pattern sight. This indicates that the pattern gun that Funk used to produce these rifle muskets was produced prior to July of 1861, when the Ordnance Department adopted the new M-1861 pattern sight, designed by Elisha K. Root of Colt’s Patent Firearms. The sight base even includes the “steady pin” and the barrel has a “steady pin notch”, features that were standard on US M-1855 Rifle Muskets from 1858-1861, but was quickly phased out on the M-1861 and only appears on the earliest muskets. The gun also retains both original sling swivels and its original swelled-shank tulip head ramrod. The rod is full-length and retains the original threads at the end and is numbered to the gun on its swell. The stock rates about VERY FINE as well, and is solid without any breaks or repairs. The stock is extremely crisp with very sharp edges and lines throughout, showing no indication of having ever been sanded. There are no visible cartouches on the musket stock and it does not appear to have ever been so marked. The stock shows the usual scattered assortment of bumps, dings and other handling marks from use in the field, but shows no real abuse. Even the ramrod channel remains crisp and sharp with practically no splintering or chipping. The stock has a light brown color with a slightly orange tone (really almost honey colored), which is reminiscent of the Germanic beech wood found in Potsdam and Lorenz musket stocks. The wood to metal is very fine throughout, every bit as good as the fit and finish found on many US contractor made guns.

Overall this is an extremely high condition example of a very scarce imported rifle musket. It is unlikely that more than a few hundred of these German made M-1861 rifle muskets were purchased during the course of the war. There are truly only a handful of these guns known today, with most of them in museum collections. These guns practically never come on the market for sale, and for the advanced collector of unique, imported Civil War martial arms, a Suhl M-1861 is truly a “Holy Grail” acquisition. This is a great opportunity to own a really nice displaying example of one of the absolute scarcest of US imported arms to be used during the American Civil War. It may be years before another one is available, and this is only the second one I have had the opportunity to offer over the past 10 years.