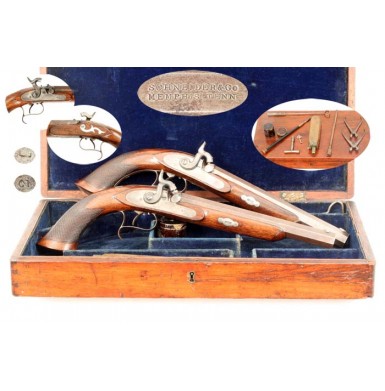 William S. Schneider was a gunsmith and gunmaker working in Memphis, TN during the tumultuous years leading up to the American Civil War. He is probably most famous as the partner of Frederick Glassick, who made up the second half of the firm Schneider & Glassick. Schneider & Glassick repaired hundreds (if not thousands) of guns for the Confederacy during the twelve-month period from April 1861 to March of 1862. They are also credited with producing (or at least retailing) one of the rarest of the secondary Confederate revolvers, the Schneider & Glassick, of which only about 20-50 are believed to have been manufactured and only 3 or 4 authentic specimens are known today. The work they performed for the southern Confederacy ranged from simple repairs of locks and mechanisms to altering shotguns for cavalry use by “cutting off” barrels and probably adding musket sized cones (nipples) and sling rings or swivels. According to Frank Sellers’ American Gunsmiths William S. Schneider worked under his own name (or as Schneider & Co) in Memphis from 1859-1873, worked as Schneider & Glassick from 1860-1862 and Frederick Glassick worked under his name (or F. Glassick & Co) in Memphis from 1840-1864. Apparently most of these dates and research are wrong, as delving into Memphis City directories that are available online reveal that the two men were both working out of the same location for most of their careers and were working under the name “Schneider & Glassick” much earlier than had been previously thought. The 1849 Memphis City Directory lists neither man in business in Memphis, suggesting that Glassick was probably not working there prior to about 1850. The 1855-56 City Directory for Memphis lists “F Glassick “ Gunsmith” working on Jefferson Street (between Main & Front) and “William S. Schneider “ Gunmaker” at 20 Jefferson Street. This same directory also lists “Schneider & Glassick “ Gunsmith” also at 20 Jefferson Street. The next available directory is for 1859, and both men are again listed individually as “gunsmith” (Glassick) and “gunmaker” (Schneider). The firm “Schneider & Co” is also listed as “gunmakers”. The next available directory is a post Civil War 1865-66 directory that no longer lists Glassick, but does list “Wm Schneider Gunsmith 193 Main”. Schneider disappears from the 1866 directory but reappears at 42 Washington Street in 1867, where he remains in business through 1873. The 1874 directory lists “Mrs. Wm. Schneider “ Gunsmith Shop 42 Washington”. No 1875 directory is available, but even “Mrs. Wm. Schneider” is no longer listed as of 1876. What is interesting is that apparently Schneider & Glassick made a go at working as partners around 1856-57, but apparently gave up by 1859. They then reunited about 1860 and worked together through the fall of Memphis in mid-March of 1862. According to a January 3, 1858 advertisement by Schneider & Company in the Memphis Daily Appeal, the firm wanted to: “Return thanks to their friends and the public in general, for their liberal patronage for the last two years, and to inform them that they keep on hand a large assortment of fine GUNS & PISTOLS of their manufacture. Also: DERRINGER & COLT’s PISOTLS”. The ad goes on to list the other related items offered by the company. This advertisement clearly places the establishment of the firm Schneider & Co sometime around January of 1856 (two years earlier). Although his ad clearly states that he offered “guns and pistols, of their own manufacture”, the handful of extant examples that bear the Schneider & Co mark are all guns that were manufactured by other makers and then retailer marked by Schneider. Most examples are small “derringer” style pistols, which are generally believed to have been manufactured by Franz Bitterlich of Nashville, TN. To my knowledge, only a handful of pistols are known to be marked by Schneider that are not “derringers”, and of those I am only aware of two double cased pistol sets that bear his name.

Overall this is a really wonderful and about fine set of very scarce Schneider & Co marked Memphis percussion pistols c1856-1860. The guns are very high quality and appear to have been manufactured by a St. Louis gunsmith who also worked for the famed Hawkens. To my knowledge only one other set of “belt” sized cased, Schneider marked pistols are known. As nearly all Schneider marked guns are of the “derringer” or “pocket” size. This set was discovered in an old home in Memphis during the 1960s and has been part of some of the most famous and heralded southern pistol and arms collections in the south. Over the years this set has been part of the Frank Berry II collection, the John Montague collection and the John Ashworth collection. It is harder to imagine better provenance when it comes to southern retailer marked (especially Tennessee and Memphis marked) arms. This wonderful set will be a real centerpiece in your collection of high quality antebellum southern pistols, and you will probably never see an opportunity to buy such a set again. These are wonderful, unmolested guns that belong in a very advanced collection.