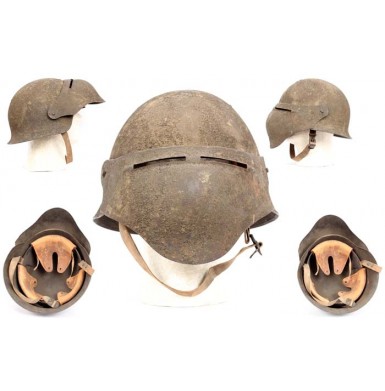 This example of the US Experimental #8 Helmet is in VERY FINE to NEAR EXCELLENT condition. The helmet is 100% complete and correct in every way and displays wonderfully. The shell is free of any dents or dings, as is the visor. The exterior retains about 80%+ of its original glare reducing textured olive drab paint. The loss is mostly confined to the high points and areas of handling and contact. Even where the paint has worn or flaked, it is mostly the textured portion that is missing, with the underlying olive drab color remaining in place. The helmet exterior shows some scattered areas of dust, dirt and minor discoloration, all of which could probably be carefully cleaned. I have elected not to do so in order to try to keep the textured paint exterior in this untouched condition. There are also some small, scattered patches of light surface oxidation and minor discoloration. The interior of the helmet retains about 90% of its original olive drab paint as well. The visor of the helmet is complete and in wonderful condition. It moves smoothly and functions exactly as it should. The interior of the helmet retains the entire complete suspension and pad system. The original steel hoop is in place, as are all three wool cushions and the three leather pads. The wool cushions are in fine condition with little loss. The leather pads are in about good condition, and show some significant drying and flaking of their finish. They retain only about 40% of their original surface finish. The front pad shows some tearing at both ends, at the flex point where the pad meets the steel suspension hoop. The pads are all in delicate condition and should be handled carefully. The pads retain all of their original enameled metal grommets, with the exception of a single missing grommet that has torn out of the end of one of the leather flaps. The grommets were for an adjustment thong that brought the flaps together and adjusted their fit against the crown of the head. The remnants of the twill cotton adjustment tie remain in the pads. This was also a tensioning device to adjust the fit of the pads to the head. The original US M-1917 chinstrap is in place and remains fully functional. The fabric strap is somewhat stiff, but still adjusts smoothly and the stamped sheet metal closure hook still functions correctly.

Overall this is really outstanding condition example of an extremely rare US #8 Experimental Helmet. These helmets are very rarely found for sale, and when they are they are often in much more worn condition. I have actually seen helmets with only the remnants of their original lining and suspension (and significantly less original paint) sell in the $6,000.00 range. In reality it is difficult to find a #8 helmet with such a complete and fine interior as this one has. It is also equally hard to find a #8 helmet with nearly all of its original finish. Several knowledgeable collectors consider this example to be the finest example that they have ever seen. If you are a serious collector of US military helmets, this is one of the absolute “Must Have” helmets that you need for your collection. This is one of the most dramatically striking helmets to have ever been designed by the US military, and would be a perfect center piece for any advanced US helmet or Great War display.