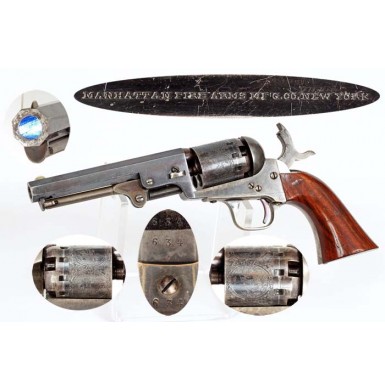 This is an EXCELLENT condition example of a scarce Series I Manhattan .36 Caliber (“Navy Type”) Revolver. Although the .36 caliber “Navy” revolver was a late comer to the Manhattan Firearms Company’s product line, it would become a mainstay of it and would eventually represent more than 50% of the total output of the company during their 12 year lifespan. The Manhattan Firearms Company was established in 1856 by a group of New Jersey businessman and was incorporated in New York City. Although named “Manhattan” and incorporated in New York City, the company never produced any firearms in that city. The company established their first factory in Norwich, CT, and enlisted the services of Thomas Bacon as the factory superintendent. Bacon would subsequently establish his own company in Norwich, producing a line of firearms that closely modeled those made by Manhattan. The initial Manhattan product line consisted of a variety of single shot pistols percussion in .31, .34 and .36 calibers with bar hammers, and a .36 single shot percussion pistol with a conventional or “shotgun” hammer. They also produced a line of double action percussion pepperbox pistols in 3, 5 and 6 shot variants with a barrel length ranging from 3” to 5”. Most were .28 caliber, but a handful of .31 pepperboxes were produced as well. These pistols helped to establish the company and were produced from the beginning of business in 1856 through the late 1850s. In 1858, Manhattan introduced their first traditional single action percussion revolver, a .31 pocket model whose design closely copied the Colt M-1849 Pocket model. The pistol was the beginning of a nearly decade long run of producing popular, reasonably priced percussion revolvers for the civilian market. Unlike most 19th century American firearms companies, Manhattan never seemed to covet or attempt to secure any military contracts and concentrated instead on selling guns to the mass populace. In March of 1859, the company moved their manufacturing facilities to Newark, NJ and it was here that they started production of their single most successful and long lived product line, the .36 Caliber “Navy” Revolver. The pistol was a unique combination of features that clearly indicated civilian sales were the company’s goal. The gun combined the stopping power of a .36 caliber ball from the Colt M-1851 Navy, with the compact frame size of the Colt M-1849 Pocket. While the Colt “Navy” was clearly a holster pistols (as referred to by the colt name for the model “New Model Holster Pistol of Navy Caliber”), the new Manhattan product was smaller, lighter and easily carried in coat pocket. Rather than the 6-shot cylinder of the Colt, the Manhattan offered only a 5-shot cylinder. The designers at Manhattan must have had their finger on the pulse of public opinion, because they produced approximately 4,000 “Navy” revolvers the first year they were offered, and some 78,000 by the time the company went out of business in 1868. Their market success was probably best indicated by the fact that Colt introduced two similar, competing 5-shot, small frame .36 caliber models during 1862 and 1863, the Pocket Police and the Pocket Model of Navy Caliber. As with any 19th century fire that was produced in quantity over nearly a decade, the .36 Manhattan revolvers underwent changes and modifications during manufacture. These specific changes and improvements were clearly delineated by Waldo Nutter in his classic work on the subject, Manhattan Firearms. The system of classification from his 1958 book is still in use, and his book still remains the most through examination of the subject matter. Nutter established 5 “series’ of .36 Manhattan revolvers, and established the features and serial number ranges that allow us to classify the revolvers today. The Series I revolvers appear in the 1-4,200 range (manufactured circa 1859), and have a one line New York address on the barrels. Other features found on some very early Series I guns are trapezoidal cylinder stop notches, fatter than usual grips and 3-groove rifling. Series II revolvers are found in the 4,200-14,500 serial number range (circa early 1860 - September 1861), and have the same barrel markings as the Series I guns, but add an 1859 patent date marking on the cylinder. Series III revolvers are found in the 14,500-45,200 serial number range (September 1861 - April 1, 1864) and include a new barrel marking indicating the guns were made in Newark, NJ. The Series III guns experimented with a spring plate between the cylinder and the face of the recoil shield to prevent chain fires between the cylinder chambers, but the feature was only included in a few of the guns. The Series IV guns are found in the 45,200-69,200 serial number range (April 1, 1864 “ June 1867) and incorporate the spring plate first introduced on a trial basis of the Series III guns. They also bear a new barrel address that adds a second line giving the March 8, 1864 patent date for the spring plate feature. The final version of the revolvers, the Series V were produced in their own serial number range from 1-9000 and were in production from July of 1867 until the company went out of business in December of 1868. The most relevant feature of the Series V was a new, larger, 6-shot cylinder. Throughout production the revolvers were .36 caliber, with a single action lock mechanism and five groove rifling (with the exception of a few very early guns with 3-groove bores). The standard finish was blued barrels and cylinders, with color case hardened frames, hammers and loading levers, and a silver-plated brass frame and triggerguard. The cylinders were roll engraved with five panel scenes depicting a variety of scenarios including sailing ships, men firing pistols at charging infantrymen, a wounded solider firing at a cavalryman, men rowing a boat, and a cavalry charge against infantry. The one-piece walnut grips were varnished. The revolvers were available with standard barrel lengths of 4”, 5” and 6 “, but a handful of odd factory barrel lengths were also produced, including 6. The revolvers were so popular during the Civil War era, that Manhattan was producing about 1,000 “Navy” revolvers per month between 1861 and 1865.

This particular Manhattan Navy Series I Revolver is in EXCELLENT overall condition. The pistol is one of the extremely desirable “first 1,000” guns manufactured in 1859 (serial number 634) that are usually encountered with uncommon features, only associated with the earliest production pieces. While the gun does not have the coveted trapezoidal cylinder stops (they were clearly being phased out by the time this pistol was produced), it does have the over-sized “fat” grips only found on Series I guns under #1,000 and a 3-groove bore, rather than the standard production 5-groove bore. The pistol is clearly and crisply marked on the top of the 5” barrel: MANHATTAN FIREARMS MFG. CO. NEW YORK. There is no patent date on the cylinder. The gun is serial number 634 and is so marked on the bottom of the barrel web, the bottom of the frame, the front of the triggerguard plate, the rear of the cylinder, the cylinder arbor, the loading lever plunger, the barrel wedge, on the bottom of the grip strap and inside the grips. The gun is 100% complete and correct in everyway and is in a really outstanding state of preservation. The barrel retains 95%+ of the original bright blue finish, with only a few minor surface scuffs and high edge wear affecting the blue. There are a few minor scuffs and dings around the wedge hole at the rights side of the barrel as well. The cylinder retains about 70%+ of its original bright blued finish and 97%+ of the 5 roll engraved panel scenes. The frame and hammer retain about 95%+ of their original vibrant case coloring with only some very minor fading and muting of the coloration, which is most notable on the right side of the hammer, where the colors have blended to more of a mottled smoky gray patina. The loading lever retains about 50%+ original vivid case coloring, mostly on the large web to the rear of the round lever. The round portion of the lever has a faded silvery gray patina, and the plunger has a dark, smoky blue-gray patina where the case hardening is fading. The trigger retains about 80%+ vivid fire bluing, which is starting to fade toward a brilliant plum color. All of the screws remain sharp and crisp with much of their original blued finish and little or no slot wear. The only exception of the right hand frame screw at the backstrap to frame juncture, which shows moderate slot wear. The silver-plated brass grip frame and triggerguard retain about 95% of their original silver plate, which has a dark gray, deeply tarnished patina. The only real loss silver is along the high edges and contact points of the triggerguard, and grip. The original, German silver front sight blade is in place on the top of the barrel, and the original sight notch in the hammer nose remains crisp. All of the original cones (nipples) are in place in the rear of the cylinder and remain quite crisp and sharp, with no significant wear or battering. The rarely encountered 3-groove bore is in VERY FINE condition and is bright with crisp rifling. There is some lightly scattered pitting in the grooves along the length of the bore, as well as a couple of small patches of light pitting around the middle of the barrel. None is serious and the bore is really in as wonderful condition as the balance of the pistol. There is some light to moderate pinpricking and minor surface oxidation on the face of the revolver’s muzzle, but noting this on such a wonderful pistol is truly nitpicking. The revolver is mechanically excellent and functions perfectly. It revolves, times, indexes and locks up crisply and functions exactly as it should on all positions. The one piece, early production “Miss America” grips are in EXCELLENT condition as well. The moniker for the grips was coined in Nutter’s book on Manhattan’s, where a friend of his noted that the grips should be called the “Miss America Model,” because of the(ir) fully rounded butt. Nutter further noted that the suggestion has considerable merit. It is unclear why some of the early production Manhattan .36 caliber revolvers were manufactured with these “fat”, oversized grips, but it has been speculated that the larger grips might have been thought desirable to manage the recoil of a .36 pistol made on a .31 caliber frame. Whatever the reason, the feature was quickly phased out and does not appear on guns over serial number 1,000. The grips retain nearly all of their original varnish, with only some edge wear finish loss around the lower sharp edges. The grips are free of any breaks, cracks or repairs, and show only a few minor bumps and dings and some light surface handling marks.Overall this is simply an outstanding, investment grade, example of a very early production Manhattan .36 Caliber “Navy” Revolver. The pistol is visually stunning and has some very early and desirable production features that are rarely encountered on Manhattan Navy revolvers, like 3-groove rifling and the “Miss America Grips”. If you were to only have one .36 Manhattan Navy revolver in your collection, it would be almost impossible to improve on this one. It is simply a fantastic example with wonderful markings and cylinder scene and nearly all of its original finish.