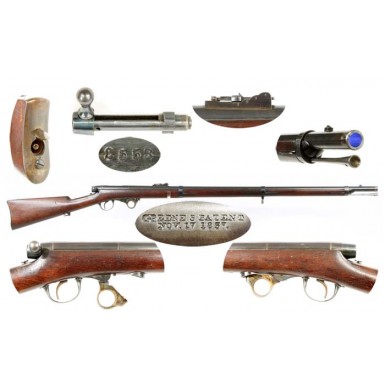 James Durrell Greene was an innovative and forward-thinking man who had a distinguished career in the US military, but is probably best known for the two breechloading military firearms that bear his name; the Greene Rifle and the Greene Carbine. Although the arms were moderately successful at best, Greene managed to secure US military contracts for both models during his career and can be credited with designing the first bolt-action rifle to be purchased by the US military.

J.D. Greene was born on May 12, 1828 in Lynn, MA. He was the son of James Diman Green, who was an ordained minister, and who also served as the first mayor of Cambridge, MA. James Durrell later added the extra "e" to his last name to help distinguish himself from his father, as their first names and middle initials were the same. James Durrell grew up with the dream of having a military career and hoped to attend the US Military Academy at West Point. However, his mother objected, so instead he attended Harvard, where he graduated with a Master of Arts degree in 1853. While at Harvard he joined the local Cambridge militia regiment, the Cambridge Guards, and rose to the rank of Captain. This was the beginning of his military career. In July of 1860, as the clouds of war began to gather, he joined the 4th Massachusetts Volunteer Militia as their Lt. Colonel. Greene would subsequently serve during the course of the American Civil War as the Lt. Colonel of the 5th Massachusetts Volunteer Infantry from May-June 1861, as the Lt. Colonel of the 17th US Infantry (Regular Army) from June 1861-September 1863, and as the Colonel of the 6th US Infantry (Regular Army) from September 1863-June 1867. In 1867 Greene would retire from the US Army with the rank of Brevet Brigadier General. While serving with the 17th US Infantry, Greene participated in some of the most horrific battles of the war, including Antietam, Fredericksburg and Gettysburg. While with the 6th US Infantry he saw combat at Chickamauga, and after the war saw reconstruction service with the regiment in Georgia and South Carolina.

The Green Rifle offered here is in EXCELLENT condition and may be the best example that I have ever seen offered for sale. The gun is 100% complete, correct and original. The rifle is devoid of any US inspection marks or cartouches, but I am not aware of any that have appeared with verifiable US military markings. The only external marking is on the receiver tang, which is clearly marked in two lines: GREENE'S PATENT / NOV. 17, 1857. The only other factory marking noted is the serial number 2553, which is stamped into the bottom of the bolt, and can only be seen by partially removing the bolt from the receiver and rotating it. The rifle is mechanically excellent, with the bolt operating correctly, and the under hammer and trigger functioning as they should. The metal of the rifle retains about 85%+ of its original blued finish, which had faded and dulled somewhat, and also shows some minor flaking and high edge wear; particularly around the muzzle. The barrel also shows some very minor flecks of light oxidation scattered through the remaining blue. The furniture of the rifle retains about 85%-95% of its original, bright niter blued finish, with the exception of the buttplate. The buttplate retains only about 30% of the original finish, which is streaky, faded and dulled, and has an oxidized brownish tone. The metal is almost entirely smooth, with only a couple of small flecks of pinpricking here and there, which is barely noticeable. The case hardened, ring shaped under hammer retains nearly all of its brilliant mottled colors, showing only some very minor fading. The oval bore in in EXCELLENT condition as well. It remains extremely "smooth" (as it should be) and remains brilliantly bright. The rifle retains its original rear sight that is quite similar to pattern found on the P1853 Enfield rifle musket, and which is graduated to 800 yards. The rifle retains its original, full-length trumpet shaped cleaning rod with a cupped head, which could double as a ramrod if necessary. The rod retains fine, usable threads on the reverse end. The rifle also retains both original sling swivels, although the upper swivel is bent slightly. Even the original cleaning brush is present, contained in the storage recess in the butt of the rifle. The stock of the rifle remains in about NEAR EXCELLENT condition and shows no signs of being sanded. The stock is solid and full length with no breaks, cracks or repairs noted. There are some lightly scattered bumps, dings and minor mars present, which are only the usual assortment of marks typical in the handling, use and storage of a 150-year-old military rifle. The only stock issue worth noting is a small scrape on the reverse of the butt, near the buttplate, probably from packing or transport.

Overall, this is a really outstanding, 100% original and complete example of the rather scarce Greene Bolt Action Rifle. These guns are far from common and represents a number of technological "firsts" for the US military; including some of the features that would never be seen in a US military firearm again. The rifle was the first bolt-action firearm purchased by the US military and was the only under hammer percussion rifle to see US military service. It was also the only oval bore firearm to see US military service. While the conservative ordnance department of the mid-1860s probably did not understand the virtues of such a futuristic firearm, it did pave the way for other bolt-action rifles that would eventually be adopted. For any US marital arms collector this would be a wonderful addition to a collection, but for the serious US martial bolt-action rifle collector this is the first gun that has to be in a collection that spans the 80+ years from Civil War through World War II. This is a simply stunning example of a Greene Rifle, complete with original bore cleaning brush, which will be a fine addition to your collection.