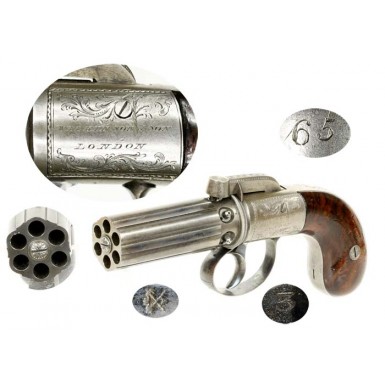 The famous London based Wilkinson Sword Company can trace its roots to renowned London gunmaker Henry Nock who had established himself in that business in 1772. James Wilkinson was Nock’s son-in-law, and was the manager of Nock’s business, which became Nock & Wilkinson in 1785. Wilkinson continued to run the business as James Wilkinson, after Nock’s death in 1804. In 1818 James’ son John would join the business, creating Wilkinson & Son. In 1829 the business moved to their famous Pall Mall address in London, where they would remain through 1888. In 1848 James passed the business on to his son Henry Wilkinson. In 1861 Henry died and the business passed to manager John Latham, and much like the passing of Nock’s business to Wilkinson, the Wilkinson business was now owned by a person whose name was not that of the company. It was during the mid-19th century that Latham changed the general direction of the business from firearms production to the production of swords and edged weapons, although they continued to retail firearms of all types into the 20th century. In 1888, Latham’s son established the Wilkinson Sword Company, LTD, which was reorganized as Wilkinson Sword LTD in 1909. During the 19th century Wilkinson retailed a large number of firearms, primarily produced by various Birmingham gunmakers, rather than in the Wilkinson shop. Later in the 19th century, Wilkinson developed a very close relationship with the firm of Webley & Son (later Webley & Scott) and offered many of the firearms produced by that company for sale. This relationship also resulted in the Wilkinson-Webley revolver. The Wilkinson Company started to serial number firearms and blades during the 1850s, and maintained fastidious records regarding the sales of these arms. Today, many Wilkinson retailed arms can be researched by serial number, and a “factory letter”, much like the Colt factory research letter can often be obtained for Wilkinson retailed arms. A research letter regarding specific Wilkinson retailed arms can be order through Richard Milner LTD it the United Kingdom. Research order forms can be obtained through the web site: www.armsresearch.co.uk. Today, Wilkinson retailer marked firearms are not often encountered on the collector market, particularly those from the percussion era, and as such these firearms are extremely collectible and desirable.

Offered here is a FINE condition example of an English manufactured pepperbox retailed by Wilkinson & Son. The left side plate of the pistol is neatly engraved in two lines:

The only other external markings are the serial number 65 engraved on the upper rear of the topstrap, behind the bar hammer, an assembly number inside the triggerguard bow, a pair of Birmingham commercial proof marks in two of the barrel flutes and numbering of the barrels, behind the cones (nipples) of each chambers. The six barrels are numbered are 0 to 5, rather than “1” to “6”. The assembly mark in the triggerguard is 3, and this same number is stamped inside each of the bag shaped walnut grips. Further disassembly of the pistol would no doubt reveal this assembly number in other concealed places.

As noted, the pistol is in about FINE overall condition. The gun is a six-shot pepperbox with 3” fluted barrels and measures about 7” in overall length. The bores of the revolver measure about .27” caliber. The frame of the revolver is crisply engraved with tight foliate scrolls on the sides, with the right side being fully engraved. The left side plate shows the engraved flourishes above and below the retailer’s mark, which is surrounded by a detailed engraved boarder. The beveled angles of the bar hammer are engraved with a matching boarder line pattern and the center of the hammer spine is engraved with decorative geometric patterns as well. The backstrap and triggerguard are engraved with matching flowing foliate motifs. The screw that secures the barrel cluster to the frame at the muzzle and the grip escutcheon screw are both engraved with a floral petal pattern. At first glance the gun appeared to have been blued, with strong traces of bright color on the barrels, along with faded and dulled finish. Upon closer inspection, and under good light, it was apparent that the gun was fully case hardened with a blued triggerguard. The barrel cluster retains about 20%-30% faded and dulled case color, which gives the barrels a mostly smoky blue-gray appearance. However, some traces of brilliant mottling are present as well. The bar hammer retains some traces of color also, as does the top of the frame around the hammer. The balance of the frame has a medium pewter gray patina, with the backstrap and frontstrap somewhat more polished in appearance from handling. The blued triggerguard retains about 30% of the blued finish, with the balance having faded and dulled to a blue-gray patina. The fire-blued trigger retains a similar about amount of bright blue as well. All of the markings remain fairly crisp and sharp, as does the engraving. The pepperbox is fully functional and mechanically EXCELLENT. It times, indexes and locks up exactly as it should. The bores of the gun remain in about FINE condition. The two-piece, bag shaped walnut grips are in about FINE condition as well. The grips retain the majority of their original varnish, with some light to moderate wear and loss from carrying and use. The grips are solid and complete without any breaks, cracks or repairs. The grips do show a variety of scattered minor bumps and dings, but nothing substantial or serious.

Overall this is a really nice example of an 1840s era Wilkinson Retailer Marked Pepperbox. The gun is 100% complete, correct and original and remains crisp and sharp throughout. This gun came from an advanced collection of Wilkinson retailer marked arms and that collector had only ever encountered a couple of Wilkinson marked pepperboxes. Whether your interest is in Wilkinson arms, mid-19th century English arms, or pepperboxes, this is a scarce gun in very nice condition that you will enjoy adding to your collection.