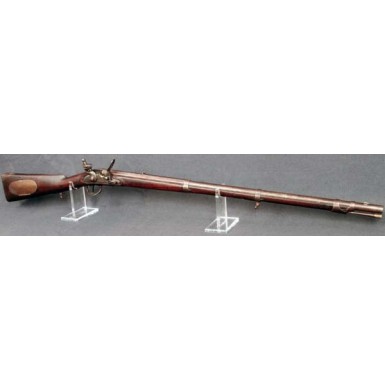 Overall this is a really attractive and essentially complete and correct (except for a couple of screws) example of a very scarce and very desirable US martial flintlock rifle. With only 2,000 of the Deringer contract rifles produced (at the most “ Robert Reilly felt that only a few hundred were delivered), these rifles are rarely found for sale on the collector market. When they are the guns are usually in very rough shape or are reconverted to flint from percussion. Finding one of these scarce guns in original flint, with the correct original ramrod and all of the small parts (like sling swivels) does not happen very often. This gun has a great look to it and displays wonderfully. The mortise cracks do not significantly detract from the display of the rifle, as the most unattractive portion is the crack under the mortise “ a part of the gun not normally seen when a rifle is displayed. With a little work by a good antique arms conservator, this area could be further stabilized and made much less obtrusive. I could have had this work done, but did not want it to appear that I was trying to hide anything “ I will let the new owner decide if they want to proceed with any repairs or restoration. For any collector of early US martial long arms, this is gun that is probably missing from their collection, and the chance to purchase one again may not happen any time soon. This is a really wonderful example of a scarce rifle that will simply look great hanging on your wall.