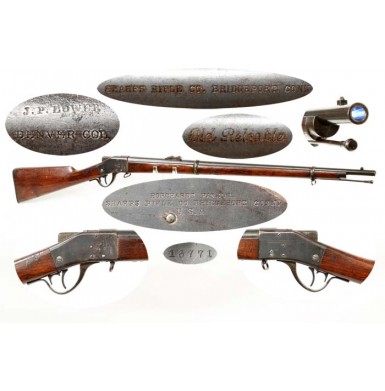 Hugo Borchardt was born in Magdeburg, Saxony (Germany) in 1844 and emigrated to the United States in 1860. He was mechanically minded and worked for companies like the Pioneer Breech-Loading Arms Company, the Singer Sewing Machine Company, Colt and Winchester. In June of 1876, he was hired as the superintendent and treasurer of the Sharps Rifle Manufacturing Company, a company that was in its death throws (although it was not obvious to the board directors at the time) and had only slightly more than four years to live. Later that year, Borchardt received a patent for a new single shot rifle action design. His new innovation was a hammerless, falling block design that incorporated a striker fired mechanism and the revolutionary use of coil springs rather than flat “V” springs. It also incorporated an automatic safety that engaged when the action was closed, requiring the safety lever in the triggerguard to be pulled to the rear prior to firing. The action was extremely strong and allowed for a much lighter receiver than on the Sharps M-1874 and M-1877 rifles. More important to the Sharps Rifle Company, the action was much less expensive to produce and was potentially more profitable. The gun went into production as the Sharps Model 1878, and like the Model 1874 before it, was actually being produced prior to the model year designation. The first order for the Model 1878 Sharps-Borchardt Rifle was placed in August of 1876 (prior to Borchardt’s patent being granted in December of that year) and was for 300 military pattern rifles for the Chinese Government. The order was accompanied by the promise of future sales, should the Chinese find the guns suitable for their purposes. Due to manufacturing delays, the first Model 1878s were not being delivered until September and October of the 1877, which lead to friction with the Chinese buyers. While the Sharps board of directors had felt that the new light weight and very strong action would find favor with long-range and target shooters, the company soon found that most of these customers were very traditional and wanted a side-hammer action. Additionally, the Borchardt trigger was not nearly as smooth and crisp as that of the Model 1874 Sharps, and one of Sharps’ largest dealers in the west, John P. Lower of Denver actually wrote the company, stating in part: “send no more of the hammerless guns. Only the old model will sell.” Lower’s complaints centered on the lack of an exposed hammer and the gritty trigger of the Borchardt design. As a result of the less than enthusiastic acceptance of the Borchardt design by sportsmen, the company found their greatest success in the selling of the military rifle variant. While sporting guns were available in nearly any conceivable barrel configuration (round or octagon and in various lengths), a wide variety of stocks, butts and sights and in a wide array of Sharps calibers, the military rifle was much more standardized. The military rifle typically had a 32” round barreled gun chambered for .45-70 (although .40-70 and .44-77 were available as well). The barrel was blued, as the receiver was typically blued as well, although about 30% were case hardened and a small percentage were plated. A checkered metal shotgun buttplate was standard as was a straight-gripped buttstock. Pistol gripped stocks were available at an additional charge. The front sight doubled as a lug for an angular socket bayonet, and two patterns of rear sights were standard. The first was an 1,100-yard adjustable leaf sight designed by R.S. Lawrence. The second was designed by the Adjutant General of Michigan and was used on the Michigan National Guard Borchardt rifle orders and was available as an upgrade to the standard rear sight. In all, the Sharps Rifle Company produced some 22,000 Sharps-Borchardt rifles from 1877 through 1881. Of those, 11,859 were of the military rifle variant. The largest order for the military rifles went to Schuyler, Hartley & Graham of New York, who acquired 3,220 for sale to South America. Other large military orders included the 300-gun order for China, 1,300 for the state of Michigan, 250 for the State of Louisiana, 100 each to the states of Alabama, New York, North Carolina and South Carolina, 50 to the states of Pennsylvania and Texas, 85 to the “Cleveland Grays’ and 35 for the Charleston, SC police force. Other interesting orders included 20 for the National Rifle Association and 20 each to the New Jersey Rifle Association, the Stockton, New Jersey Rifle Association, and the Columbia Rifle Association. In the fall of 1880 the Sharps Rifle Manufacturing Company officially failed, although they continued to produce arms through the fall of 1881. After the company finally closed its doors, Borchardt returned to Europe. There, in association with Ludwig-Lowe & Company of Berlin, he produced his C-93 model semi-automatic pistol, based upon the toggle action design of Hiram Maxim. This gun, would become the forerunner of the famous P-08 Luger pistol, and would ensure that Borchardt’s name would remain well-known to firearms enthusiasts around the world.

Offered here is a VERY GOOD+ to NEAR FINE condition example of a Sharps-Borchardt Model 1878 Military Rifle. The gun bears the very desirable retailer mark of J.P. Lower of Denver on the top of the receiver the very man who asked Sharps to: “send no more of the hammerless guns.” The top of the receiver is clearly stamped in two lines: J.P. LOWER / DENVER, COL.. The top of the barrel is clearly marked with the script Old Reliable trademark behind the rear sight and closer to the receiver: SHARPS RIFLE CO. BRIDGEPORT, CONN. The left side of the receiver is marked in three lines: BORCHARDT PATENT / SHARPS RIFLE CO. BRIDGEPORT, CONN. / U.S.A. The serial number 16771 is stamped on the bottom of the receiver. The gun is in the standard military rifle configuration chambered in .45-70 with a round 32” barrel which is blued like the receiver. It has the standard military rifle ladder rear sight and the front sight / bayonet lug. It has a pair of sling swivels and the full-length forend is secured by a pair of screw-retained barrel bands. The typical bulbous headed cleaning rod is in place in the channel under the barrel as well. The usual checkered metal shotgun buttplate is in place on the straight gripped stock as well. The rifle retains about 60%+ of its original blue overall, with slightly more on the barrel than the receiver. The barrel shows some finish fading and loss which have developed a plum brown patina, mixed with scattered patches of light surface oxidation. The barrel is mostly smooth, with some patches of minor surface roughness and some scattered light to moderate pinpricking here and there. The bore of the rifle is in about FINE condition and is mostly bright with some lightly scattered pitting present. The receiver retains slightly less blue, and shows a large patch of moderate surface oxidation and light pitting on the right-hand side, roughly 1” wide x 1.5” tall. This appears to be the result of some poor storage. The left hand of the receiver remains mostly smooth with much more original blue and clear markings. Some minor pitting is present on the top of the receiver as well. The rifle remains mechanically functional and the action remains tight and crisp. The stock remains in about GOOD+ to NEAR VERY GOOD condition and shows the wear one would expect from a western used rifle from the late 1870s-early 1880s. Both the butt and forend remain solid and complete with breaks or repairs noted. The butt shows light to moderate wear with scattered bumps, dings and scuffs along with a couple of minor surface grain cracks. The forend shows slightly more wear, particularly in the area just in front of the rear band, where the rifle was likely carried across the pommel of a saddle. There are a couple of serious gouges and some wood loss in this area. Otherwise, the forend shows the same type of scattered wear found on the buttstock, just slightly more of it.

Overall this is a nice, solid example of a scarce Sharps-Borchardt Model 1878 Military Rifle in the most popular caliber with one of the most desirable of all the western retailer marks on its receiver. If it were not for the patch of pitting on the right side of the receiver and the wear in the forend, the gun would really rate at least fine, as it retains much more apparent finish than the 50%+ rating that I assigned it. This would be a great shooter (black powder only), as the bore remains in very nice condition and the action is known as one of the strongest ever produced. I have no doubt that you will enjoy adding this rifle to your collection of Sharps firearms, Old-West rifles and western retailer marked guns.