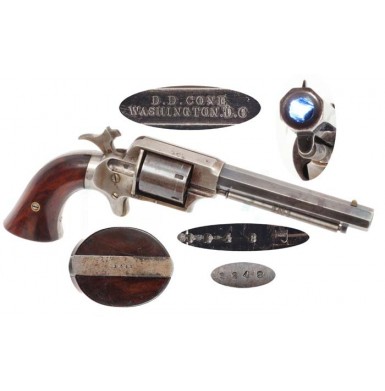 This is an outstanding example of a William Uhlinger .32 Rim Fire Pocket Revolver. William P. Uhlinger produced about 10,000 rimfire cartridge revolvers (two types in .22 caliber and one type in .32 caliber) in Philadelphia, PA between 1861 and 1865. He had purchased the tools and parts on hand of William Hankins, who had left his former gun making business behind to form a new venture with Sharps rifle inventor Christian Sharps, thus forming the firm of Sharps & Hankins. Since the guns that Uhlinger was producing were revolvers with bored through cylinders, he was in violation of the Rollin White Patent, which was held by Smith & Wesson. As a result Uhlinger produced the guns under a variety of trade names such as WL Grant, JP Lower and DD Cone in an attempt to conceal the identity of actual manufacturer, and avoid any legal troubles. About 50% of his pistols were also manufactured with no markings at all. He assumed this would help to avoid detection of his patent violations by Smith & Wesson, but it did not. He was eventually sued by Smith & Wesson for patent violations, and they won the case handily. The suit essentially put Uhlinger out of the gun business, and resulted in his gun being an interesting footnote in firearms history. In reality, his solid frame, single action cartridge revolvers were well made and relatively successful. In an era where the total production of some successful handguns was measured in hundreds of units (Allen & Wheelock is a perfect example of a successful maker with relatively low production of some models), his production totals that approached 10,000 units were a sign of their success and acceptance. There is no doubt that many a Union soldier went to war with a small frame Uhlinger .22rf pistol in his pocket for emergencies, and many line officers probably found the robust design of his solid frame .32rf pistol as a much sturdier choice for their personal defense than the Smith & Wesson #2 Old Army revolver.

The model offered here is one of Uhlinger’s D.D. CONE marked, .32 rimfire pistols (Flayderman 8A-184) with a 4 ““ octagonal barrel. The pistol is typical of the Uhlinger guns in that it is only marked with the trade name D.D. CONE / WASHINGTON D.C. on top of the barrel flat and with the serial number 3248. The marking die seems to have skipped on the barrel, as the "C" in "D.C." is double struck. The serial number is found externally on the bottom of the grip frame, under the barrel (hidden by the ejector rod), on the side of the cylinder and on the inner edge of the loading gate. It is also found stamped on the inside of the two-piece rosewood grips. Research indicates that D.D. Cone was a Washington, D.C. patent attorney, who had no involvement in the sale or marketing of the revolvers. It is possible that Cone represented Uhlinger in some way (either filing patents or possibly defending his patent infringement) and this is how his name was selected for use on the guns. The gun is in about EXCELLENT condition. The pistol retains about 85%+ of its original bright finish on the octagon barrel and about 50%+ original blue on the cylinder. The barrel is almost entirely smooth, with only some light scattered surface freckling present and a couple of small patches of lightly oxidized surface roughness on the right side of the barrel, likely from poor storage. The finish loss on the barrel is limited to high edge wear from handling and use. The bore of the revolver is in NEAR EXCELLENT condition and is bright and shiny with crisp rifling and only some light scattered peppering and minor frosting in the grooves. The cylinder shows some fading and thinning and the areas of lost finish have blended to a smooth, plum-brown patina, with some lightly oxidized surface freckling present as well. The cylinder is marked with the matching serial number 3248, as found throughout the balance of the revolver. The frame appears to have been case hardened, and has faded to a medium smoky gray color, with some traces of brown and blue coloring highlights. The frame is mostly smooth, with a small patch of light pitting on the top strap, and some small areas of lightly scattered pinpricking on the balance of the frame. The gun is mechanically excellent. It times and locks up perfectly and the action remains very crisp. The gun retains two parts that are often missing or broken on these revolvers. The loading gate is original, complete, is numbered to the gun and fully functional. The gates are very thin and they were built with a weak hinge, so they are often missing when the revolvers are encountered today. The other part that is often missing is the ejector rod. The rod has a stationary pin on one end and a spring-loaded pin on the other end. It snaps into place between the rod stop at the end of the barrel and the frame in front of the cylinder. The rod is present and functions exactly as it should, snapping securely into place under the barrel when not in use. The original dovetailed brass blade front sight is present at the end of the barrel as well. The edges of the octagon barrel remain sharp and the revolver is extremely crisp overall. The recessed and crowned muzzle is in VERY FINE condition as well, and shows only some light peppering from use. The two-piece rosewood grips are in EXCELLENT condition as well. They are extremely crisp and retain about 90%+ of their original varnish. The grips are numbered to the revolver and show no breaks, cracks or repairs. They show only the most minor dings and handling marks. The only issue worth noting is that the left grip has some traces of old scotch tape residue present. It appears that a label was taped to the gun many years ago. A careful cleaning with a mild solvent that will not hurt the varnish should remove this residue with minimal effort. The grips fit the frame very well, but do show some very minor gapping at the juncture at the rear of the frame.

Overall this is a really outstanding example of one of the lesser known cartridge revolvers of the mid-19th century. With only a few thousand produced, these guns are not regularly encountered and would fit in as well with a Smith & Wesson collection (as an example of an early patent infringement) or with any collection of the unique cartridge revolvers that were sold to the during the American Civil War. These guns are practically never encountered in this very high level of preservation; especially those less expensive “working man” guns that saw significant use and carry. This very crisp example will be very difficult to upgrade and will be a great addition to your Civil War revolver collection.