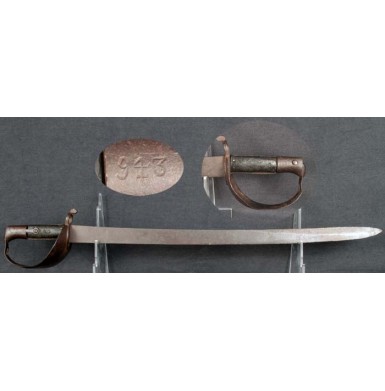 This is a very scarce example of a Confederate imported British P-1859 Type II Naval Rifle Cutlass Bayonet, for use on the Pattern 1858 “Enfield” Naval Rifle. These rifles had thicker barrels than the standard Pattern 1856 rifle and were rifled with 5 grooves instead of the normal 3 grooves. The British military wanted to create a dual-purpose bayonet for the rifle (much like Admiral Dahlgren did with his Bowie Knife/Bayonet for the US M-1861 Naval Rifle), and settled on a combination naval cutlass & bayonet as the most practical design. The length and weight of the bayonet must have made its use on the end of a rifle very awkward. In fact the bayonet had a massive 27 ““ long blade and an overall length of 33”, which was the same length as the barrel of the rifle that it was intended to be attached to! The British military contracted for about 80,000 of these cutlass bayonets, and it is interesting to note that aside from a small contract of less than 800 delivered by Reeves of Birmingham, all of the other contractors involved used Solingen made blades in the fabrication of their bayonets. In fact the British trade used so many Solingen blades during the 1850’s and 1860’s that a British Ordnance Department viewing room was established there to inspect the blades prior to shipping them to England. Once the Solingen blades arrived in England, the contractors who had the contracts to produce the bayonets would assemble, hilt and deliver them to the Ordnance Department. It is also interesting to note that the Ordnance Department reported a significant number of problems with the bayonets, usually associated with the quality of the blade. Large numbers of the British military used cutlass bayonets were returned to the Royal Small Arms Factory at Enfield Lock for repair and refurbishment during their service life. Even more were altered for use with the smaller bore Snider Naval Rifle from 1870-1871, making the unaltered, original bore sized bayonets something of a rarity. Even scarcer than original, unaltered British military cutlass bayonets, are those cutlass bayonets purchased and imported by the Confederacy during the American Civil War. Just under 10,000 Enfield “Short Rifles’ of all patterns were purchased by the Confederacy in 1861 and early 1862. These guns were marked with the JS-Anchor mark and had engraved inventory numbers on the buttplates of the brass mounted guns and stamped numbers in the belly of the stock of the iron mounted guns. Among those 10,000 rifles were some P-1858 Naval Rifles. Based upon extant invoices, it appears that those rifles were ordered with conventional saber bayonets, not cutlass bayonets. However, during the summer of 1861, Commander James D Bullock of the Confederate Navy placed a separate order for 1,000 Pattern 1858 Naval Rifles, complete with Cutlass Bayonets. These short rifles with their cutlass bayonets (and 1,000 rounds of ammunition for each gun) were noted to have arrived in the Confederate port city of Savannah, GA on November 14, 1861, aboard the blockade runner Fingal (some sources note the arrival as 17th, but Bullock himself notes the 14th). Researchers believe that these Confederate purchased Naval rifles and their accompanying bayonets were numbered in their own series from 1-1000. To date a total of 19 extant examples of Confederate marked and numbered P-1858 Naval Rifles are known, along with a total of 34 Confederate numbered cutlass bayonets. The highest known number for either the rifles or bayonets is 999, which is found on a cutlass bayonet. This provides relatively concrete proof that only 1,000 of the numbered naval rifles and bayonets were purchased and imported into the Confederacy, making them incredibly scarce today. All known examples of the Confederate purchased cutlass bayonets have blades that are either unmarked, or marked with Solingen maker names or logos.

The Confederate purchased and numbered Pattern 1859 Type II Naval Cutlass Bayonet offered here is in ATTIC CONDITION. All of the metal surfaces are a deep, dark chocolate patina that is totally untouched. The blade shows light to moderate pitting along its entire length, and the sheet metal basket guard shows some dents and dings form service. All of the metal surfaces also show some very light active oxidation. The muzzle ring of the bayonet is bent slightly forward from the original vertical position. The left pommel cap of the bayonet is clearly engraved with the Confederate inventory number 943. The original locking latch, spring and stud are present on the pommel cap of the bayonet and still function. The original two-piece pressed leather grip panels are present and are in about GOOD condition. They show significant shrinkage, which is typical of the leather grip panels. The grips retain traces of their original finish, with balance of the finish flaked off. The grips retain strong traces of their roll embossed knurling (while the pattern is “checkered” it is not actual checkering, but embossing with a roll die) and show significant wear from use and age.

Overall this is a wonderful, completely untouched, ATTIC condition example of one of the scarcest of all Confederate imported British bayonets. The bayonet is one of only 34 Confederate numbered P-1859 Type II Cutlass Bayonets known to have survived the 150 years since their original arrival in the Confederacy. While CS imported and numbered bayonets do appear for sale on the market from time to time, these cutlass bayonets are a true rarity. While this is hardly a minty example, it is a wonderful original Confederate cutlass bayonet and is an item that you may not see for sale again anytime in the near future. It is a must have for any Confederate naval collector, any collector of CS edged weapons, or any collector of CS purchased, inventory numbered rifles and muskets. Even many of the most advanced Confederate collections do not have one of these truly scarce bayonets in it.