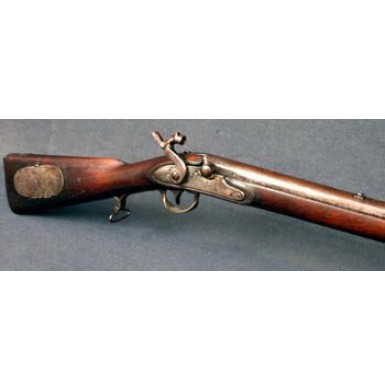 This is a wonderful example of what appears to be a Confederate altered US M-1817 Common Rifle. The rifle started life as a Nathan Starr second contract US flintlock rifle, and was converted to percussion via the Drum or French. method, and then altered to accept a socket bayonet as well. When originally produced, the Common Rifle was not equipped to accept a bayonet. The term Common Rifle actually dates to the period of use, and was meant to differentiate between this traditional muzzle loading rifle and the Hall’s Patent Breech Loading rifle produced at Harper’s Ferry and by Simeon North. The Common Rifle was only produced by contractors, and not at the National Armories. Henry Derringer was probably the most famous of the contractors, but the rifles were also produced by the firms of R&D Johnson and Nathan Starr. This gun was part of a second contract let to Starr in 1840 for 6,000 rifles.

This common rifle was produced in 1841, and that date is found on the rear of the lock plate as well as on the barrel tang. The gun is marked vertically in three lines behind the hammer: MIDDTN / CONN / 1841. Forward of the hammer it is marked N STARR & SONS in an arc over a sunburst motif with a five pointed star, over US. The breech is marked US / JCB / P , with the P in a sunken circle. The iron butt plate is marked US on the top of the tang, and two cartouches are located on the flat opposite the lock. The initials G M H are stamped into the cover of the iron patch box in the stock, and are stamped so that they are “upside down” when the rifle is handled in the normal way.

The rifle, as previously mentioned, was converted to percussion via the drum method, with a small circular “drum” shaped bolster inserted into the flintlock touchhole, and a percussion hammer added to replace the original flint hammer. The brass flash pan was removed, as was the frizzen and all external flintlock parts. The hammer is a typical civilian style rifle hammer. This type of conversion is associated with work by local gunsmiths and small southern arsenals, as nearly all of the rifles converted by the US government were converted by the Belgian or cone-in-barrel system. The first clue that this conversion may have been performed by a Southern arsenal is that all of the major components of the gun are marked with the Roman numeral XXI, crudely cut into the parts. This assembly number insured that all of the gun parts went back together with the right gun. Marking a gun in this fashion was unnecessary for a gunsmith performing a single conversion at a time. These markings are associated with larger scale conversions where a number of guns were altered at the same time. This assembly number is located on the backside of the hammer (only visible if the hammer is removed from the tumbler), so the mark is clearly not one from the initial assembly at Starr’s factory. The number is even found on the end of the ramrod, near the threads. The other clearly Confederate feature is that the front portion of the rifle barrel that extends beyond the fore end has been turned down to accept a standard .58 style socket bayonet, and a musket style front site / bayonet lug has been installed. A US M-1855/70 fits the barrel diameter perfectly, but the mortise cuts do not quite clear the stud. More than likely a locally produced socket bayonet, or an altered US one was used with the rifle during the war. In the early days of the Civil War many obsolete flintlock arms were in store in Southern state arsenals. Both local gunsmiths and small Southern armories & arsenals altered these flintlock guns to percussion. A typical feature found on many of those Southern converted guns is that the ones that were not originally designed to accept a bayonet were altered to accept either a socket or saber bayonet.

The gun is in nearly FINE overall. The lock functions well on both half cock and full cock positions and the responds to the trigger as it should. The metal is uniformly smooth with only some scattered light peppering and pinpricking. There is some light pitting around the bolster and lock area, as would be expected with a percussion rifle that was fired and used often. The iron barrel and furniture have a medium gray color with a nice smooth brown patina forming over all of the metal. The patina is smoother and more uniform in some areas and blotchier in others, but has a very attractive look with lots of eye appeal. The gun retains both of the original sling swivels, the original fixed rear site and the original brass tipped ramrod. The rod is full length, has fine threads and as previously noted is numbered to the gun with the same crude XXI file cuts found on the other primary components. The bore is about good and retains its original .54 caliber. The original rifling is present, with 7 deep, but narrow grooves present. The bore is evenly pitted throughout and somewhat dark, but the rifling remains quite strong. As also noted above, the front site is a period replacement that doubles as a bayonet lug for an angular socket bayonet. The stock is in Very Good to Fine condition, and is complete without breaks or repairs. It retains good sharp edges with only typical wear from use present. There are three minor grain cracks, each about ““ long, present in the stock. One is located at the rear lock plate screw and travels forward to the barrel channel, the result of a lock screw being over-tightened at some point. The other is present at the very rear of the lock mortise, again likely from a screw being over tensioned. The last is at the rear of the barrel tang. All follow the grain and are non-structural in terms of the overall strength of the stock. All are pictured below and are mentioned for exactness. The balance of the stock shows the normal bumps and dings from use and service. The only substantial ding worth mentioning is located on the left hand (non-display) side of the forend, between the middle and upper band. The smooth wear indicates that this ding is very old, more than likely from the time of use. Again, it is clearly pictured below. The stock has a wonderful, deep dark reddish brown hue that is really gorgeous and looks wonderful with the patina developing on the metal.

Overall this is a really great looking and complete percussion converted Common Rifle. The gun is completely period and 100% correct with all parts present and no replacements other than those from the time of conversion. The style of the percussion conversion, the crude Roman numeral numbering and the turned down barrel adapting the gun to accept a bayonet are all features that strongly indicate that this rifle was converted in the South for use by Southern soldiers. The gun clearly shows period use, but not abuse and was clearly cared for by the soldier that carried it. The initials on the patch box cover are another feature that tends to make the argument that the gun is Southern that much stronger. This is a just a great looking rifle that I am complete convinced is a Confederate conversion with a nice set of Rebel initials, and all for the price of a typical percussion conversion M-1817. This gun will look great in any collection and is one that any Civil War arms collector would be proud to own.