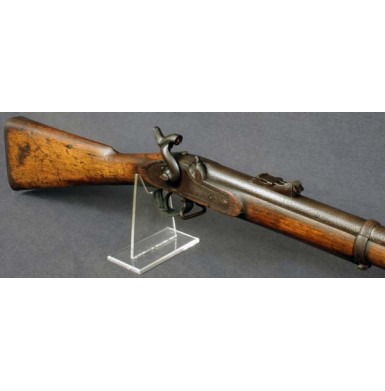 This is a wonderful, complete example of the least often encountered version of the Pattern 1853 Enfield Rifle Musket. The P-1853 was produced in four distinct variations, and the one offered here is the version that was produced in the smallest number, the 1st Variation or Type I. The Type I variant of the P-1853 Rifle Musket was produced in 1854 and early 1855, with only 22,500 ever manufactured. It is the original form of the P-1853 and was a groundbreaking advance in small arms for the British military. The P-1853 was the first small bore, rifled arm that was intended for general issue to all British infantry forces. The gun had a reduced bore of .577 caliber, and was rifled with three grooves with a slow 1 turn in 6” 6” rate of twist. The P-1853 was the first British military long arm to adopt barrel bands instead of pins or wedges to secure the barrel to the stock, and the first widely distributed long arm to adopt a fully adjustable, long-range rear site (the P-1851 featured an adjustable sight, but did not see the widespread issue of P-1853, and rifled & sighted P-1842 saw only limited use as well). It was also the first general issue arm that relied upon a locking ring to secure the socket bayonet, instead of some sort of spring retention system or friction. The Type I included a number of features that would not be found on subsequent P-1853 Enfield variations, and these unique features help to classify this rare weapon. The Type I rear site has bowed, convex sides to the rear site, and a ramrod channel that is almost totally enclosed with a very narrow channel. The ramrod was a swelled shank rod with a very small tulip head that was only retained as the standard rod for about 2 years before a new jag head rod was adopted. Subsequent versions also incorporated a much wider ramrod channel cut. The hammer of the Type I was also much thinner than subsequent versions, and incorporated a very pronounced curl at the end of the spur, reminiscent of the hammers found on the earlier P-1839, P-1842 and P-1851 series of British muskets.

When the Pattern 1853 was initially adopted, a total of 20,000 were ordered to be “set up” by the four old contractors in Birmingham. These “old”, Board of Ordnance contractors were the ones that the British military had most relied on over the past few decades. They included Thomas Turner, Hollis & Sheath, Swinburn & Son and Tipping & Lawden, each contractor was to set up 5,000 of the guns. The Board of Ordnance completely controlled the initial production of P-1853 rifle muskets, by order the components from a variety of Birmingham contractors, and having those components delivered to the above listed contractors for “Setting Up”, or final assembly. Barrels were ordered from 7 Birmingham contractors including John Clive, Henry Clive, Ezra Millward, William Millward, Beasley & Farmer, William Deakin & Sons and Henry Turner & Sons. Locks were ordered from 7 contractors as well, including Joseph Brazier & Son, R & W Aston and James Francis. Four contractors were to provide the rear sites, three contractors provided the rammers, seven provided the bayonets and R & W Aston was relied upon to provide all of the barrel bands about half of the small work (screws, etc). The additional 2,500 Type I P-1853’s were produced at the Royal Small Arms Factory at Enfield Lock. The Type I Pattern 1853 Enfield was the primary and preferred service long arm for the British Military at the opening of the Crimean War. The muskets saw significant and heavy service during that war and as a result, there are very few of these muskets still in existence.

The Pattern 1853 Enfield Rifle Musket, Type I offered here is a very rarely encountered example that is 100% complete and correct and is in about GOOD++ condition. The gun retains the original, convex sided rear site, as well as the original tulip head, swelled shank rammer that is full length and retains its threads. The lock is marked with the usual British military (CROWN) / VR to the rear of the hammer and TOWER / 1854 forward of the hammer, along with a small (CROWN) / (Broad Arrow) mark. The marks are somewhat difficult to photograph due to pitting in the lock area, but they are legible in decent light. The breech is marked with the standard British Military proof and view marks. The inside of the lock is marked by the contractor that manufactured it, Joseph Brazier, as well as the Birmingham viewer’s mark: (Crown) / B / 17 and the bottom of the barrel is marked with the barrel makers name, John Clive as well as the viewer’s mark (Crown) / B / 16. The inside of the barrel channel is marked with the viewer’s mark (Crown) / B / 4 and the toe of the stock, behind the triggerguard is double marked with the viewer’s mark: (Crown) / B / 2. The lock functions perfectly on all positions, and remains crisp and tight. The lock has a medium gray-brown patina and shows some light pitting and moderate peppering. The barrel has the same grayish-brown patina and is covered with even, light pitting, the result of the poor storage. The bore is in about fair condition with decent rifling present, but is dark, dirty and evenly pitted over its entire length. The brass furniture has a dark, untouched patina. The stock is in VERY GOOD condition with no breaks, cracks or repairs. The stock shows a significant number of bumps, dings and blemishes from hard use during the musket’s service life in the Crimea. Amazingly the very narrow rammer channel is free of significant wear or splintering. This narrow channel was one of the primary complaints that soldiers using the muskets in the Crimean had, as it would often bind the rammer, making it impossible to draw and use. The stock retains sharp edges and shows no signs of having been sanded, with the only area of excessive wear is a small area on the middle of the right side of the buttstock, where is appears the Ordnance Store Keepers mark has been removed. There are also a few "worm holes" from wood worms in the stock, near the muzzle, they are almost attractive and are in no way structural issues. There is a semi-legible mark on the stock flat, opposite the lock that may read HOLLIS, although it is not completely legible.

Overall this is wonderful, complete example of a very rare British military rifle musket. Very few of these guns are still in existence, as they were literally “used up” during the Crimean War. These muskets are very important as they were the first of the small bore British infantry arms, and were the initial production batch that started the entire family of P-1853 arms. Any serious 19th Century arms collector would be very proud to own this musket and for a Crimean War collector, a Type I P-1853 is a must to add to your collection.