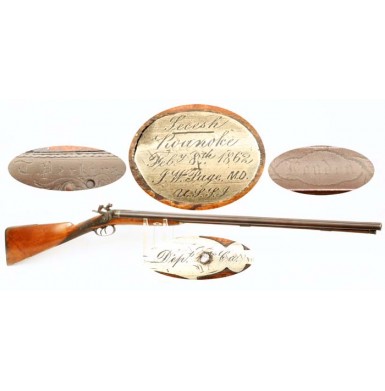 The double-barreled percussion shotgun was the quintessential American firearm during the mid-19th century. In the decades preceding the American Civil War it was probably the most common firearm in any American household, especially in the south. The advent of the percussion ignition system had made the manufacture of side-by-side double-barreled shotguns inexpensive, as opposed to double-barreled flintlock shotguns, which were very expensive. As a result, the single barrel, flintlock musket-fowler that had been commonplace in American homes from the turn of the 19th century through the1820s & 30s was soon superseded by an influx of these affordable large caliber smoothbore arms from England and Belgium. The shotgun was easy to manage and master and provided to quick shots without reloading, making it an effective small game and bird gun, as well as good defense against more dangerous creatures of either the four or two legged variety. The most expensive part of the gun were the barrels, and as a result American made shotgun barrels of the era are almost non-existent, as inexpensive, imported English and Belgian barrels could be had cheaper than they could be produced in America. The Birmingham and Liege proof houses inspected hundreds of thousands of shotgun barrels in the 30 years from 1840 to 1870, with a large proportion of those barrels ending up in America, primarily in British or Belgian made shotguns, but sometimes as barrels that were assembled into complete guns by American makers. Usually the only indication of use in the United States would be the addition of a retailers or importers mark on the barrels or locks. With the coming of the American Civil War, the preponderance of shotguns, primarily in the south, made it inevitable that many would see some form of military service. While few northern shotguns were likely to have left their owners homes destined for a distant battlefield, thousands of non-descript shotguns left their southern homes to fight for southern independence. Due to the extreme shortage of military arms in the south during the opening months of the war, local men were encouraged to bring what arms they could from their homes, and local newspapers ran stories and advertisements extolling the volunteers to bring what they could to battle the Yankee invaders, even shotguns. Accounts of early war southern regiments being armed almost entirely with shotguns are not uncommon, especially in places like Fort Donelson (TN) and serving in fortifications along the North Carolina coast. In some cases, as the war progressed these shotguns were modified from their original configurations with the addition of “military” features like bayonet lugs, shortened barrels, sling swivels or sling rings and the addition musket cap sized cones (nipples). While the shotgun seemed to see relatively brief service as a front line infantry weapon, it remained in service through the war in secondary and tertiary locations, coastal fortifications, among various home guard units, and most famously with the Confederate cavalry, who really loved a shortened shotgun for up close use on horseback. Today it is usually difficult to determine if lowly, imported double barreled percussion shotgun has a romantic southern history attached to it or not. The presence of a southern retailer mark certainly proves the gun was in the south during the antebellum era and increases the likelihood that it saw Confederate service. Military modifications like those listed above are a good indicator of Confederate use as well. However, the most definitive examples of southern used shotguns are those few guns that survive today with presentations on them, noting their capture from Confederate troops, and the battles from which they came. These are the most sought after and desirable of all the southern doubles and rarely appear on the market for the collector to obtain.

Offered here is one of those extremely rare and exceptionally desirable southern captured shotguns with a lovely period presentation engraved on a German silver escutcheon in the toe of the stock. The presentation reads in a lovely engraved script:

The gun was presented to US Sanitary Commission inspector Dr. Jesse William Page, in commemoration of the battle of Roanoke Island, February 7-8, 1862. Dr. Page was the medical official in charge of the Department of North Carolina, and he accompanied General Burnside’s expedition to North Carolina, subsequently establishing his headquarters in New Bern, from where he superintended and served as inspector for all US Sanitary Commission hospitals and services in that department. The German silver forend cap is additionally engraved in script Dept. Ca, for Department of the Carolinas.

The Confederate captured shotgun offered here is a classic example of an imported double-barreled percussion shotgun from the mid-19th century, typical of those sold all over the United States in the Antebellum era. The gun is just under 48 ““ in overall length, with 32 ““ barrels that measure a nominal .70 caliber. This equates to about 13 Bore (gauge), which is .710” and is equivalent to a modern 12 gauge with a “modified” choke. The bottom of the barrels are marked with Birmingham commercial proof marks, indicating that at least the barrels originated there. The back action locks are both engraved T PERKINS, and a scroll engraved portion of the barrel rib reads LONDON. This mark is most likely a marketing ploy rather than any indication that the gun was made or retailed in London. A review of the Birmingham and London directories of the era does not reveal any “T PERKINS’ working at the time when this gun would have been manufactured, so the mark is likely that of a retailer or even an exporter. The gun is of higher quality than the typical working man’s shotgun of the era, with a pair of platinum bands at eh barrel breeches and atop the barrel rib, and a second smaller set of bands at the rear of the rib. The back action locks are crudely scroll engraved and the retailer name is engraved in Old English script. The top of the barrel rib has a lightly engraved floral splay with the word LONDON inside of it. The walnut stock is expertly checkered at the wrist and is mounted with German silver accents. These include the forend cap, wedge escutcheons, cap box in toe of the stock and the inscribed presentation escutcheon in the toe line, between the end of the checkering and the cap box. The German silver mounts show light, crude engraving, typical of a better than average gun, but not one of the finest quality. The buttplate and triggerguard are iron, and are lightly engraved with simple, slightly crude floral motifs as well.

The gun remains in about VERY GOOD overall condition and appears to be original, complete and correct in every way. The locks both function correctly, but feel a little “spongy”, suggesting the springs are becoming a little weak. Both hammers appear to be original to the gun and have not been broken. The left cone (nipple) is battered and broken at the base, while the right cone remains in good condition. Both appear to be original to the gun. The gun has a lovely smooth plum-brown patina, with hints of the original faux “Damascus’ finish peaking through the patina. The portion of the barrels under the forend that have been protected from significant oxidation and air exposure still show much of the original wavy Damascus finish and are quite attractive. The barrel are mostly smooth, with some scattered pinpricking over their entire length and some light pitting around the breech and bolster areas. The bores of the barrels are both in about GOOD+ condition and are dark and dirty with scattered light pitting along their lengths, with some smaller patches of more serious oxidation present as well. A good scrubbing might improve the condition of the bores somewhat. The iron barrel rib is starting to separate from the barrels slightly, a common issue with 150+ year old double barrel shotguns, and the images below show the minor lifting of the rib nearest the breech and near the muzzles as well. The iron furniture shows the same deep, dark, even plum brown patina as the barrels as well as the same lightly scattered pinpricking and some minor pitting on the buttplate. The German silver accents have a slightly yellowed, lightly tarnished toned, but look to have been polished at some point in the last few decades. What appears to be the original ramrod is present as well. The rod is wood, with a brass rammer tip and an iron threaded reverse end for cleaning implements. The original iron worm is present on the threaded end, reversed from its position of use. The rod is full length and appears fully functional and structurally sound. The checkered stock is in about VERY GOOD condition and is solid and full-length with no breaks or repairs noted. A pair of minor, very tight, grain cracks emanating from the bottom of both lock mortises and travelling in irregular paths to the triggerguard plate. Neither of these appears to be serious or structural and they are not gapping at all, but it is mentioned for exactness, and they may have to be stabilized or reinforced some day. This is a notoriously weak area in double-barreled shotguns and many guns from this era show repairs in this weak region. The balance of the stock remains in very nice, solid, condition with moderate wear to the checkering but no signs of sanding. The stock shows a number of scattered bumps, dings, mars an impact marks, but nothing particularly notable for a 150+ year old, Confederate used shotgun.

Overall this is a really wonderful example of a rarely encountered, southern used and capture presented Confederate shotgun. Were it not for the presentation inscription, this gun would have remained anonymous and its history would not be known. It has a wonderful history, tied to the early war battles for the Carolina Coast, the early successes of General Burnside, and is a classic example of the poorly armed Confederate soldier trying to defend his home from Yankee invasion. The presentation to a very important doctor in the US Sanitary Commission is even more intriguing and there is the possibility that the study of Dr. Page’s papers (including his journal) might reveal the circumstances under which he received this unique memento of the Battle of Roanoke Island. This gun would be a wonderful centerpiece in a collection that centers on New Bern and the North Carolina Expedition, a collection of Confederate shotguns, a US Sanitary Commission collection, or even a collection of Civil War medical memorabilia. NO matter what you interests, this is one of those iconic relics that will certainly be a fantastic addition to the collection and will be a source of great pride for many years to come.