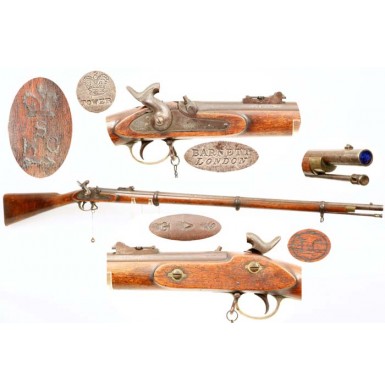 There is no English gun maker who could more appropriately be called the “Gun Maker to the Confederacy” than the London firm of John Edward Barnett & Sons. During the course of the American Civil War, Barnett delivered thousands of P-1853 “Enfield” rifle muskets, as well as P-1853 Artillery and P-1856 Cavalry carbines to the Confederacy. Barnett also delivered large numbers of obsolete arms like Brunswick rifles and P-1851 Mini” Rifles to Confederate buyers. Barnett not only filled Confederate central government contracts, but also filled orders for the Confederates states of Georgia, North Carolina, and South Carolina. The Barnett family traced their gunmaking heritage to Thomas Barnett who operated in London as early as 1796. In 1811 the firm became Thomas Barnett & Sons, and John Edward Barnett subsequently succeeded to the business in 1833. In 1842 the firm was renamed JE Barnett & Sons and operated under that name until 1901 when they became JE Barnett & Sons LTD, going out of business in 1908. During the Civil War years, the Barnetts operated at both their 134 Minories address, which had been established in 1833, and at Brewhouse Lane, Wapping, where they operated from 1860-1874. In the typical fashion of the old time gunmakers in England, Barnett relied heavily on a variety of contractors to produce piecework parts, which were subsequently assembled into complete arms in the Barnett shop. While Barnett could clearly manufacture entire guns in house (and often did), it was often more expedient and cost effective to sub-contract for major components when large contracts were received and had to be filled quickly. Many of the orders received from the Confederacy during the course of the American Civil War were just these types of orders, which had to be completed as quickly as possible. It is not uncommon to disassemble a P-1853 rifle musket with a Barnett marked lock, only to discover that the gun may have been assembled by Barnett, but that few (if any of the components) were actually produced by Barnett. These guns often bear Confederate viewers marks such as the small CH/1 in circle, a Sinclair, Hamilton & Company mark, or one of the lesser known Confederate inspection marks found on Barnet arms like a small script or block JS in a circle or a small SL in a circle. All of these marks are found on the comb of the stock, forward of the buttplate tang, and are approximately the same size. The CH/1 mark has been documented through the paper of Colin McRae as being that of inspectors Isaac Curtis & Charles Hughes, who inspected Confederate purchased arms for Barnett. It is logical to believe that these other marks are also Confederate inspection marks, with the “JS’ likely being John Southgate’s mark, and the “SL” being the initials of a yet to be identified Confederate inspector. On those arms delivered by Barnett to suppliers like Sinclair, Hamilton & Company, the inspection mark of Isaac Curtis is often encountered as a cartouche on the flat, opposite the lock. Even those Barnett arms devoid of documented Confederate inspection marks are often Confederate related arms. Barnett delivered a number of guns, presumably to the Confederacy, that were assembled by other makers, but are marked BARNETT / LONDON in the wood; either on the stock flat opposite the lock or along the toe of the stock. These were clearly guns purchased by Barnett to get a nearly finished order “out the door” as expeditiously as possible.

This Barnett P-1853 Enfield is marked with a crisp Sinclair, Hamilton & Company mark, a (CROWN) / S / HC / (ARROW) on the top of the stock comb, forward of the buttplate tang. The inspection cartouche of Isaac Curtis, a block I . C within an oval is present on the stock flat opposite the lock as well. This SHC marked Barnett contract P-1853 Rifle Musket is in about FINE condition and is extremely attractive. The gun is clearly marked on the lock BARNETT / LONDON forward of the hammer, and with a (CROWN) / TOWER to the rear of the hammer. While Barnett made arms do not bear dates on the locks, it has been my experience that the guns with the (CROWN) / TOWER mark to the rear of the hammer appear to be among the earliest of the Confederate purchases. The interior of the lock is marked PRITCHETT over the rear portion of the mainspring, suggesting that Pritchett probably made the lock. The interior of the lock is also marked I J, another probably a reference to setter up John Jagger (with the “I” being a throwback, archaic “J”), whose mark appears on a number of Confederate marked Barnett P-1853 rifle muskets. The lock assembly number 3 appears on the interior of the lock plate and inside the neck of the hammer. The top edge of the lock is marked with the assembly mating mark \ / |. The exterior of the barrel is marked at the breech with the three usual London commercial proofs: a Provisional Proof, a Definitive Proof and a Definitive View mark. The underside of the barrel is marked with usual mixture of initials, names and numbers. The numerical marks include the number 996, as well as a 25 gauge marks, indicating .577 caliber. The bottom of the barrel is additionally marked EZRA MILLWARD, A W, BARNETT and with the mating mark \ / |, which matches the mark on the upper edge of the lock. Ezra Millward was a very successful Birmingham based barrel maker working in the Aston Junction Mills, and his mark is regularly encountered on Enfields from the Civil War era. The initials “AW” are likely the mark of one of the workmen who made the barrel or possibly the rough stocker who mated the barrel channel of the stock and the barrel.

Overall the gun is in about FINE condition. The gun appears to be 100% original and correct in every way. The gun retains none of its original rust blued finish but has developed a lovely plum brown patina, with flecks of brownish surface oxidation shot through the patina, as well as some small patches of minor surface oxidation. The barrel bands have a very similar coloration and a smooth, matching patina. The metal is mostly smooth, with some lightly scattered areas of minor oxidized roughness over all of the iron surfaces, as well as some very light pinpricking, with more moderate pitting around the breech and bolster area from percussion cap flash. There are also some small, scattered impact marks on the barrel of the gun from use and handling during the period and possibly from subsequent storage. The bore of the gun is in about GOOD condition with visible rifling along its entire length, which is stronger near the breech than at the muzzle. The bore is mostly dark, heavily oxidized metal, and has moderate pitting scattered along its entire length, with some more significant patches of pitting present closer to the muzzle. The bore is dirty and crusty and need a good cleaning, which might improve the overall condition of the bore. The lock of the gun is mostly smooth metal with a mottled and oxidized plum brown over silvery gray patina that matches the balance of the gun wonderfully. The lock is excellent mechanically and functions well on all positions. The gun retains its complete original rear sight, and the bottom of the sight elevator is marked with the same \ / | mating mark that is found on the barrel, lock plate and the necks of the lock and breech tang screws. The original front sight/bayonet lug is present as well. The gun retains both sling swivels, and both appear to be original. The original full-length ramrod is in the channel under the barrel and retains good threads at the end. An original cone (nipple) protector is present, with its original iron split ring with a teardrop shaped brass chain. The leather pad is mostly missing from the iron protector and it appears that most of that leather pad is stuck in the recess of the hammer nose. The original screw retention “doughnuts’ are all missing from the barrel band tension screws, which is not uncommon. The upper barrel band screw has a seriously damage screw head and cannot be tightened or loosened with a screwdriver. This is really the only significant defect even worth mentioning on the musket. The brass furniture has a medium dark golden patina that is untouched and very attractive. The stock is in about VERY FINE condition and is extremely crisp and sharp. The wood to metal fit of the gun is wonderfully executed throughout. The stock is full-length, solid and free of any breaks or repairs. The stock retains extremely sharp lines throughout and exceptionally crisp edges, with absolutely no indication of having been sanded. There is some minor chipping of the wood around the lock mortise, the result of lock being improperly removed at some point in time. There is also a tiny, barely visible, surface grain crack to the rear of the lock plate. The rifle does show a number of minor bumps, dings and minor dents in the wood, as would be expected from a 150-year-old military musket, but the word really remains extremely crisp and sharp overall.

Overall, this is a really fantastic example of a Civil War era Barnett produced P-1853 Enfield Rifle Musket that bears a very fine and crisp Confederate Sinclair, Hamilton & Company mark, as well as the inspection mark of Isaac Curtis. The gun has outstanding of eye appeal, is tremendously crisper and sharper than most Enfields offered for sale and is simply a much higher-grade guns than is typically encountered these days. It was made by one of the most famous English gun makers to sell arms to the Confederacy, JE Barnett & Sons, and is really stunning in person. This is simply a wonderful gun that is very well marked and quite attractive. This Barnett Enfield will be fantastic addition to an advanced collection of American Civil War Confederate purchased Enfields.