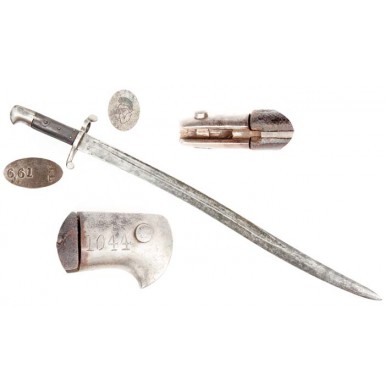 This is a scare example of a Confederate Imported British Pattern 1856 Type I Saber Bayonet. The bayonet has an engraved Confederate inventory number on the reverse of the pommel cap, forward of the latch release button. The number is 1044. These numbered saber bayonets were imported by the Confederacy for use with the early purchases of English Pattern 1856 Short Rifles, which are some of the less often encountered of the English long arms to be purchased by the Confederacy. Early production British military P-1856 rifles incorporated a saber bayonet lug with a short (about 1” long) guide or “lead” forward of the actual bayonet-mounting stud. This helped to guide the bayonet onto the lug and provided a minimal amount of stabilization. The extended lug was eliminated fairly early in production of the rifles, and by 1858 was no longer standard on military rifles. A newer, second variation of the bayonet was adopted without the short guide mortise and is sometimes referred to by collectors as the Pattern 1856/58 (or P-1856 Type II) Saber Bayonet. The other significant change that took place in 1858 was the elimination of a rivet to secure the locking spring to the bayonet, and replacing it with a screw. This allowed a broken spring to replaced in the field, rather the requiring the attention of armorers and machinery to drill out and replace the rivet when the spring was changed. The numbered bayonets and rifles were part of any early Confederate contract for 30,000 “Long Enfields” (rifle musket) and 10,000 “Short Enfield rifles. These were the guns that were marked with the well known Confederate JS / (ANCHOR) viewers mark, and were also marked with an engraved inventory number in the buttplate tang if they were brass mounted weapons, and a stamped inventory number in the wood behind the triggerguard in the case of iron mounted rifles. The rifle contract include all patterns of Enfield “short rifles’ in production at that time, including both iron and brass mounted P-1856 rifles, brass mounted P-1858 Naval Rifles, and P-1858 (P-1856 Type II) “Bar On Band” rifles, in both iron and brass mountings. This bayonet would have been imported with the P-1856 rifle with the matching inventory number, and with an extended guide on the bayonet lug. The process of marking the weapons with inventory (really accounting) numbers came to an end by the spring of 1862. As a result, we can be relatively sure that this bayonet was imported between the fall of 1861 and mid-1862 and was more than likely in the Confederacy prior to the battle of Shiloh in the West and the Peninsula Campaign in the East. In a collected database of Confederate numbered rifles, with over 20 years of data, only a handful these “Extended Lug” P-1856 “short rifle” numbers have been collected. To my knowledge, only about 15 CS marked and numbered iron mounted “Extended Lug” short Enfield rifles are known to exist today, and the majority are of the guns are relatively low numbers. In fact 10 of the 15 numbers are under 1,000 and only 5 are in 1,000 to low 4,000 ranges, distributed very spottily. The majority of the numbers are in the mid-250 to mid-600 range, with enough known examples to determine that at least three consecutive cases of 20 iron mounted short rifles (likely all with extended lugs) appear in the 261-320 range and two consecutive cases of similar rifles are in the 641-680 range. Deductive reasoning suggests that approximately 14 cases of 20 rifles arrived with at least some from each case containing guns with extended lugs. From extant examples, many of the guns with extended lugs were of “Volunteer” pattern, often with checkered stocks, high-grade wood and even hook breeches. These guns were intended for the British “Volunteer” market, a mid-19th century English movement that included elements of a reserve militia, a shooting club and a social organization. These guns were obviously purchased out of the existing stocks of various gun shops, as the Confederacy certainly would not have ordered the rifles with special features or expensive options. It is the belief of most researchers that these non-standard rifles, especially those in the first 2,000 or so, were delivered to the Confederacy by William Joshua Grazebrook. He was the first arms dealer to deliver short rifles to the Confederacy, supplying 7 cases (140 rifles) on May 1, 1861. In all Grazebrook would deliver a total of 2,295 of the 10,000 “short rifles’ acquired by the south, and many of these guns appear to have come directly out of gun shops, as Grazebrook’s own notes on the transactions would sometimes refer to the rifles as “best” (likely high grade “Volunteer rifles) or “second hand” (no doubt used guns).

This Confederate P-1856 “Extended Lug” Saber Bayonet has the hand engraved Confederate inventory number 1044 on the reverse of the pommel cap, and the mating number 661 stamped into the rear of the pommel cap, over the initials J.L. It is not clear if these initials represent an inspector or an individual cutler. The hilt is cut with the necessary relief to accept an “extended lug” bayonet stud with the guide bar. The reverse ricasso of the bayonet is marked with the crested knight’s head logo of Weyersberg, Kirschbaum & Cie (WKC) of Solingen, Prussia. The logo on this saber bayonet became the WKC trademark in 1854. All extant Confederate numbered P-1859 cutlass bayonets and many of the Confederate P-1856 and P-1856 (or P-1858) “Bar on Band” saber bayonets have Solingen makers marks on the blades. It was not uncommon for the Birmingham and London gun trades to rely heavily on the Solingen cutlers to provide bayonets when they were filling large gun orders. The bayonet is in NEAR FINE overall condition. The blade has a mottled dark gray to black patina over a dull pewter colored base. The blade is mostly smooth, with only some lightly scattered pinpricking and peppering present. The mottled discoloration is the result of age and minor surface oxidation that has colored the blade, but not caused any significant pitting. The blade is full length, with the exception of the very tiniest chip missing from the very point of the bayonet, likely the result of the bayonet being dropped point down on a hard surface, or possibly from hitting bone while being used in combat. The locking bayonet spring catch is in place on the obverse pommel cap, and if fully functional. Even though the hilt is cut for the extended bayonet lug, the spring catch is of the post-1858 design, and is secured by a screw, not a rivet. The pressed leather grip panels are in about VERY GOOD condition and retain the much of their original finish and the majority of their pressed checkered pattern. The grips do show use and wear commensurate with the age and condition of the bayonet and do exhibit some minor shrinkage (especially near the hilt) and some finish loss due to flaking. All of this is quite common, and the grips are prone to severe damage when exposed to harsh environment of constant campaigning in weather extremes. Water in particular is quite rough on these grip panels. The overall condition of the grips is actually better than many that are encountered for sale today.

Overall this is a very nice example of a scarce Confederate Numbered P-1856 Type I Extended Lug Saber Bayonet. Only 10,000 numbered saber bayonets of all patterns were imported by the Confederacy, and their survival rate is quite low. In fact, based upon the best currently available research (from a data base of Confederate import numbered rifles and bayonets that has been collected over 20 years) less than 50 of these numbered Confederate saber bayonets survive today. Of those, less than 10 examples of the “extended lug” pattern are known to exist. That means that only 1 out of about every 250 bayonets has survived to today! If you have a numbered Confederate Enfield short rifle with an extended bayonet lug, this is the ultimate accessory to go with it and will be a fantastic addition to your rifle or to any Confederate collection. I cannot overstate the rarity of these Confederate numbered bayonets, and it this is an item that you will be very glad that you added to your collection of Confederate arms.