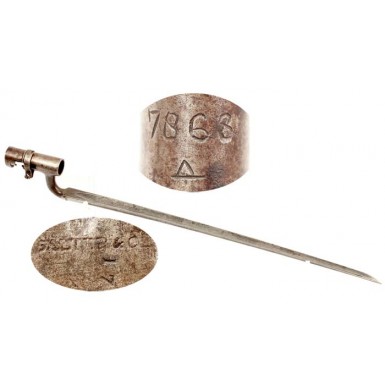 During the course of the American Civil War, the Confederacy imported hundreds of thousands British Pattern 1853 Enfield Rifle Muskets, with some estimates placing the total Confederate purchases between 300,000 and 400,000 guns. Each of these rifle muskets was ordered as a “stand of arms”, and as such a socket bayonet was included with each musket. This makes the Pattern 1853 Enfield socket bayonet one of the most commonly used by the average Confederate infantryman. Much like the guns themselves, it is often difficult to know for sure if a given socket bayonet was used during the American Civil War, let alone whether it saw US or CS use. While it is widely accepted and known that British military marks on either a gun or bayonet generally exempts that item from possible Civil War use, the lack of these markings is in no way guarantees it. Only a small percentage of Pattern 1853 Enfield rifle muskets were marked in any way that identifies them as being Confederate purchases. The most well known of these guns are the ones marked with the enigmatic J S / (ANCHOR), as well as an engraved inventory number on the upper tang of the brass butt plate, or a number stamped in the toe of the stock of the iron mounted rifles. The rifle muskets that were so numbered were shipped with a matching numbered ramrod, and a similarly engraved numbered socket bayonet. The rifles also had numbered rods, and mounted engraved number saber bayonets. One of the most knowledgeable researchers on Confederate imported arms has been assembling a database of Confederate numbered rifles and rifle muskets for over 25 years. During that time he has assembled a database of slightly more than 300 Confederate central government purchased numbered P-1853 Enfield rifle muskets. During that same time, he has assembled a list of less than 50 Confederate numbered socket bayonets! That means that Confederate marked English socket bayonets are about 7 times scarcer than the numbered Confederate long arms!

The Confederate imported P-1853 Enfield Socket Bayonet offered here is engraved with the Confederate inventory number 7868 / A on the socket. This number places it within the second of three groups of 10,000 numbered arms that were delivered to the Confederacy under the 2nd Sinclair, Hamilton & Company contract. The initial group was numbered from 1-10,000, and the two subsequent groups were numbered in the same way, with the suffix “A” added to the second 10,000 and “B” added to the third 10,000. As low B suffix numbered guns exist with provenance to the battle of Shiloh, it is likely that this bayonet (and its accompanying rifle musket) were part of the deliveries of arms to the Confederacy in early 1862. This means that this bayonet was more than likely in use by Confederacy in time to see service at the battle of Shiloh in the Western Theater, or the Peninsula Campaign in the Eastern Theater. The bayonet has a clear makers mark visible on the ricasso. It reads SALTER & CO. The firm of George Salter & Company was a well-established Birmingham contractor who had provided bayonets to the British Board of Ordnance, as well as the commercial trade from the beginning of the 19th century. The ricasso is also marked with number 17, the signifigance of which is not known.

The bayonet is in about VERY GOOD+ to NEAR FINE condition. The bayonet has mottled pewter gray and brown patina over all of its metal surfaces, mixed with moderate sized patches of lightly oxidized age discoloration and some very minor surface roughness. The metal of the bayonet shows some very lightly scattered pinpricking along the entire length of the steel blade. The iron socket has a more mottled plum brown patina over pewter gray metal, and shows some minor pinpricking and some very lightly scattered pitting. The bayonet is complete and full length, and retains a sharp tip, with no rounding to the point. The original locking ring and tension screw are present on the socket and still function smoothly. The bayonet has clearly seen use during its service life, and the relatively early inventory number confirms it was a bayonet that likely saw use during the majority of the war.