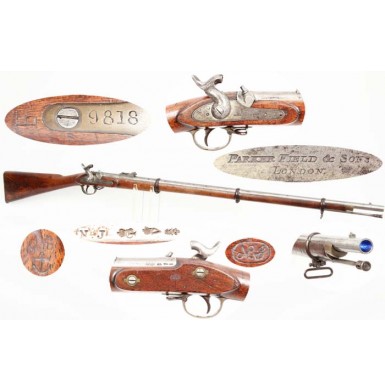 The P-1853 Enfield Rifle Musket offered here is a classic example of a Confederate marked and imported musket that clearly saw use in the field. The gun is doubly interesting, in that is also bears the ownership surcharge of the state of New Jersey in both the stock and the barrel. This indicates that the gun was captured in some way, and ended up in the possession of the state of New Jersey when they were marking their state inventory of arms. Whether the gun was captured on the battlefield or was acquired by the state at a Prize Court Auction after the capture of a blockade-runner will probably never be known. Only a very few Civil War Enfields are known with both US and CS marks on them, and this makes this gun particularly scarce and interesting. The gun is in about VERY GOOD+ to NEAR FINE condition and is crisply marked in the wood behind the trigger guard with the desirable J S / (ANCHOR) mark. The buttplate tang is engraved with the inventory number 9818, indicating that this gun was delivered at the end of the first group of 10,000 muskets to be delivered under the 2nd Sinclair, Hamilton & Company contract. Based upon a study of extant examples, their inventory numbers and the lock dates on the Birmingham made guns, this rifle musket was likely produced in early 1862. The gun bears a very crisp F furnishers mark, indicating that is was delivered by Parker, Field & Sons of London. The firm of Parker, Field & Sons (also known as Parker, Field & Company) was established as Field & Parker, goldsmiths & gunmakers at 233 High Holborn Street in London around 1792. William Parker took over the firm after Field’s death, and remained at the same location through 1841, with Field’s son John eventually joining the business. During that time the firm also maintained workshops and stores at several other London addresses. In about 1841 the company became known as Parker, Field & Sons, adding John Field (son in law to William Parker) and William Parker’s sons John William Parker Field and William Shakespeare Field to the business, with their sole occupation being gunmaking. The firm continued to use the High Holborn address through 1876, and as before operated additional workshop locations at a variety of London addresses over the next several decades. The firm ceased operations in 1886. During the Civil War, Parker, Field & Sons delivered thousands of P-1853 Enfield rifle muskets to the Confederacy, primarily through Sinclair, Hamilton & Company. They also delivered some of the Enfields for the state of Georgia, with at least 200 of the P-1856 Sergeant’s Fusils for India Service and 140 P-1853 Enfields being listed on the manifest showing Georgia purchased arms shipped on board the blockade runner Gladiator. A handful of revolvers are also known in the US with Parker, Field and Sons retailer marks, and potential Confederate provenance, but no contracts for the delivery of handguns to the Confederacy by Parker, Field & Sons are known.

Overall, this is a great looking example of a completely authentic Confederate imported and used Enfield Rifle Musket that surely saw field service, and eventually ended up in a New Jersey state arsenal. The gun has the most desirable and well known of Confederate import marks, a crisp and clear JS / (ANCHOR). It also has a wonderful engraved inventory number on the brass buttplate along with a crisp furnisher’s mark on the stock. This gun was clearly a very early arrival in the Confederacy that was likely on the field well before the beginning of the 1862 spring and summer campaign seasons. The pinpricking around the breech and light pitting within the bore clearly shows that this gun saw some service and fought for Southern independence (and possibly for Northern unity) during the course of the war. Somehow, through all of that use and potential for combat damage, the gun managed to survive in extremely nice and relatively complete original condition. With less than “ of the numbered Confederate Enfields being delivered by Parker, Field and Sons and with less than 1% of those 30,000 guns having survived to be in collections today, this is simply an incredibly scarce example of a Confederate purchased gun. If you have ever wanted to own a completely correct and honest Confederate used P-1853 Enfield Rifle Musket, that really saw service and fought the war, AND also bears US marks as well, this would be an outstanding addition to you collection. Only a very small handful of Enfields are known to bear both CS and US marks, and this makes this gun even more rare and important. This gun is really an iconic piece of history, which was no doubt a witness to some of the most horrific moments in the American Civil War. It is just as Confederate as any Richmond made rifle musket, and at a much more reasonable in price, and would be equally at home in a collection of US state marked arms as well!