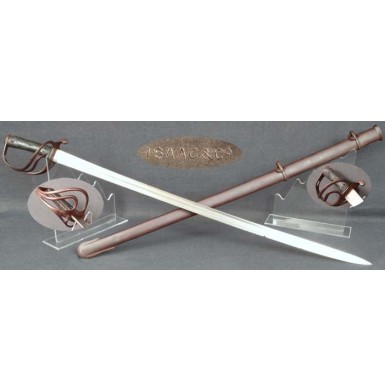 This is a very nice example of a Confederate Imported British Pattern 1853 Enlisted Dragoon Saber, often referred to by collectors as an Enfield Cavalry Saber. This pattern of saber was the standard saber used by British Enlisted cavalrymen and dragoons. It is believed that approximately 5,000 thousand of these sabers were imported into the Confederacy during the American Civil War. These numbers are based upon extrapolated numbers from existing blockade-runner manifests. It is possible that slightly more (or slightly less) were purchased. Some of the P-1853 Sabers were purchased by the Confederate Government central government, but some were also purchased by individual Confederate States, and others were likely purchased simply on speculation by arms dealers and blockade runners looking to make some fast money. The majority of the Confederate central government purchasesS. Isaac & Campbell of London. These sabers are simply stamped ISAAC & CO on the spine of the blade. This mark indicates that the sword was purchased by the Confederacy. The only marking that is more desirable than the ISAAC & Co mark, is the presence of a state of Georgia G ownership mark on the ricasso of the sword, as well as on the scabbard. The British utilized this pattern of saber until well after the Civil War era, and post-Civil War P-1853 sabers are often encountered on the market. While the pattern of the saber is unchanged, the post-war scabbards have shorter, rounder mounts for the hanger suspension rings, while the war time scabbards have taller, more pointed mounts for the rings. The sabers used by the British Military and their various colonial forces are typically well marked with acceptance marks and often unit marks as well. The sabers produced for export to the Confederacy were mostly unmarked (with the exceptions noted above), and never bear British military marks at all. Some of the sabers do bear a makers mark on the spine of the blade, like the mark of Robert Mole of Birmingham, but marked sabers are certainly the exception and not the rule for Civil War imports. While the saber was generally considered an obsolete cavalry weapon by the middle of the Civil War, the Confederacy did continue to buy them and import them, right up to the end. According the records maintained by Captain John M Payne of the CS Ordnance Bureau, between July 17, 1863 and January 12, 1865, 34 cases of cavalry swords/sabers were imported into the port of Wilmington, NC. This is just a small snapshot of imported sabers that entered the Confederacy through a single port during 18 months of fighting, at a time when fewer and fewer blockade runners were making it to Confederate ports without being captured.

The Confederate Imported, British Pattern 1853 Enlisted Dragoon Saber offered here is in about VERY GOOD+ condition overall. The saber is full length and retains its original scabbard. The spine of the blade is clearly marked with the desirable ISAAC & Co mark. The blade retains about 50%+ of its original polish, and has been lightly cleaned to leave almost the entire blade bright. The blade shows only some very small, scattered patches of minor age discoloration and light oxidation. The edge of the blade does show a couple of nicks from use and combat, with one fairly prominent and the other less noticeable. They are well pictured below. The throat washer at the blade to guard juncture is missing, and has been gone for a very long time. The iron guard and mounts show a thick brown patina over all of their surfaces. The pressed leather grip panels are in about GOOD condition and show the typical shrinkage that is often encountered with the leather panels. They grips show moderate wear and significant scuffing, as well as a few minor gouges. Due to their fragile nature, and the tendency for leather to deteriorate over time, the leather grips are typically encountered in rough condition. The scabbard is in VERY GOOD good condition overall. It is the correct, Civil War era pattern, with the tall, pointed suspension ring mounts. The original throat is in place as well. The sheet iron scabbard shows an even, smooth brown patina over its entire surface, with some patches of darker and slightly rougher oxidation present as well. The scabbard does have a number of dents along its length. It also shows a significant number of small dings and impressions near the drag, that appear to be the result of a blast of shotgun pellets or possibly shrapnel from an exploding shell.

Overall this is a much better condition example of a Confederate Imported Pattern 1853 Enlisted Dragoon Saber than is normally encountered on the market today. The saber has a very attractive blade that is quite brilliant, and bears a wonderfully deep and crisp ISAAC & Co mark. These sabers have been getting scarcer on the market over the past few years, as the appreciation for their southern use and association has increased. In fact, unmarked specimens are now bringing much higher prices than only a few years ago. Confederate import marked examples are difficult to find for sale these days. This is a great example of a Confederate imported sword that shows real use in the field and carries a couple of nice battle scars, but still looks fantastic and displays wonderfully. If you collection Civil War imported arms, English arms or simply like all things Pattern 1853, this saber will be a nice accompaniment to your P-1853 Enfield Rifle musket or any other Enfield pattern arms of the mid-19th Century. It also represents one of the best values in Confederate cavalry sabers on the market today, and is every bit as appropriate in any CS edged weapons collection as those swords made by Boyle & Gamble, Leech & Rigdon or any of the other prominent Confederate sword makers.