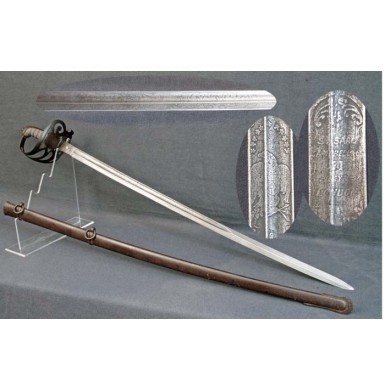 This is a very nice, "as found" and "untouched" example of a rarely encountered Confederate Officer’s Sword, imported from the famous military goods supplier to the Confederacy, S. Isaacs, Campbell & Company. The sword is iron hilted and would officially be referred to by the British as a Pattern 1827/45 Officer of Rifle Regiments Sword. The "/45" in the designation indicates that the sword was manufactured with the post-1845 pattern blade. What makes this sword special is that instead of being a standard British sword with the usual Rifle Regiment etching and adornments, this sword has a blade etched with Confederate motifs and a guard with Confederate decoration as well.

In most respects the P-1827/45 swords differed little from the standard British Pattern 1822 Officer's sword. However, the pattern dispensed with the folding guard feature of the 1822 and used iron for the hilt and guard instead of brass. Due to problems with the breakage of blades, a more robust blade design was officially adopted in 1845. The blade design was pioneered by Wilkinson during the early 1840’s and was significantly stronger than the original P-1822 pipe-back design. By the mid-1840’s the folding guard was no longer a common feature (again due to breakage) and stronger guards became standard. The iron mounted P-1827 became the standard officer's sword of the Volunteer Rifle regiments, and many of these swords were provided through military goods dealers like S. Isaac, Campbell & Co to officer's of the British Volunteer regiments. Like many retailers, S. Isaac, Campbell & Co relied on Solingen based cutlers to provide the majority of their edged weapons. The P-1827/45 swords were nominally 38" in overall length, with 32" spear point blades with a single fuller. Minor variations in dimensions have been noted on those swords that were sold commericially, and not to the British military. The sword was paired with a simple sheet iron scabbard, devoid of adornment; with two iron carrying rings and mounts.

This pattern of sword was popular with Confederate officers. A number of P-1827/45 swords have been noted in period photographs, indicating that they were purchased in some quantity. However, it is not clear how many of them may have featured Confederate blade etching and embellishments. The identified image of Captain William H Murray of Co A, 1st Maryland Battalion of Infantry clearly shows the hilt of an English P-1827/45 sword. Captain Murray is also wearing an English sword belt with "snake buckle" in the image. Lt. Lawrence Anderson of Co. A 1st Florida Infantry also sat for his image with an English P-1827/45 sword and can be seen wearing an English "snake buckle" belt as well. His sword is a standard rifle regiment sword, without any Confederate embellishments, and it resides in the collection of the Museum of Florida History in Tallahassee. Lt. Anderson was killed on April 6, 1862 at Shiloh. These are but two easily documented examples of known Confederate officer’s posing with the P-1827/45 sword. Further proof of the purchase of these swords by the Confederacy comes from an invoice in the McRae papers, which clearly refers to the purchase of “officer’s swords”. The invoice is from S. Isaac, Campbell & Company, and it lists "59 Officers Swords @ 19/6" and "1 Case @ 10/6". The officer's sword were billed at 19 schillings, 6 pence and according to the invoice, the case was to be marked OS/59 in a rhomboid. This indicated "Officer's Swords / 59 total". Unfortunately the invoice is not dated, but due to the number of swords of this pattern found in early war images, I believe the invoice was from the late fall of 1861 or the very beginning of 1862.

While some of the swords purchased featured the standard British decoration (like Lt. Anderson’s sword), at least a few others were embellished with special Confederate decorations. This example has a Confederate themed etched blade. The sword has 11" etched panels on both sides of the blade. The etching shows foliate splays on both ends, with an eagle, head turned to the left, in the center. The eagle has a shield within his breast, which is engraved C S A, and is surmounted by 11 stars, representing the 11 Confederate states. Another variation of this same blade etching is known with a raised "CSA" in the shield, instead of an engraved one. The other Confederate "upgrade" on this sword is found in the iron guard. The standard rifle regiment officer's sword had the royal crown surmounting a strung bugle (the device for riflemen) within the iron guard. On this example, and a handful of other known examples, the rifleman's device has been skillfully removed from the guard and has been replaced with a convex iron oval disc with an engraved eagle, surmounted by 11 stars, and the letters C S A engraved upon its breast. This is the same pattern of CS eagle present in the etched designs on the blade. Halfman & Taylor of Montgomery, AL are known to have imported this exact variant of officer's sword with the obverse ricasso etched with their name and address, instead of the S. Isaac & Campbell name and address. The reverse ricasso of this sword is etched in five lines: S. ISAAC / CAMPELL & Co / 71 / JERMYN St / LONDON. The obverse ricasso is etched with a 6-pointed star surrounding a brass disc within the ricasso, which is marked PROVED. Like so many of the swords and saber bayonets imported by the Confederacy through S. Isaac, Campbell & Company, this sword is of Solingen origin.

The sword is in VERY GOOD+ condition, and remains untouched, with a matching thick brown patina on the hilt, guard and scabbard. The 32" blade is a dull dove gray color, and most of the etching remains visible, although it is no longer vibrant. Skillful cleaning by an expert in sword restoration might bring some of the shine and polish back to the blade. The blade shows darker "salt & pepper" age discoloration along its entire length. As noted, the blade has an 11" etched panel on either side, resplendent with a spread-winged eagle, with a shield and C S A upon his breast. The etching is contained within the confines of the 19" fuller. The blade is free of any real pitting, but does show light scattered patches of minor pinpricking over its length. The edge of the blade is free of any nicks or dings, and appears to retain the original factory edge. The iron guard and hilt have a thick, brown patina, which is completely untouched and uncleaned. The oval iron disc with the Confederate eagle, which is set into the guard where the Rifleman's device would be on a British sword, is in fine condition and the engraving remains crisp and clear. The blade to hilt juncture remains tight and secure and the original buff leather throat washer remains in place at the base of the blade. The shangreen covered grip remains in VERY GOOD+ condition, and shows the expected light wear from carry and use. The majority of the wear is along the high edges where the sword would be gripped. The hilt retains about 90%+ of this original wrap. The 8 grooves of the hilt are further embellished with three-strand wire wrap, which features 2 plain wire strands on either side of a wound wire. All of the wire is present and in tact, with only the most minor hint of looseness on a couple of strands. The sword is contained within its original simple iron scabbard. The scabbard has the same thick brown and totally untouched patina as the hilt. The sword fits the scabbard perfectly. The scabbard retains both of the original iron suspension rings. The metal is mostly smooth, with scattered light surface oxidation and some patches minor roughness scattered over the entire scabbard body. The scabbard shows on a single small dent, on the obverse between the suspension rings.

Overall this is a really lovely example of a very scarce and very special Confederate officer's sword. It is unclear how many of these specially enhanced swords may have been imported, but it must not have been many, as their survival rate today is very low. To date, only a handful of these swords have been noted and documented. What is especially nice about this one is that it shows clear indications of having seen use in the field, on the sword belt of a Confederate officer. Thankfully the sword was never abused, and remains in a wonderful state of preservation since it was carried in the field 150 years ago. The last time I saw one of these swords offered for sale was at the Baltimore Show earlier this year. That sword was priced around $16,000. I know of at least one Internet offering that recently had this pattern of sword at just under $15,000. These prices underline the scarcity of these swords and their desirability in an advanced Confederate edged weapons collection. This sword comes from one of the most advanced Confederate import collections in the country, and will be a fantastic addition to your collection. Whether you concentrate on collecting Confederate blades or Confederate imported weapons, this is a rare opportunity to add a very scarce CS sword to your collection.