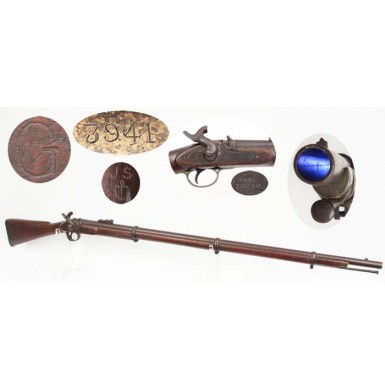 While Confederate marked and imported P-1853 Enfield rifle muskets are very scarce and always desirable collectibles, the rarest and most desirable of these guns are the ones purchased by individual southern states and marked with their state ownership marks. It is well known that early in the war the states of Georgia, South Carolina, North Carolina and Louisiana all acquired arms directly from England, functioning proactively to supply their troops that were rallying to the protect their states from Northern invasion. These guns had state ownership marks applied to them prior to their shipment to the Confederacy, in an attempt to keep the guns segregated from Confederate central government purchases, and to insure that the guns reached the troops of that specific state. The guns purchased by the state of Georgia are rarely encountered for sale, but they are some of the best documented of the Confederate state purchased arms.

In 1861, Major Edward C Anderson was sent to England to act as a Confederate central government purchasing agent of small arms and munitions. As Anderson was a Georgian, Georgia Governor Joseph E Brown relied upon Anderson to work as a purchasing agent for that state as well. During September of 1861 Anderson arranged the purchase of 5,500 “Enfield” pattern small arms through the firm of Sinclair, Hamilton & Company. Of these guns, 4,700 were P-1853 “long” Enfields, and 800 were P-1856 “short” Enfields, which were apparently Sergeant’s Fusils for India Service rifles. Anderson returned to the Confederacy aboard the Confederate Blockade Runner Fingal on October 8, 1861. In addition to Anderson, the Fingal brought the first 1,100 guns of his purchase for the state of Georgia, as well as 1,000 that had been purchased by Louisiana and 7,520 that had been purchased by the Confederate central government. Among these guns that were on Fingal were the Georgia purchased “long” Enfield’s with the engraved numbers 1-1000. These guns were shipped in crates of 20, complete with socket bayonets for each gun, a bullet mold and two nipple keys (cone wrenches). Based upon an analysis of the Gladiator cargo manifest it is probable that Fingal also carried the Georgia purchased “long” Enfield’s numbered 1121-1220. The crates that contained these Georgia purchased arms were marked with the initials (for Governor Joseph E Brown) in a rhomboid over the letter G and were numbered. To date only 6 of the Fingal delivered “Georgia G” marked guns are known to have survived. The Fingal arrived in Savannah, GA on November 13, 1861, after a brief stop in Bermuda. The next shipment of Georgia purchased arms left England on the Blockade Runner Gladiator on November 6, 1861. The bill of lading for the Gladiator is in the archives of the Museum of the Confederacy, and it lists 900 “long” and 580 “short” Enfields. The long Enfields were numbers 1001-1120 (cases 51-56), 1221-1300 (cases 62-65), 1301-1960 (cases 78-110), 1961-1980 (case 123) and 1981-2000 (case129). The other cases (66-77, 111-122, and 124-128) contained the “short” Enfield Sergeant’s Fusils for India Service, numbers 1-580. These guns were all marked with the JS / (ANCHOR) inspection mark in the wood behind the triggerguard tang, in the belly of the stock, and have engraved Confederate inventory numbers on the tang of their brass buttplates. The guns are additionally marked with a 5/8” tall capital letter G on the obverse buttstock. The Gladiator arrived in Nassau, Bahamas on December 9, 1861. There she was unloaded and her cargo was transshipped to the Confederacy via the smaller, faster Blockade Runners Cecile, Kate and Florida. The Kate delivered her cargo to Smyrna in early February of 1862, Florida made her delivery to the same destination in mid March, and Cecile delivered her cargo into Charleston in mid-February 1862. To date, only 16 of the 900 Georgia marked “Gladiator Enfields” are known to have survived. The balance of the Georgia purchased arms were shipped aboard the Blockade Runners Bermuda (1,000 arms) and Economist (the final 1,920 arms). Economist made its delivery into Charleston Harbor in mid March 1862.

Based upon examination of the limited number of Georgia “G” marked P-1853 Enfield rifle muskets known to exist, it has been determined that the guns numbered 1-2000 and 3700-4700 were guns marked in the above manner. However, it appears that approximately 1700 guns (likely the guns numbered between 2000-3700) were delivered by the London gunmaker Barnett, and these guns have their numbers stamped on the toe of the buttplate, rather than being engraved on the buttplate tang. These guns also bear a G mark on the obverse buttstock (but of a slightly larger size), and are marked with the CH / 1 inspection stamp in the wood, in front of the buttplate tang, instead of a JS/(ANCHOR). To date less than 50 “G” marked P-1853 Enfields of all types are known to have survived, with less than 30 of the engraved number guns being known and less than 20 of the Barnett guns with stamped numbers being known. This observation is based upon some 25 years of surveying extant examples by several noted arms historians, who have maintaining a very extensive and detailed database of Confederate imported Enfields with engraved numbers.

This Economist transported Georgia “G” P-1853 Enfield Rifle Musket is number 3941, and was delivered into Charleston Harbor on March 14, 1862. The Economist was owned by Confederate financiers and importers Fraser, Trenholm & Company, and its extensive cargo included some “40,000 Enfield rifles”. The gun was manufactured by the Birmingham gunmaking firm of King & Phillips. The firm was established in 1859 as “gun, pistol & rifle manufacturers” and was located at 96 Bath Street. They went out of business in 1864, quite possibly an economic casualty of the foundering Confederate economy. The gun is clearly marked on the lock in two lines, forward of the hammer: TOWER / 1861 and with a “crown” to the rear of the hammer. The interior of the lock marked with the mating mark | | and the initials K&P over the mainspring. The breech of the barrel is marked with the usual Birmingham commercial Provisional Proof, View, and Definitive Proof marks, interspersed with a pair of 25 gauge marks for .577 caliber. The bottom of the barrel is marked by the barrel maker J.R. Cooper, and is additionally marked both KING & PHILLIPS and K & P. The bottom of the barrel bears the mating number 2 on the lower breech and the breech plug. This mates with the Roman numeral | | found in the lock, in the stock and on the necks of the lock mounting and breech tang screws. The bottom of the barrel also bears the mark H 22 and a matching 22 is present on the bottom of the rear sight leaf. The gun has a crisp and clear 5/8” tall Georgia G on the obverse buttstock, and a very crisp and legible JS / (ANCHOR) is present in the belly of the stock, behind the triggerguard. The name of the master contractor that assembled the gun, KING & PHILLIPS is very lightly struck in the belly of the stock along the toe line, but is barely visible. The inventory number 3941 is engraved on the brass buttplate tang. The number is engraved in a very neat hand. An indistinct mark is present in the wood forward of the buttplate tang, in the location where a furnisher’s initial would normally be encountered. The mark does not appear to be any of the five known furnisher initials B (Bond), F (Parker, Field & Son), J (CW James), K (James Kerr, S (W & C Scott & Son). As the gun was manufactured in Birmingham and likely delivered by a Birmingham furnisher, it would make sense that the mark would be a J for James or an S for Scott, as the other furnishers were all London based. The mark appears to be a circular letter, similar in size to the usual furnisher mark. However, it appears to be either a G or possibly a Q. Unfortunately, it simply not clear enough to be sure.

The gun is in about NEAR VERY GOOD attic condition overall. The metal of the gun is untouched and has a lovely plum brown patina. The metal is relatively smooth forward of the rear sight, while the breech area shows some minor roughness and scattered light flash pitting. The barrel has some scattered patches of minor surface oxidation, as well as some light scattered peppering and pinpricking along its length. The lock has a similar plum brown patina, with some traces of dark blue or purple case coloring present. The lock is mostly smooth, with scattered patches of light surface oxidation as well as some scattered peppering and pinpricking. The lock functions crisply and is mechanically excellent, working perfectly on all positions. The bore of the gun rates about VERY GOOD as well. The bore is dark, but shows strong rifling and only light scattered pitting along its length. The rifling in the last 1”-2” of the bore nearest the muzzle is very weak, due to the gun being loaded hundreds (if not thousands) of times. The gun retains the original long-range rear sight, which appears to have been reattached to the barrel at some point in time. As the mating number under the sight leaf matches the number under the barrel, I am confident that the sight is original to the gun. The lower and middle barrel bands retain their original screw keepers at the ends, small items that are almost always missing. The upper band is missing its screw keeper. The gun is missing both of its original sling swivels, which is not uncommon on Confederate arms found today. The original ramrod, which was numbered to the gun, is lost to the ages. However, the gun does have a full-length, period replacement ramrod. The iron button head rod is typical of southern made replacement rods often encountered on Confederate long arms. The rod does not have any threads at the end. The brass furniture is very attractive and has a lovely, deep golden mustard patina. The stock of the gun rates about NEAR VERY GOOD as well. The stock does not appear to have ever been sanded. All of the stock markings remain crisp (with the exception of the King & Phillips mark), without any smearing or blurring. The edges remain strong, and any rounding appears to be from actual use, wear and tear. The stock is solid and full-length, with no breaks or repairs. The wood to metal fit is wonderful, and very tight throughout. The stock does show a significant number of handling marks, bumps, dings, rubs and small gouges, all of which were likely received while the gun was in Confederate service. There is some minor wood loss behind the bolster, which is the result of percussion cap burn out. This is all real world wear and tear that only adds to the untouched appearance of this Confederate used Enfield.

Overall, this is a really great example of a very scarce Georgia “G” marked P-1853 Enfield Rifle Musket, which we know was shipped from England on board the Economist. These early Georgia marked guns were some of the first Enfields to arrive in the south, and their early delivery insured that they saw significant service during the course of the war. High quality, original and untouched Confederate Enfields are difficult to find for sale, but state marked guns are particularly difficult to locate. This is a wonderful and well marked Georgia gun that is 100% original and correct (with the exception of the missing original numbered rod and sling swivels) and would certainly make a fantastic centerpiece to any advanced collection of Confederate long arms, especially a collection that emphasizes Confederate imports. This gun was just recently discovered in a very old collection of Civil War arms from Athens, GA, and to my knowledge has not been on the market in many decades. Finding a fresh, previously unknown, numbered Georgia “G” Enfield is very exciting, and I’m sure you will be equally excited to add this gun to your collection.