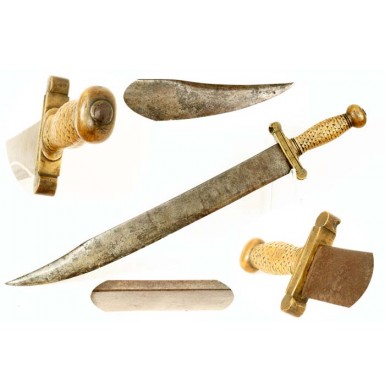 This example of a scarce and desirable Tennessee Fighting Knife is attributed to Thomas Leech & Company of Memphis, Tennessee. The knife was formerly in the renowned Bowie knife collection of Bill Adams, author of The Antique Bowie Knife Book. This wonderful knife is also pictured and described on page 123 of Confederate Bowie Knives by Josh Phillips, Jack Melton & John Sexton. Thomas Leech was a pre-war cotton broker in Memphis who also handled shipping and trade of commodities both across the United States and internationally. With the coming of the Civil War he established the Memphis Novelty Works to manufacture a wide variety of edged weapons and cast brass military equipment and parts. A September 18, 1861 advertisement in the Memphis Daily Appeal not only listed Infantry Swords, Cavalry Swords and Sabers, Artillery Cutlasses and Knives but also listed two items that for the most part were uniquely southern weapons during the American Civil War, Bayonets for Shot Guns and in very large, capitalized and italicized print: BOWIE KNIVES. Within a year Leech had established a second Memphis Novelty Works facility in Columbus, MS as his primary manufactory and had made his foreman, machinist Charles Rigdon a partner, thus creating the famous Confederate Leech & Rigdon manufactory. However, by the summer of 1862 the exigencies of the war forced the company to concentrate on more viable weapons than bowies knives, like sabers and their Leech & Rigdon revolvers.

This knife is one of those unique and enigmatic Confederate assemblages that combine a cast brass hilt based upon the US M-1832 Foot Artillery Saber with a massive clip-point bowie knife blade. Phillips postulates that surplus (or possibly “defective”) artillery sword hilts were mated to knife blades to make use of the available parts. As he notes, it is clear that these knives were made out of artillery sword, but rather the hilts from the swords were mated with purpose made knife blades. A wonderful maker marked Memphis knife of the same type by F.M. Moore is also pictured in the book, and it has a similar blade (which is Moore marked), and is mated to another Thomas Leech & Company, Memphis Novelty short artillery sword hilt. This great southern fighting knife is just shy of two feet long, measuring 23 ““ overall with a 18 5/16” long blade, that is 2” wide at the ricasso and has a spine that is 3/10” wide for much of its length! The hollow brass sandcast hilt measures 5 7/16” in length, and has a guard that is 3 15/16” wide. The blade has a wicked 5” long clip point, and its “false edge” has been sharpened in the tradition of the original Bowie Knife to make it a wicked hook that can slash up on down upon an adversary with lethal effectiveness. Phillips notes in his description of the knife that the last 10” of the blade conform to the dimensions of known Memphis Novelty Works clip point Bowie knives. The blade has a number of nicks along its cutting edge, but still remains relatively sharp and does not have that dull edge of a typical Civil War era Federal cavalry saber. The blade has a medium dark gray patina with brown overtones. The blade shows scattered areas of darker oxidized discoloration and age staining as well. The blade is relatively smooth, some scattered areas of light to moderate pitting, scattered pinpricking and some areas of minor oxidized etching, primarily near the cutting edge close to the tip. The hilt shows the expected rough casting flaws and sandcast texture that would be expected and shows some tool marks from hand finishing as well. Phillips postulates that the Memphis Novelty Works supplied the cast grip as well. Interestingly the faces of both round quillons were filed flat for some reason, but not polished, as file marks remain visible on them. The reverse of the upper quillon shows a major casting flaw that has resulted in a section of brass breaking out of the quillon. This flaw may be why the hilt was set aside and not made into an artillery sword (which would have been a CS military contract piece), but was considered suitable for use as a knife hilt, as that would most likely have been a privately purchased item. The pommel cap shows a crude, but effective, peen that is undisturbed and that has a wonderfully untouched chocolate patina. The overall condition of the knife is about VERY GOOD and the knife has a wonderfully unmolested look, exactly the way you want to find them.

Overall this is simply a great example of a large and impressive Confederate fighting knife made in Memphis, TN and formerly in one of the most lauded Bowie Knife collections in the country. The knife is pictured on page 123 of Confederate Bowie Knives, a text written by the leading experts in the field. Rarely do such well-documented knives from historic collections come to market, and when they do collectors often jump at the opportunity to own such a well-vetted example of a Confederate knife. You will certainly be glad to add this wonderful knife to your Confederate collection and its size and fierce appearance alone will make it a candidate to be the centerpiece of that collection.