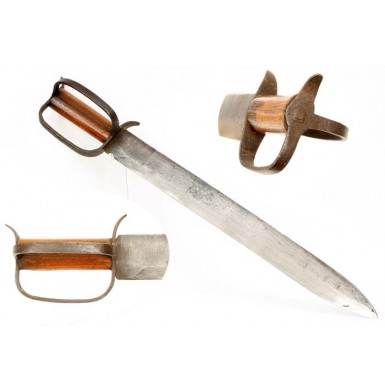 This example of a scarce and desirable Double D-Guard Confederate Fighting Knife is quite massive and could almost be called a short sword as much as a knife! The knife is well documented and is pictured and described on page 239 of Confederate Bowie Knives by Melton, Phillips & Sexton. The knife is somewhat crudely made and assembled, suggesting that the maker was probably a blacksmith and not a cutler. The knife is 24 ““ in overall length, with a heavy 19 ““ long spear point blade without a pronounced median reinforcement ridge. The blade measures about 2 3/16” wide at its widest point, and is secured to the hilt via its iron tang, which is peened solidly at the pommel cap. The blade has a flat spine that measures about .18” at the ricasso, and has a 3 ““ false edge at the tip. The primary forged iron D-Guard is about 4 13/16” in length, with a 1 ““ tall, forward swept quillon at the front and a somewhat unique 1” tall “rear” quillon that sweeps backwards at the pommel cap. Each quillon extends about ““ beyond the guard. The guard tapers slightly at the front and rear of the grip, but is typically about 1 3/8” from the bottom of the wood grip. The second guard extends at a 90-degree angle from the primary guard and was forge welded onto the main guard. This guard extends about 1 ““ from the side of the grip. The grip itself is a single piece of wood through which the tang passes, terminating in a peen at the rear of the primary D-Guard. The massive knife weighs in at about 2 pounds, 6 ounces, and despite the large, fairly thick, blade and significant weight, the knife is relatively well balanced. The wooden grip is smooth and has only a minor taper at the front and rear and no real palm swell. The hilt of the knife is in untouched, attic condition, and the mountings all have a thick, chocolate brown patina and some areas of light surface oxidation. The hilt shows the moderate surface roughness and surface pitting typical of a piece of 19th century forged iron. The blade has been lightly cleaned, and its condition compared to that of the hilt, shows that it was clearly made of quality steel. The blade has a medium pewter patina with evenly distributed patches of darker surface oxidation and age discoloration along its entire length. The blade also shows some scattered patches of light pitting along its length, as well as a handful of small nicks and dings along its spine, and couple of more minor nicks along its edge. The wood grip shows moderate wear and use. It remains solid and tightly attached to the tang. The grip shows some bumps and dings from handling and use and also shows some small grain drying cracks. These are all “with the grain” and all appear to be solid and stable. They seem to be the result of shrinkage and age.

Overall this is simply a really impressive, completely correct and authentic, and well documented in the most authoritative book that has been written on Confederate fighting knives. The knife has a really appealing look to it, with the untouched attic hilt and the blade that shows quality material, if not necessarily expert execution. The opportunity to own a large, and scarce “Double D-Guard” Confederate knife does not occur too often, and the fact that this is a published knife only makes it more desirable.