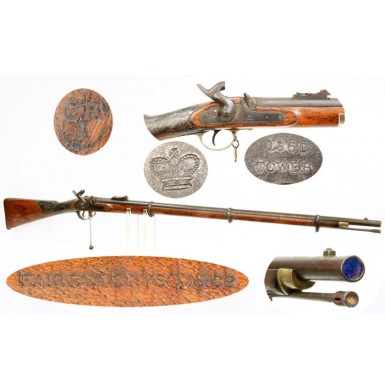 The gun offered here is a classic example of a Confederate purchased Enfield. It is a C H / 1 Confederate Inspected P-1853 Enfield Rifle Musket from one of the numerous Birmingham based makers who helped supply the Confederacy with small arms during the course of the American Civil War. It is not clear if this gun was part of a Barnett contract delivery or not, but my initial thought is that it was not, but might be related to another of the English arms speculators who supplied the Confederacy “ William Joshua Grazebrook. When this gun was disassembled, it was practically devoid of maker and assembly marks, suggesting it was made by a Birmingham maker to fill another maker’s contract. The lock of the gun is marked in the usual fashion for a Birmingham made P-1853 with date the 1862 over the word TOWER, and with a British “Crown” to the rear of the hammer without the British government’s “VR” ownership mark. The barrel shows the typical Birmingham commercial view, provisional proof and definitive proof marks, separated by a pair of 25 gauge marks, indicating the bore is .577 caliber. The only other external mark is a tiny “maker” mark along the toe of the stock that reads FAIRFAX, DYSON & CO. An exhaustive search of available records reveals no British gunmaker or supplier with the name “Fairfax”, suggesting that this may be a retailer mark. Similarly, the only reference I can find to a “Dyson” during the period is to the firm of Gasquoine (sometimes spelled Gasconigne) & Dyson. This firm was located in the marketplace in Manchester during the period and apparently were firearms retailers and possibly wholesalers as well. During the Civil War they appear to have acted as an agent for Eley Brothers, selling ammunition and related components to William Joshua Grazebrook, an English arms speculator, who not only sold arms and munitions to the Confederacy but also financed and owned his own blockade runners (including the ill-fated Dolphin and Modern Greece). I believe that Fairfax & Dyson were another such arms selling firm, possibly only in business during the Civil War years, supplying clandestine arms and equipment to southern buying agents. Further research into this company is certainly worth pursuing and may prove to be quite enlightening.

Internally the gun is almost devoid of markings, a relatively uncommon occurrence on Birmingham guns. The interior of the lock is unmarked, and no fitting or mating marks are noticeable on the edges of the lock plate. The underside of the barrel is marked only with the initials W & G and CB. The CB mark is also found in the ramrod channel of the stock. After consulting my references regarding English gunmakers in Birmingham and the regions during this era, I believe that the “CB” is mark of Charles Baker, who worked from 1861-1869 at Hart’s Mill, Birmingham as a “Gun, Rifle & Pistol Maker” as well as a “Gun Barrel Maker”. I could not figure out who “W&G” is, but they were likely the barrel maker for the gun.

The gun has another wonderful Confederate attribute beyond the CH/1 inspection mark. There is a wonderfully executed period repair to the wrist where a break or major crack has been secured by wrapping the area with two pieces of sheet iron and then screwed in place. Each piece of metal is cut to fit the contours of the wrist area, terminating at the rear of the lock or the stock flat at the front and well onto the butt at the rear. Each piece of metal is about seven inches in length at the longest point and is secured by a series of seventeen screws, which were then filed to the contour of the repair so that they were smooth and did not snag when the gun was handled. This system of filing screw heads to contours of the surrounding wood or metal work is typical of Birmingham and London made firearms of the period, and is certainly an indication that the work was performed by a talented gunsmith. The gun also shows traces of old gold paint, most particularly on the iron wrist repair, with some traces on the brass triggerguard as well. These paint traces are typical of the paint often found on memorabilia displayed in G.A.R. Halls after the Civil War.

The gun is in NEAR VERY GOOD condition overall, and has a very nice, untouched look. The gun shows real use, with some light to moderate flash pitting present around the breech and bolster area. The metal of the gun has a nice, untouched plum-brown patina with some scattered areas of peppering and pinpricking. The underside of the barrel where it has been protected by the stock retains about 80%+ of its original deep, dark, rust blued finish. This proves the gun was never “stuck bright” or given a modern cleaning. Some scattered pitting is also present along the metal with some areas of minor surface roughness as well. The sheet iron wrist repair shows moderate oxidized age discoloration and evenly distributed surface roughness, along with the traces of the previously mentioned old paint. The lock is mechanically EXCELLENT and functions crisply and correctly on all positions. The bore is in about FAIR condition. The bore is very dark and dirty and shows moderate to heavy pitting along its entire length. There is still rifling present in the bore, but the last few inches nearest the muzzle show no discernable rifling, possibly because of the heavy oxidation of the bore. The gun retains the original long-range rear sight and the front sight / bayonet lug. The rear sight remains complete and fully functional The original, full-length ramrod is present under the barrel and retains good original threads at the end. The barrel bands also retain their original “doughnut” screw keepers on their ends, small parts that are nearly always missing. Both of the original sling swivels are missing in action. The upper swivel is broken off, with the small mounting ring still present on the upper barrel band tension screw. The lower swivel is missing as well and has been replaced with an old piece of iron wire. This replacement could be period or could be more recent. The thick patina makes it look like it has been with the gun for a very long time. An original snap cap (cone protector) is attached to this makeshift rear swivel. The brass furniture has a nice, untouched bronze patina that is quite attractive. The stock is in about GOOD to NEAR VERY GOOD condition. It is full length, and has the significant repair to the wrist already described, which certainly has the appearance of being a Confederate arsenal repair. There is an additional repair at the butt, where a 7” long diagonal crack has been stabilized by the insertion of a long screw or pin in the bottom of the butt, with the hole subsequently filled. The repair is solid and secure. The stock shows some traces of the old paint as well as some old varnish that appears to have been stripped off as well. The stock does not appear to have been sanded, but shows some drawknife type marks typical of Confederate arsenal refurbishment. The edges are still reasonably sharp with good definition and the crispness of the CH/1 mark and the retailer mark in the toe of the stock certainly indicate the stock was not sanded. In addition to the above mentioned repairs, there are the usual array of bumps, dings and mars over the length of the stock, as would be expected of any military long arm that saw actual use in the field.

Overall this is a really interesting Confederate inspected P-1853 Enfield with a wonderful field used and untouched look that displays really well. The wrist repair looks great, and really adds to the eye appeal of this musket, giving it a wonderful “been there, done that” look. This is a very cool, 1862 dated Confederate musket that certainly saw significant military service, with a clear Confederate CH/1 mark and a great attic patina. This will be a great addition to any collection of Confederate Civil War arms, and is priced very reasonably for the amount of history that this gun represents.