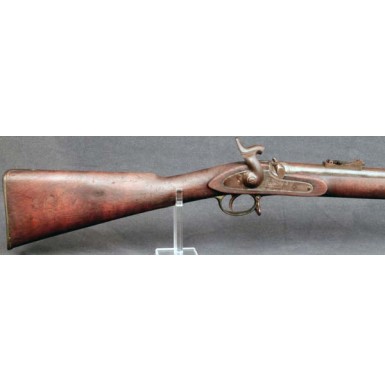 For collectors of Confederate marked & imported Enfield rifle muskets, the examples marked for specific Confederate state purchases are the most sought after and highly prized. The classic Georgia “G” and South Carolina “SC” and North Carolina “NC” marked weapons demand high premiums and are often the centerpieces of advanced Enfield collections. The states started to mark the guns that they had purchased after several early shipments of state owned guns were confiscated by the Confederate Central Government upon their arrival in Southern ports. One of the most desirable and eagerly sought after of all the state markings is that of the state of South Carolina. These guns are very scarce rarely encountered for sale, and when they are they usually bring prices that approach (and sometimes exceed) the low 5 figures! South Carolina marked guns are unique also, as there are some variations in the size and style of markings, which appear to correspond to three different contracts. The known examples are found in the 40” “Diamond C” barrel variant, the Birmingham contract variant and the Barnett contract variant.

This wonderful example of a South Carolina marked, Confederate purchased P-1853 Type III Enfield Rifle Musket is the Barnett variant with the mark that is referred to by collectors as the “Large SC”. The gun is marked with large, serif block letter on the right side of the buttstock: S.C. The letters are each about .7” tall and about .5” wide. Like many state contract procured and marked guns, the musket was a product of the firm of John Edward Barnett and Sons of London. The gun is also stamped with the inventory number 533 on the bottom toe of the buttplate. This style of inventory marking, instead of the better known engraved number on the buttplate tang, is often encountered on Confederate marked Enfields delivered by Barnett. Known “Large SC” Barnett guns range in inventory number from the low 20’s to the mid-900’s, and this gun falls squarely in the middle. Most Enfield collectors and researchers believe that the “Large SC” mark is the scarcest variant of the South Carolina guns, with less than 10 known to exist. The total number of surviving SC marked Enfields of all varieties appears to be between 30 and 40 “ based upon best estimates.

The South Carolina marked Enfield Rifle Musket offered here is in about ATTIC FINE condition. The gun is nearly 100% complete, correct and original in every respect, with the only exception being the ladder and leaf of the rear site having been replaced. As is common among the small number of South Carolina guns known, the lockplate is clearly marked forward of the hammer BARNETT / LONDON. There is also a small (CROWN) / B on the lock “ a Barnett maker mark. These are the marks of John Edward Barnett & Sons who were the oldest and most prominent of the London gunmaking companies. They could trace their history to 1628, and in 1637 King Charles I appointed a Barnett the first president of the gunmakers guild. The company continued in business until just before World War I. While it is impossible to know for sure, surviving documents seem to indicate that all of Barnett’s production of Enfield pattern arms during the first 2-3 years of the war (that were not contracted for by the British Government) went to fill Confederate arms contracts from S. Isaac Campbell & CO, and the various Confederate States. There is no crown mark to the rear of the hammer, and the lock plate shows the double line engraving typical of one produced on contract in Birmingham or The Regions. The barrel is marked with standard London commercial proof and view marks. The comb of the stock is marked with a (CROWN) / “ forward of the buttplate tang. This appears to be another Barnett (Crown/B) maker mark. The ramrod is marked with the initials T&CG for Thomas & Charles Gilbert of Birmingham. A “small work” maker who produced many ramrods and small gun parts for Birmingham and London makers from the 1850’s until they went out of business sometime between the last part of 1862 and the beginning of 1863. The interior of the lock is marked with the name BARNETT above the mainspring, and also shows the assembler initials GF. The barrel is also stamped BARNETT, as well as being marked with the name of the barrel maker EZRA MILLWARD and the assembler initials GF. The barrel making firm of Ezra Millward was established in Birmingham in 1827 and remained in business through 1878. They did business as Ezra Millward & Son from 1857 through 1878 and were located at their Aston Junction Mills, Mill Street & Dartmouth Street from 1842 until they went out of business. The flat of the stock, opposite the lock is marked R. G. FRASER, who was likely the “setter-up” (assembler) of the gun. The gun shows the usual chisel cut assembly marks that we have come to expect on contractor produced Enfield rifle muskets, and the mark | | | | is present on the bottom of the barrel, on the bottom edge of the lockplate, in the stock and on the necks of the screws. The gun has a mostly smooth, lightly oxidized brown patina, with scattered patches showing less brown and more of the underlying pewter metal. There are a few patches of minor peppering and pinpricking present on the barrel, but no significant pitting. The bore of the musket rates about FAIR+ to GOOD. The bore is dark and dirty with strong rifling present, but with even pitting along the entire length of the bore, and a few patches of more significant roughness and erosion. The lock functions perfectly on all positions and remains very crisp and tight. The gun retains both of the original sling swivels, as well as the original long-range rear site base “ although the ladder and slide are replacement. As previously noted, the original maker marked ramrod is present in the channel under the barrel. It is full length and retains good threads on the end of the rod. The brass furniture has a thick, dark greenish-mustard patina and is quite attractive. The inventory number 533 is stamped into the bottom toe of the butt plate. The stock is in about FINE condition overall and is solid, complete and free of breaks, cracks or repairs. The stock shows a number of bumps, dings, nicks and even some tiny minor gouges near the butt plate “ all indications of significant use in the field, but no indication of any abuse. The stock has a dark and slightly dry look to it, indicating it was probably stored in a dry climate for a very long time. The stock retains very crisp edges and has fine lines throughout, with the excellent wood to metal fit that one expects to find in a Barnett contract musket.

All in all this is simply a great looking example of a very scarce and very desirable Confederate purchased and South Carolina marked Enfield rifle musket. The gun is complete and correct (except as noted regarding the site), and has fine markings throughout. Any state marked, Confederate purchased Enfield is a scarce item, and that scarcity, their overall desirability and the infrequency of their appearance on the market has driven prices to almost absurd levels over the last few years. In 2005 an SC marked P-1853 in somewhat lesser condition sold at auction for well over $8,000, and in 2007 a superb example sold at auction for more than $25,000! This gun could well be the centerpiece of your Confederate Enfield collection, and it is unlikely that a more fairly priced example will appear on the market anytime soon.