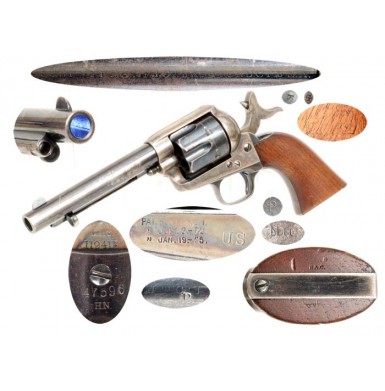 In 1893 the United States military began the process of recalling the Colt M-1873 “Single Action Army” .45 caliber revolvers, many of which had been in service for almost two decades, in order to replace them with the newly adopted M-1892 Colt “New Army” Double Action .38 caliber revolver. Initially the new .38 revolvers were only issued to cavalry regiments, and as sufficient quantities were available to reequip a regiment, the new guns were issued and the venerable .45 caliber single action Colts were returned to the nearest arsenal for storage and future issue if needed. However, the .45 Colts still remained the standard service revolver for the infantry and artillery, with the new .38s being specifically intended for cavalry issue first and other branches as the new guns became available. It was during this time that complaints from the field continued to come from light artillery regiments about the length of the single action Colt’s barrel. The light or “horse” artillery had long complained that the barrel and holster length were uncomfortable for the men who were intended to ride upon the caissons and limbers of the artillery pieces while they were being drawn by the team of horses. As a result, in August of 1894, the Ordnance Department requested a study be completed at the National Armory in Springfield, MA regarding the feasibility of shortening the 7 ““ long barrels of the current stocks of .45 caliber revolvers to a more convenient length of between 5” and 5 “. Two sample guns were altered, one shortened to 5 ““ and one to 5”. The comparative tests between a standard 7 ““ barreled revolver, a 5 ““ barreled revolver and a 5” barreled revolver showed that the accuracy, penetration, velocities and force of impact were not sufficiently altered to make a major difference in performance. While the tests noted the velocity of the bullet dropped in the shorter barrels, it was in fact no less than the velocity of the newly adopted .38 revolver round fired from the M-1892s 6” barrel, and in fact, even from the shorter barrels the .45 caliber round retained more impact energy than the new .38 Colt did. The initial test results were positive enough that in September additional tests were commenced, with alterations performed to six additional single action revolvers. These guns were all late production Rinaldo A. Carr inspected guns in the 13XXXX range, delivered in 1890 & 1891 and still in new, unissued condition. The guns had their barrels shortened a number of times, with the front sight relocated each time. The guns were tested for accuracy, penetration, velocities and force of impact at each barrel length and the results were recorded. The initial testing took place with the factory original 7 ““ barrel length, and then each revolver had its barrel shortened to 6 “, 6”, 5 “, 5”, 4 ““ and 4”, with the same tests repeated at each length. The lengthy report regarding these tests is best summarized by a single sentence which reads:

“From the results of the test, the Board is of the opinion that the barrel of the service Cal. 45 Colt’s revolver might be reduced to the length of 4 ““ with no material loss in accuracy or in stopping power and with a slight gain in lightness and a decided gain in the ease of manipulation.”

The report was approved and endorsed at the highest levels of the Ordnance Department, with the additional note that “The conclusions drawn from the tests, disregarding the “gain in ease of manipulation”, is that a length of barrel of 5 inches is the most advantageous.” The final result was that on May 25 of 1895 an official order was forwarded to the Springfield Arsenal for the alteration of 250 “Colt’s Revolvers, Cal. 45” to have their barrels shortened to 5 “. Why the length of 5 ““ was chosen after 5” was recommended is unclear, but two factors probably influenced the decision. One reason was that the 5 ““ barrel was a standard production factory barrel length for civilian market Colt Single Action Army revolvers. The other may simply have been one of consistency, as a 5 ““ M-1873 and a 6” M-1892 revolver are very similar in overall length. These newly shortened revolvers were to be issued for field trials to various light artillery batteries. At that time, the Colt Single Action Army “Artillery” alteration, as it is known by collectors, was officially born. Although the Ordnance Department never used the term “artillery” to describe the shortened .45 Colts, the fact that the shortening was prompted by complaints from the light artillery, and that the first 250 altered guns were issued to 10 light artillery batteries for field trials (25 guns to each battery), have combined to give this pattern of martial Colt single action the nickname that it will have in collector parlance forever.

This Colt Single Action Army Artillery Revolver remains in about VERY FINE condition. The markings on the gun are described in detail above, both the various parts serial numbers (if present), and their sub-inspection marks, as appropriate. The frame and barrel markings are also discussed above. As noted, some of the serial numbers and factory markings are partially obscured or worn away, primarily due to the necessary buffing and polishing required to refinish the revolver. It is my belief that the revolver was likely altered to the 5 ““ “Artillery” configuration at the Springfield Armory and was subsequently refurbished by Colt circa 1900-1903 as indicated by the grip inspection marks. The barrel retains about 50%+ of this period applied blue finish, which has thinned and worn along its entire length. The finish wear is completely consistent with real world use, as the areas of the deepest, best preserved finish are in the protected areas along the top and bottom of the ejector housing where it meets the barrel, at the frame junction and around the cylinder arbor pin. The most consistent points of wear are holster related, along the top and left side of the barrel, at the muzzle and along the exterior edge of the ejector housing. The barrel retains traces of the feathering at the front sight that is associated with a Colt factory or arsenal refinished blue, something that is practically never found on any aftermarket refinish of a Colt revolver and that suggests strongly that this is the original period finish and not some later applied blue. The areas where the finish has worn have developed a mostly smooth pewter gray patina that is very attractive. The barrel is mostly smooth, with some scattered pinpricking and minor surface oxidation present. Some flakes of brownish oxidized discoloration are scattered throughout the remnants of the finish, which is typical of 19th century rust and nitre bluing but rarely encountered with modern finishes. The frame retains about 85%+ of the Colt factory reapplied case hardened finish. The case color still remains quite vivid with some dulling and fading from age, but is still very attractive. The frame is mostly smooth as well, showing only some very lightly scattered pinpricking and similar freckled areas of minor surface oxidation and discoloration as found on the barrel. The cylinder retains about 70%+ of its period blued finish. The finish loss is in the typical areas, at the leading edges and high points, and a single thumb sized area of loss suggests the revolver may have laid on its side on fabric for some period of time, causing the loss on the cylinder and some of the loss on the left side of the barrel. The flutes retain a nice, rich blue color that is very attractive with some scattered flecks of brown oxidation visible. The areas of the cylinder that have had the finish wear away have a dull smoky blue-gray patina that blends well with the remaining blue. The cylinder also shows some lightly scattered age discoloration and minor surface oxidation. Again the metal is mostly smooth with only some lightly scattered pinpricking present. The triggerguard retains about 80%+ of its blued finish, while the backstrap, butt and gripstrap all retain much less of their blued finish, probably closer to 50%. These areas show the expected wear and fading from handling and use, and have the same dull pewter patina found on the other areas of exposed metal on the gun. The trigger retains some bright fire blue on its edges, but has a mostly dull blue-gray patina on its face. The hammer retains about 60%+ of its vivid case coloring, most of which is on the right side of the hammer, while the left side has dulled and faded to a more mottled slivery gray color. The revolver is mechanically EXCELLENT and functions crisply and correctly on all positions. The revolver times, indexes and locks up exactly as it should. The ejector rod functions smoothly and the loading gate operates correctly, locking firmly into place when closed. The bore of the revolver is in about FINE condition as well. It is very bright and retains very good, very crisp rifling along its length. The bore shows some light pitting scattered along its entire length with some tiny areas of more moderate pitting. A good cleaning might improve the bore condition even more. The one-piece grip is in VERY GOOD condition, and remains crisp, solid and complete. The grip is free of any cracks, breaks or repairs. The grip shows the expected bumps, dings and mars from service, use and storage, but no abuse. The grip primarily shows wear along its sharp edges at the base and to the sharp corners at the leading and trailing edges. These areas have worn down and are no longer sharp. All of this is normal expected wear form use.

Overall this is an exceptionally nice example of a Colt Single Action Army Artillery Alteration Revolver. The gun is particularly desirable because of its high level of finish and vivid case coloring on the frame. The gun has a wonderful, honest appearance and displays very nicely. This is a very high quality example of an altered martial single action revolver that probably saw service for nearly 30 years, with the parts originally on the frontier fighting Indians during the 1870s & 1880s, then fighting in Cuba and eventually the Philippines. Considering the prices that marital single actions have been bringing recently and how desirable the artillery alterations are becoming, this is a really fantastic example of an interesting and historic revolver at a reasonable price for its very fine condition.