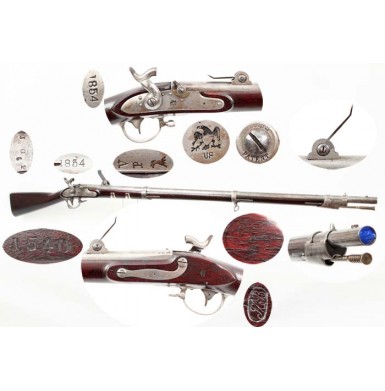 Overall this is simply an outstanding example of an extremely rare Colt firearm, the Russian Contract Musket. Even though the guns were not delivered in time, there must not have been any bad blood between Colt and the Russians, as after the Civil War the Russian’s purchased several thousand Colt Berdan Rifles. This fantastic musket would be a centerpiece in any display, whether it centered on percussion conversion muskets, Russian infantry arms or Colt firearms. It is rare to find an American firearm that is so scarce and so difficult to value that it is no listed in Flayderman’s Guide Antique American Firearms & Their Values, but this gun is not found within that reference. According to the Standard Catalog of Colt Firearms and the 2012 Edition of the Standard Catalog of Firearms, these very rare muskets are valued at $10,000 in Very Good condition and $15,000 in Excellent condition. As I have only seen one other example for sale in the last decade, I’m not sure I know how they managed to value the guns, other than on their rarity. This is a near excellent condition example and it is priced at less than half of the “excellent” condition price. This is a very scarce gun, with less than 10 thought to still exist, and a very important gun for a collector of Colt arms, Russian arms or Crimean War arms (not to mention a treat for a Garibaldi collector”). It is not clear when another example will appear on the market, and it would be hard to find one this nice if one did show up for sale. Additionally, this gun is the example published in Volume III of Moller, so it is a well-documented historic arm. This is one of those great once in a lifetime guns that you will probably kick yourself for not buying. I’ve wanted to own one for over 20 years, now I have, and now it is your turn to add a real centerpiece to your advanced arms collection.