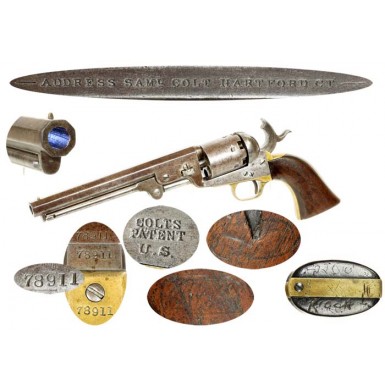 This is a really very nice example of a Colt M1851 "Navy-Army" percussion revolver in about VERY GOOD condition. The gun is a typical 3rd Model revolver with the small brass trigger guard, thin loading lever latch and large percussion capping cutout. As a martial revolver, it is correctly marked with sub-inspection letters, "US" ownership marks and inspection cartouches on the grips. The gun is serial numbered 78911, placing production in the latter portion of 1857. The revolver was probably part of the May 13, 1857 contract and was likely delivered by the end of 1857 or during the first quarter of 1858. The serial numbers match throughout, with even the wedge number and matching. The wedge, loading lever and cylinder arbor show only the last 4 digits of the number, 8911, while the balance of the numbered components have all five digits present. The one-piece walnut grip is ink numbered 8911 in the backstrap cut out, in a legible period hand. The revolver is crisply and clearly marked on the lower left side of the frame: COLT'S / PATENT / U.S., and with a small factory inspector's V on the front left web of the triggerguard. The face of the cylinder is stamped with a * between one of the chambers and the central hole for the arbor. This is a US government ownership mark. The gun shows multiple sub-inspection initials throughout out with an H and a M on the cylinder, a C on the grip strap and backstrap, and an S on the top of the barrel, at the end of the barrel address. The one-piece oiled walnut grip is cartouched on both sides. The right side bears a partially legible sub-inspector's cartouche in a rectangular cartouche with rounded edges that appears to be the script ADK of arsenal sub-inspector A.D. King. The right grip shows the oval cartouche with rounded ends of US Ordnance receiving officer William Anderson Thornton, and his script WAT remains crisp and clear. The top of the 7 “" octagon barrel is clearly marked:

The gun is in about VERY GOOD condition overall, and for a martial M1851 Navy revolver it is really much better than most examples encountered today. The revolver retains none of its original blued finish. The overall, the gun has a mostly smooth, plum brown patina that is slightly mottled with areas of darker oxidization and discoloration. The casehardened frame has a mottled, smoky gray patina with areas of oxidized discoloration, which hints at the original mottled case colors. The barrel is free of any significant pitting, but there is some lightly oxidized freckling scattered along the barrel and some moderate pinpricking present on the face of the muzzle. The pistol shows the usual impact marks on the barrel web where the wedge had been beaten out of the pistol during its service life, and then beat back into place. Most of the marks are confined to the right side of the barrel. The bore of the revolver rates GOOD+ to NEAR VERY GOOD as well. The bore has a dark, oxidized patina but retains strong rifling its entire length. There is lightly scattered pitting the entire length of the bore, with a few scattered patches of more moderate pitting. The loading lever moves smoothly and operates correctly. It also locks tightly into place, as it should, when not in use. The cylinder retains none of its finish either, and has a slightly thinner, oxidized brown patina than the barrel. The cylinder retains only traces of the roll engraved Mexican War naval battle scene. This is not uncommon, as regularly holstering and un-holstering the revolver tended to wear the thinly rolled scene, resulting in its disappearance over time. The cylinder is clearly marked with the serial number 78911, but the COLT'S PATENT No part of the marking is worn away. All of the safety pins on the rear face of the cylinder are battered, worn and essentially remain only as worn lumps. The brass grip frame, grip strap and trigger guard show no silver-plating. As many of the Colt revolvers were delivered with "military finish", it was not uncommon for the silver plating of the brass to be omitted, the bluing to be a lower quality and lower polish than that found on civilian guns, and the grips to be oil finished instead of varnished. The action of the revolver remains excellent, and the gun functions correctly. The timing, indexing and lock up and excellent and the revolver remains very tightly. The action of the pistol is extremely crisp. All of the screws are original, and most are relatively crisp, showing only minor to moderate slot-wear. The original brass post front sight is in place on the top of the barrel, near the muzzle. The military style one-piece, oiled walnut grip is in about VERY GOOD condition. As noted it is numbered to the revolver and fits the frame of the gun perfectly. The grip is free of any breaks, cracks or repairs, and remains very crisp and sharp. The grip shows scattered light to moderate bumps and dings from handling and use. The only wood loss noted on the grip is the rounding of the sharp corners at the bottom leading and trialing edges where they show minute chips. As noted above, the grip shows a pair of partially legible inspection cartouches. The bottom of the grip is carved with the name Koch, possibly the name of the trooper who carried the gun. The name is deeply and somewhat crudely carved and certainly appears to be contemporary with the period of use. With more than 900 US soldiers and almost 40 CS soldiers with that last name who served during the war, it would be impossible to determine who this particular "Koch" was. The bottom of the grip is also scratched with the number 2200, the meaning of which is unknown.

Overall, this is a really solid example of a pre-Civil War production, US military contract Colt M1851 Navy-Army. The gun is 100% complete, correct and original in every way and revolver is correctly martially marked throughout. It is very attractive and displays quite nicely. The revolver has all matching serial numbers, is mechanically excellent, and retains nice markings. Pre-Civil War and Civil War era martial Colts are very difficult to find in this kind of solid, complete condition, as most saw heavy use in the years leading up to the Civil War and often even harder use during the war. After nearly a decade of constant military issue and use (and another 150 years since the war), few marital Colt Navy revolvers survive today in much better than "fair to good" condition. This one is fairly crisp, retains a nice uncleaned patina and is very well marked for a martial revolver. If you only have one Colt Navy in your collection, a martially marked US Army issued Navy is a hard one to beat. I am quite sure that this will be one of those guns that you will be very happy to have in your collection. Of all the Civil War era handguns, the Colt Navy is probably the most representative example of what a common cavalryman on either side would have had access to, in terms of a "combat" handgun. It's no wonder that the Colt Navy was a favorite of cavalrymen both North and South and that so many Confederate-made revolvers were essentially copies of the M1851 Colt.