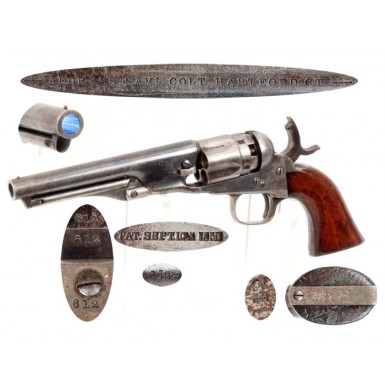 In 1861 Colt introduced two new pocket model revolvers in the more powerful .36 caliber chambering. Until that time, all of Colt’s “Pocket” guns had been .31 (or in the case of some of the Root revolver production, .28 caliber). These new pocket revolvers can be considered “scaled up” 1849 Pocket Models, or scaled down Belt Pistols (aka “Navy” models), as the guns had features found in both their smaller and larger siblings. The two new models were known as the Model 1862 Police and the Model 1862 Pocket Navy. The “Police” model resembled a scaled down, early production Colt M-1861 New Model Belt (Navy) revolver, built on a Colt M-1849 Pocket frame. The .36 caliber revolver had a five shot fluted cylinder and the grip frame and triggerguard were of Colt Pocket size and style. It had a round barrel, a creeping loading lever and was available in 3 “, 4 “, 5 ““ and 6 ““ barrel lengths. The Pocket Navy was essentially a scaled down M-1851 Navy built on a M-1849 Pocket frame, with a .36 caliber, 5 shot, rebated round cylinder that was roll engraved with the same Stagecoach Hold Up scene used on the M-1849 Pocket. Like the Police model it used a Pocket sized frame and triggerguard, but had an octagonal barrel and conventional swinging link loading lever like those used on the M-1849 and M-1851 revolvers. Like the Police, it was available in four barrel lengths from 3 ““ to 6 “, in 1” increments. Both revolver models came standard with blued barrels and cylinders, color case hardened frames and hammer, and with silver-plated brass backstraps, gripstraps and triggerguards. A few of the revolvers were produced with iron grip frames, backstraps and triggerguards, which were also silver plated, but these are only found on very low number, early production revolvers. Early production revolvers will be found with the desirable Hartford barrel address, but the majority of the production carried the typical New York barrel address. Although both models are referred to with the model date of 1862, both guns actually went into production in 1861, and would remain in production until the end of the Colt percussion era in 1873. During that time some 47,000 of both models would be produced, manufactured concurrently with both utilizing models being serial numbered in the same series, regardless of the model. According to Colt researcher and author R.L Wilson, it is believed that about 60% of the total production of the two models was of the 1862 Police pattern, which would be approximately 28,200 guns, produced over about the 13-year production period. Compared to the Colt Pocket, with about 331,000 produced, this makes the 1862 Police a much less common gun, with only 1 being manufactured for about every 11 M-1849 Pocket Models.

The Colt Model 1862 Police Revolver offered here is in about VERY FINE condition. The revolver is one of the scarce, very early production guns with an iron grip frame, backstrap and triggerguard. The revolver is serial number 612 and was produced in 1861. The revolver has a 5 ““ barrel and the typical fluted cylinder of the 1862 Police model. The top of the barrel is marked in a single line with the very desirable Hartford address and reads:

Dashes are found at each end of the barrel mark. The lower left side of the frame, forward of the cylinder is marked in two lines: COLT’s / PATENT, and one of the cylinder flutes is marked: PAT. SPET. 10TH 1850. The matching serial number 612 appears throughout the revolver and is present on the bottom of the barrel lug, frame, triggerguard, butt and in one of the cylinder flutes. The matching serial number is stamped on the wedge as well. The revolver retains a large amount of its original finish, with about 60%+ of the original vivid case coloring remaining on the frame, with the right side of the frame retaining more color than the left. The balance of the frame has faded to a silvery gray patina with some traces of dulled mottling mixed in. The frame is mostly smooth, with only some lightly scattered pinpricking present, mostly just below the cylinder. The 5 ““ round barrel retains about 60% of its bright original blue as well, with the usual wear and loss from carry and use, mostly along the high edges and contact points. The blue remains brightest and deepest on the barrel web and along the bottom portion of the barrel where it has been protected by the loading lever. The barrel is free of any notable pitting, but does shows a little bit of lightly scattered pin pricking, mostly around the forcing cone and the muzzle. The bore of the revolver is in about FINE condition as well and is mostly bright with crisp rifling and showing only some lightly scattered pitting along its length, mostly in the grooves. The original truncated brass cone front sight is in place on the top of the barrel, near the muzzle. The creeping loading lever retains about 25% of its case coloring, with the balance of the lever having faded to a smoky gray patina with some scattered areas of darker mottling. The loading lever functions smoothly and correctly and locks securely into place under the barrel when not in use. The rebated fluted cylinder retains about 20%+ original blue, mostly in protected areas like the flutes and cylinder stop notches. The cylinder shows some small areas of very light pitting scattered over its surface, as well as some pinpricking, most of which is around the cut outs for the cones (nipples) and around the chamber mouths. All of the original cones remain in place and show light to moderate wear, but remain fairly crisp and quite usable. The original safety pins remain in place on the rear of the cylinder and are in good, usable condition as well. The cutouts for the percussion cones at the rear of the cylinder show the expected light corrosion and oxidation expected from the caustic wear of percussion cap flash. The hammer retains about 20% of its case coloring, with the balance of the hammer having a mottled smoky gray patina with some areas light silvering. The rare iron grip frame and triggerguard retain about 20% of their original silver plated finish, most of which is confined to the tight recesses, nooks, crannies and protected areas of the frame. The exposed iron has a mostly smooth pewter-gray color to it, with some lightly scattered areas of darker surface oxidation. The bottom of the gripstrap is a mixture of pewter colored iron, flecks of silver plating and scattered small patches of brown surface oxidation. The screws all remain quite sharp and crisp, and most retain at least traces (if not more) of their original faded fire-blued finish. The revolver is in mechanically EXCELLENT condition and times, indexes and locks up perfectly. The action remains crisp and tight and the revolver operates exactly as it should. The one-piece walnut grip is in FINE condition and free of any breaks, cracks or repairs. The grip retains about 65%+ of its original varnish, with most of the wear and loss around the base of the grip. These areas show the most wear overall, with the flared edges softened and rounded somewhat, indicative of a substantial amount of carry. The grip does show numerous small dings, rubs and mars, but nothing indicative of abuse, just lots of carry and use.

Overall this is very attractive and desirable example of a scarce iron grip frame Colt Model 1862 Police revolver, produced in 1861. The gun is very crisp, mechanically excellent and retains lots of original finish. The 1862 Police is literally 10 times less common than the 1849 Pocket, so the chances to obtain a really fine example come along very rarely. This is a really fine condition example of an early production, iron backstrap .36 Colt Police that will be a wonderful addition to your collection of Colt percussion revolvers or Civil War era handguns.