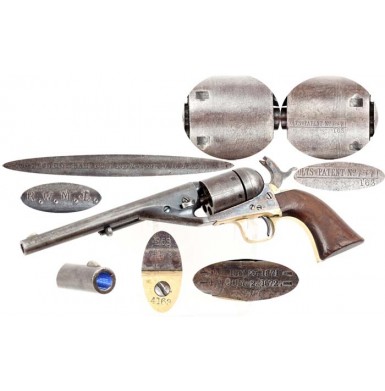 This Richards-Mason Converted Colt M-1861 Navy-Navy revolver in about FINE overall condition and is a wonderful example of a war time Navy purchased Colt M-1861 returned for alteration to .38 Long Colt circa 1873. The revolver is serial number 4163, which places it in late 1861 production, which ended at approximately 4,600. Colt delivered 2,000 M-1861 Navy revolvers to the Navy during 1861, about 43% of that year’s total production of that model. The serial number is found on all major components, with the exception of the unmarked wedge, which was replaced by Colt during the alteration process. The lower front portion of the left side of the frame is marked in two lines: COLT’s / PATENT , without the “US’ found on M-1851s purchased by the Navy. Amazingly, the markings are all still quite legible, even after the Colt refinishing of the frame and the addition of the new patent marks that Colt stamped over the original ones. The new patent marks are stamped in two lines: - PAT. JULY. 23, 1871. - / - PAT. JYLY. 2, 1872. - , with dashes at the beginning and end of each line. The round barrel is marked with the late production New York barrel address that reads: “ ADDRESS COL. SAML COLT NEW - YORK U.S. AMERICA”. The cylinder is marked with the usual COLT’s PATENT No 4641, with the new matching serial number 163 (the last 3 digits of the serial number of this gun) stamped under the mismatched serial number 4641, the number of the gun that the cylinder originally came from. The cylinder arbor is numbered 4163 as is the loading gate. The cylinder is roll engraved with the typical naval engagement scene which remains about 60%+ visible. Even the ENGAGED 16 MAY 1843 remains mostly legible. The rear face of the cylinder also bears a single D inspection mark. The bottom of the barrel is crisply stamped with the R.W.M. (ANCHOR) inspection mark, so we know the gun was sent to the New York Navy Yard after it was converted by Colt. The gun is in FINE condition and remains very crisp and sharp throughout, with good edges and clear markings. The pistol retains about 30% of its original Colt factory blued finish on the barrel, mostly on the barrel web and in protected areas around the edges of the ejector housing. The balance of the barrel retains strong traces of blue that has blended with a smooth plum brown and gray patina over the balance of the barrel. The frame retains about 80%+ of the vivid Colt case hardened finish, with the balance of the frame dulling and fading to a pewter gray patina. The hammer retains about 80%+ of its vivid Colt case hardened finish as well. The metal surfaces are mostly smooth, with some scattered patches of light pinpricking, mostly on the barrel. There are also some areas of light surface oxidation around the muzzle, and scattered on the barrel. The cylinder retains about 60%+ of the roll engraved Mexican War naval battle scene, and has a smoky blue-gray patina mixed with some minor traces of finish. The loading gate retains only traces of its original case hardened finish and has a slightly mottled smoky gray look. The gate uses the less common “outside” spring to secure it, and the spring retains about 50% of its original niter blued finish. The gate functions smoothly and correctly. The action of the pistol is EXCELLENT and the revolver remains tight, timing and indexing perfectly and locking up as it should. The trigger retains bout 30% of its original niter blued finish, with the balance toning to darker dull blue, and functions crisply as well. The both the brass backstrap and triggerguard were polished by Colt during the alteration and refinishing process and as a result their serial numbers are slightly weak. The brass now has a golden ocher patina that is very attractive. The ejector rod housing retains about 25% of its original blue, most of which is in the protected nooks and crannies where it mates with the barrel. The ejector rod button is of the correct kidney shaped pattern with the concentric rings, and retains about 30% of its niter-blued finish, which is dulling down to bluish gray. The ejector rod functions smoothly and correctly as well. The gun appears to retain all of its original screws as well, which are all in very nice condition and show minimal slot wear. The screws all retain at least some of their niter-blued finish, although most have faded and dulled with age. The bore of the pistol rates about VERY FINE overall. It remains mostly bright, with very crisp rifling and only some very lightly scattered pitting along its length. The one-piece, oil finished, black walnut grips are in VERY GOOD+ condition, and are free of any breaks, cracks or repairs. The grips are original to the gun and not replacement grips installed during the alteration process at Colt. The serial number 4163 is written in pencil in a period hand in the backstrap cut out of the grips. The replacement grips installed by Colt were not numbered to the guns. The grips do show some of the expected bumps, dings and handling marks from use and service. The grips show a couple of tiny chips, both at the leading edges of the bottom front of the grip frame. This is minor, but mentioned for exactness, and in no way affects the display of this rare pistol.

Overall this is a really lovely, 100% original complete and correct Colt M-1861 Richards-Mason Converted Navy-Navy. These are very scarce guns, with only about 1,100 so altered. This gun has a really wonderful look and has not been messed with in any way. It is in much better condition than most Navy purchased M-1861 conversions encountered. This is one of those guns that had a service life of well over 3 decades, serving the navy in the years leading up to the Civil War, during the war and then being converted in 1873 to serve another decade or more until the M-1889 Colt Navy double action revolver was taken into service. With all of that service and use it is amazing the gun is as crisp as it is. A Colt “Navy-Navy” is a real coup for any serious collector of US marital revolvers to acquire, and a Richards-Mason conversion is even harder to find. This gun would be a great addition to any such collection or to a Civil War or USN collection. This is simply a great gun that you will be very proud to own and to display, and would certainly be worth obtaining a Colt factory letter on, if the records for the gun are available.