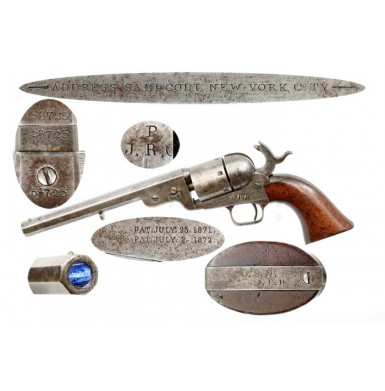 The mid-1850s was a revolutionary time for small arms development around the world, and the United States was no exception. The US Army had already adopted the percussion revolver in limited numbers for the US Mounted Rifles and US Dragoons by acquiring Colt “Dragoon”, .44 caliber “holster” (as in pommel holster) revolvers in 1848. The US Navy, however, remained steadfast in their belief single shot, muzzle-loading pistols were sufficient for the use of their seamen. In 1851 Colt introduced his “belt revolver”, a slimmed down, lighter weight, 6-shot .36 caliber handgun that would become known by its year of introduction as the Model 1851 revolver, or simply by its nickname, the Colt “Navy” revolver. The number of Colt’s .36 caliber M-1851 “Navy” revolvers purchased by the US Navy was rather limited. While Colt had vigorously lobbied the Navy to purchase his revolving pistols during the early 1850s, he met with significant resistance. He did manage to secure an order for 100 revolvers in June of 1852 for the use of Commander Perry’s command on his voyage to Japan. However, the general belief of the Naval Ordnance Department was that pistols were only of use while boarding an enemy ship, and in those circumstances edged weapons such as sabers or axes were of more use to the typical seaman. In fact, the chief of Naval Ordnance, Commodore Morris, wrote to Secretary of the Navy James Dobbin on June 21, 1854, noting in part:

This Richards-Mason Converted Colt M-1851 Navy-Navy revolver is part of the original order for 2,000 guns and was one of the very first gun delivered, arriving with 614 other “navies’ at the Norfolk Naval Yard on November 9, 1857. There they were inspected by Commander James L. Henderson, who inspected small arms at Norfolk from June of 1857 through April of 1861. Henderson’s J.L.H. inspection mark is clearly stamped in the bottom of the iron grip strap, along with the initials U.S.N.. Henderson was the only US Naval inspector to put his mark in the metal of the gun, with all other inspectors marking the bottoms of the wood grip. As the grip was usually replaced during the alteration to cartridge at the Colt factory, it is difficult to determine where those guns were originally delivered. In this case, we know for certain which shipment of arms, and to which naval facility the revolver was originally delivered in 1857. The revolver is serial number 58725, which places it in late 1856 production. The serial number is found on all major components, with the exception of the cylinder (which will be discussed below) and the unmarked wedge, which was replaced by Colt during the alteration process. Like all of the Colt M-1851s delivered under the 1st US Navy contract, the revolver has a London style iron backstrap and a large London style iron triggerguard with a “squared off”, “flat bottom” profile. The lower front portion of the left side of the frame was originally marked in three lines: COLT’s / PATENT / U. S., but as it typical on the altered and refinished revolvers, the markings are now quite weak with the “US’ gone and the word “PATENT” partially obscured. The left side of the frame is additionally marked in two lines: PAT. JULY. 23, 1871. / PAT. JULY. 2, 1872. The octagonal barrel is marked with the early production New York barrel address that reads: “ ADDRESS SAML COLT NEW - YORK CITY”. The cylinder is marked with the usual COLT’s PATENT No 2438 and with the typical naval engagement roll engraved scene, which remains about 25%+ visible. Amazingly the ENGAGED 16 MAY 1843 legend at the front edge of the cylinder remains mostly legible. The cylinder also bears a Civil War era Naval inspection mark on its side, a P / J.R.G.. In 1865, and the end of the Civil War the US Navy started a process of re-inspecting the small arms then in inventory. The inspection process had been revised in 1864 and required the inspector to place a “P” over the inspector’s initials on the face of the cylinder of revolvers, and a small anchor on the top of the barrel at the frame junction. These instructions were interpreted somewhat loosely and often the “P” is found under the initials of the inspector instead of above them. Additionally, the initials are often found on the side of the cylinder, rather than the face. This may have something to do with the ease of cylinder removal from the revolver (the cylinder of a Savage Navy can be particularly difficult remove, while the cylinder of a Whitney Navy is rather easy to take out of the frame). The two primary re-inspectors of Colt revolvers were Commanders Guert Gansevoort (G.G.) and John R. Goldsborough (J.R.G.). In the case of this cylinder, it was re-inspected as a percussion revolver, circa 1865 by Commander Goldsborough. As with many of the Colt Navy-Navy revolvers that were converted by Colt, the cylinder is mismatched, and the last four digits of the number on the side of the cylinder read 2438, and not 8725 as it would if it matched. Based on the known serial number ranges of the Colt Navy-Navy contract revolvers, this cylinder almost certainly started life in gun number 62438, which would have been about the last of the 1st contract US Navy Colt M-1851 revolvers to be delivered. These cylinders were sometimes re-numbered below the original number on the side of the cylinder and were sometimes numbered with the last 3 or 4 digits of the serial number on the rear face of the cylinder during the alteration process. This one is numbered on the rear face in two, two-number groups, 87 and 25, between two of the chambers, matching it to the last four numbers found on the balance of the gun. The rear face of the cylinder also bears a single H inspection mark. The loading gate is marked with the assembly number 970, and there is no doubt if the conversion ring were removed from the breech face of the revolver that it would also be marked 970. This same assembly number is found on the cylinder arbor as well. These numbers were Colt factory internal assembly marks for the conversion process and were not meant to match the serial numbers of the guns they were applied to. The bottom of the barrel is not stamped with the R.W.M. (ANCHOR) inspection mark, so we know the gun was not sent to the New York Navy Yard after it was converted by Colt, but it could have gone to any number of other US Navy installations. An August 12, 1873 letter from Commander Jeffers to Colt asked that when the first 100 revolvers were altered that 50 be sent to the New York Navy Yard and 50 to Portsmouth. No doubt Colt delivered the guns to the various navy yards as needed, and at Jeffers’ direction.

The gun is in VERY GOOD+ condition and remains very crisp and sharp throughout, with good edges and clear markings. The pistol retains essentially none of its original Colt factory refurbished blued finish, but does show some traces of blue in the protected areas along the edges of the ejector housing. The balance of the gun has a mostly smooth pewter gray patina with speckled age discoloration and freckles of minor surface oxidation giving the gun a mottled appearance. The case hardened frame has a slightly duller pewter gray patina, with a more even, darker gray mottling present. The hammer retains some minor traces of its mottled case hardened finish. The metal surfaces are mostly smooth, with some scattered patches of light pinpricking, mostly on the barrel, giving it a sort of “salt & pepper” appearance. There are also some areas of light surface oxidation around the muzzle, and scattered on the barrel. The cylinder retains about 25%+ of the roll engraved Mexican War naval battle scene, and has a similar pewter gray patina to the rest of the gun. The loading gate retains some minor, faded traces of its original case hardened finish on the interior and is numbered 790, matching it to the Type III Richards conversion ring at the rear of the cylinder. The ring is numbered on its back, but the cylinder arbor (which is also numbered 790) must be removed to remove the ring and check the number. It certainly matches the loading gate. These parts were assembly numbered together during the manufacturing process and were never numbered to the guns that they were installed in. The gate uses the less commonly encountered “outside” spring to secure it (most Richards-Mason alterations use an “inside spring”), and the spring retains about 20% of its original niter blued finish, which has faded and duller. The gate functions smoothly and correctly. The action of the pistol is EXCELLENT and the revolver remains extremely tight, timing and indexing perfectly and locking up exactly as it should. The trigger retains about 20% of its original niter blued finish, with much fading and dulling, and functions crisply as well. The iron backstrap and triggerguard have the same mottled pewter gray patina as the rest of the gun. The ejector rod button is of the correct kidney shaped pattern with the concentric rings, and functions smoothly and correctly as well. The gun appears to retain all of its original screws as well, which are in very nice condition and show minimal slot wear. The screws all retain strong traces of their niter-blued finish, although they have faded and dulled with age. The bore of the pistol rates about FINE, and remains relatively bright with crisp rifling and only some lightly scattered pitting along its length. The one-piece, oil finished, black walnut grips are in VERY GOOD+ to NEAR FINE condition, and are free of any breaks, cracks or repairs. However, the grips do show the expected bumps, dings and handling marks from use and service. Amazingly, the grips are ink numbered to the revolver in a period hand with the full serial number 58725. The majority of Navy-Navy conversion revolvers encountered today are wearing grips that were replaced during refurbishing at Colt. Finding a gun with its original, pre-Civil War grips is a real rarity. As would be expected, the grips fit the gripstrap and frame very well, although the backstrap is very slightly proud of the wood. The grips show wear commensurate with the condition of the balance of the revolver, but also remain as crisp and sharp as the metal is.

Overall this is a really lovely, 100% original, complete and correct Colt M-1851 Richards-Mason Converted Navy-Navy. These are very scarce guns, with only about 1,000 so altered. This gun has a really wonderful look and has not been messed with in any way. It is in much better condition than most Navy purchased M-1851 conversions encountered, and it would be hard to imagine finding a conversion with crisper and clearer inspector markings from its percussion service. This is one of those guns that had a service life of well over 3 decades, serving the United States Navy in the years leading up to the Civil War, during the war and then being converted in 1873 to serve more than another decade until the M-1889 Colt Navy double action .38 revolver was taken into service. With all of that service and use it is amazing the gun is as crisp as it is. A Colt Navy-Navy is a real coup for any serious collector of US marital revolvers to acquire, and a Richards-Mason conversion is even harder to find. This gun would be a great addition to any such collection or to a Civil War or US Navy collection. This is simply a great gun that you will be very proud to own and to display, and at a very reasonable price.