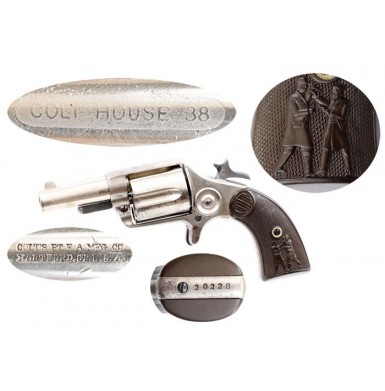 In 1880 Colt introduced a new, upgraded version of its House (Cloverleaf) pattern revolver. The aptly named “New House” revolver was essentially an upsized version of the Colt New Line revolvers currently in production, with a larger frame and a larger grip with a square butt profile. Like the New Line revolvers, the New House series remained solid frame single action revolvers with spur triggers that were essentially intended for pocket carry. Unlike the New Line guns, the New House guns were only made in a single frame size, regardless of caliber. The majority of the revolvers were produced in .38 Colt, accepting either the long or short versions of the cartridge, but they were also produced in .41 Colt and a few were manufactured in .32 Colt. The guns had five shot cylinders that were of the same configuration as the Second Model New Line revolvers, with long flutes and the cylinder stop slots cut on the rear face of the cylinder. The revolvers had five shot cylinders and a 2 ““ long round barrel without an ejector was standard. However, various factory barrel lengths could be ordered with the longest option being a full 10”! As with the New Line revolvers, the standard finish was nickel plating with high luster nitre blued hammer and trigger surfaces and screws. However, blued barrels with case hardened frames were available as well as custom finishes including gold and silver washes. Standard grips were two-piece varnished or plain walnut, rosewood, or checkered hard rubber. However, as with nearly all Colt revolvers of the era, other exotic materials like ebony, mother of pearl and ivory were available for an extra charge on a custom order basis. One significant upgrade from the Colt New Line revolver was the inclusion of a loading gate in the New House revolver design. New House revolvers, like the New Line guns, did not include an ejector rod. One sub-variant of the New House series did include an ejector rod on those guns with barrels of 4 “, 5” or 6”. This was the New Police revolver. The other distinguishing characteristic of the New Police model were the checkered hard rubber grips that were embossed with a “Cop & Thug” motif, showing a police officer confronting an armed “thug”. This embossed image is the one that gives this model its collector moniker, the “Cop & Thug” revolver. About 4,000 New House revolvers were produced between 1880 and 1886, with the serial numbers running concurrently with the New Line .32, .38 and .41 caliber pistols as well as the New Police revolvers. Between 3,500 and 4,000 New Police revolvers were produced during a slightly shorter time frame, from 1882 through 1886. Like the majority of the New Line revolvers, the New House and New Police revolvers were typically etched on the barrel with their caliber, although later production guns (usually above serial number 22,000) were stamped, rather than etched. The New House and Police revolvers were popular in England and it is not uncommon to find them with British proof marks and sometimes with Colt’s London, Pall Mall address on the barrel, rather than the more common Hartford barrel address. Much like the fate of the New Line series of revolver it was the double action Colt 1877 handguns that brought production of New House and New Police revolvers to an end. The newer lock work provided a better and safer revolver for pocket carry than the older spur trigger, single action system of the New House series of firearms.

Offered here is a NEAR EXCELLENT condition example of a very desirable Colt “Cop & Thug” Revolver. The wonderful condition “Cop & Thug” motif hard rubber grips are what set this model apart from other New House revolvers. While many “Cop & Thug” handguns are marked with a “New Police” barrel etching, this one carries the standard House model marking and reads COLT HOUSE 38. As indicated by the marking the revolver is chambered for the .38 Colt (Long or Short) centerfire cartridge. The top of the 2 ““ long, ejector-less round barrel is clearly roll marked in two lines: COLT’s PT.F.A. CO / HARTFORD, CT. U.S.A.. The serial number 20228 is stamped on the bottom of the grip frame, and the last three digits 228 are stamped on the rear face of the cylinder between three of the chambers. The left grip panel is numbered 0228 in pencil in a period hand on its interior surface. This serial number places the manufacture of this gun at the very beginning of 1885, the next to last year of production. This particular revolver shows alternating (CROWN) / V and (CROWN / GPBritish proof marks in the cylinder flutes, indicating it was one of the many Colt New House (New Police) revolvers sold to Great Britain. As noted above, the revolver is in about NEAR EXCELLENTcondition. It retains about 80%+ of its original nickeled finish overall. The barrel retains about 85%+ original nickel, with only some minor high edge loss, especially around the muzzle and some small patches of minor flaking and wear, mostly on the right side of the barrel near the muzzle. The frame retains bout 85%+ finish as well, but does show some scattered freckles of minor surface oxidation, and a few tiny patches of moderate discoloration and light surface roughness. The frame also shows some minor scuffs and scrapes from carry and use. The cylinder retains slightly less nickel than the frame and retains about 80%+ of its finish, with some small patches of light flaking, and some thinning, scuffing and wear around the entire cylinder. The nickel has a nice, medium bright appearance and has the polished look that approximates the level brilliance the revolver probably had when new. The areas where the nickel has flaked and worn have developed a slightly crusty brown patina. The metal is almost entirely smooth and free of any significant pitting, although there is some very lightly scattered pinpricking present. All markings in the metal are crisp, sharp and fully legible, including the barrel etching and the barrel address. The lower rear of the left side of the frame bears the Colt inspector mark A and another Colt inspector mark J is found under the barrel, concealed by the cylinder arbor pin. The top side of the hammer retains the majority of its original brilliant niter blued finish, with the sides showing a lightly oxidized, mottled brown and gray appearance. The niter blued trigger retains slightly less of its original vibrant blued finish as well, and has dulled and faded so that it is no longer as vibrant as the hammer. The screws all retain the majority of their niter blued finish as well, but show somewhat more dulling and fading than the trigger. The screws remain very crisp showing minimal slot wear. The blued cylinder arbor pin has faded somewhat but still retains the majority of its finish and the knurling remains crisp and sharp, showing minimal wear. The bore of the revolver is in about FINE overall condition and is mostly bright with crisp rifling, showing only some minor pinpricking along its length and some light pitting near the muzzle. The original front sight is in place on the barrel and remains in fine condition as well. The revolver is mechanically EXCELLENT and functions correctly on all positions. The revolver indexes, times and locks up exactly as it should. The two-piece checkered and embossed hard rubber grips are in VERY FINE+ condition as well, and as noted they are correctly numbered to the revolver. The grips have a wonderful chocolate color to them, typical of 19th century Colt hard rubber grips that have had some exposure to light over the decades. The upper portion of the grips have the name COLT embossed in an oval, while the lower part have their famous "Cop & Thug" motif. The grips are solid, complete and are free of any breaks, cracks or repairs. The grips show some minor surface scuffs and some light bumps and dings from carry, use and storage, but show no signs of abuse. The checkering remains mostly crisp and the “Cop & Thug” motif remains very crisp, clear and well defined. The desirability of this model of Colt really hinges on the quality and condition of the grips and these grips do not disappoint in any way.

Overall, this is a wonderfully crisp example of the most desirable of the Colt New House (Police) Revolvers, those with the wonderful “Cop & Thug” grips. The gun is 100% complete, correct and original and retains the nearly all of its original nickel finish along with wonderfully bright niter blue on the hammer and trigger. With less than 4,000 of these midsized pocket revolvers manufactured over the five-year period form 18882-1886, these guns can be difficult to find. When they are located the hard rubber grips are often well worn, chipped or cracked. These grips are simply wonderful and are everything you would want to find in a high condition Cop & Thug revolver. This is a great example that is worthy of being added an advanced collection of 19th century Colt cartridge revolvers, and is a gun that I am sure you will be very proud to own and display.