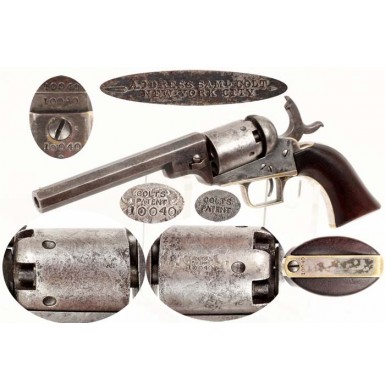 This Colt M-1848 Pocket Model aka Baby Dragoon is in VERY GOOD+ to NEAR FINE condition. The gun is 100% complete, correct and original, and has all matching serial numbers. The serial number and the features of the revolver classify it as a “First Transition” model Baby Dragoon, according to Colt researcher, collector and author Sam Pachanian (see the American Society of Arms Collectors Bulletin #59 “ Fall 1988). These “First Transition” guns are found in the approximate serial number range of 6,300 to 10,900 and introduces the oval cylinder stop slots, introduces dashed finials at the beginning and end of the barrel address, and the address can be found in both orientations, either right or left handed. These transitional guns also have a smaller amount of upward angle acclivity between the grip and barrel than earlier “Baby Dragoon” models. The revolver is in crisp, original condition with clear markings throughout. The serial number 10040 is clearly stamped on the bottom of the barrel lug, on the bottom of the frame, on the bottom of the triggerguard, the bottom of the grip strap, on the side of the cylinder and on the bottom of the barrel wedge. The same serial number is also present, written in pencil, in the backstrap cutout of the one-piece walnut grip, but is barely visible and needs both light and magnification to be seen. The left side of the frame is clearly marked in two lines: COLTS / PATENT and the cylinder is marked in three lines: COLTS / PATENT / 10040. The 5” octagon barrel is marked in two lines, flanked by a pair of dashed finials: ADDRESS SAML COLT / NEW-YORK CITY. The address is in the “Left Hand” orientation, and reads from the frame towards the muzzle, rather than the more typical “Right Hand” orientation that reads from the muzzle to the frame. The revolver is in a very nice state of preservation for a Baby Dragoon, and retains about 10%-15% of its original finish overall. The barrel retains about 25%+ original blued, which has faded, worn and dulled, and mixed with a plum-brown patina. There are flecks of brown surface oxidation scattered along the barrel, mixed with the flecks and patches of original dulled blue. The blue is strongest on both sides of the barrel web near the frame, and along the upper three flats and left flat of the octagon barrel. The barrel is mostly smooth, but does show some scattered areas of oxidized surface roughness and scattered pinpricking along its entire length. The bore of the revolver is in about VERY GOOD condition, and is mostly bright with strong rifling present its entire length. The bore shows light to moderate pitting scattered along its entire length as well, and a good scrubbing might improve its overall condition. The cylinder retains about 40% of its “Ranger & Indian Fight Scene”, and has a medium pewter gray patina with a thin plum brown haze of oxidation forming, and scattered patches of darker oxidized discoloration and minor surface etching present. These areas of black oxidation and minor pitting are most prevalent around the front of the cylinder near the chamber mouths and around the percussion cone recesses. The cones (nipples) are all original and shows moderate wear as well as the expected moderate pitting and oxidation from use in their recesses. The original single safety pin is in tact on the rear face of the cylinder and is still quite usable. This is very rarely the case and this single pin is almost always worn away or broken. The frame of the revolver shows some traces of original case coloring and has a mottled grayish-blue patina, with some darker patches of minor surface oxidation mixed with traces of bluish and purplish traces of case color. The hammer retains similar traces of case color, with some darker mottling over a pewter gray base color. The action of the pistol is in EXCELLENT condition and it functions crisply and correctly on all positions. The revolver indexes, times and locks up exactly as it should and is mechanically perfect. The brass backstrap, gripstrap and triggerguard all retain some of their original silver plating, with the amounts varying from traces to maybe 30% in some areas, giving the plating a rating of about 15% overall. Much of the remaining silver has tarnished to a darker gray color with streaks of black. The screw heads all remain in very nice condition, with only some light slot wear present on a couple of the screws. The one-piece walnut grip remains in about VERY GOOD condition. The grip is solid and complete and is free of any breaks, cracks or repairs. The grip does not appear to retain any of its original varnish, but that is typical of a Baby Dragoon that was carried a lot and saw some moderate use. The grips show some minor bumps, dings and handling marks, and have some light wear at the sharp leading edges, but show no abuse or any real damage.

Overall this is a very nice example of an 1849 production Colt 1848 Pocket Model aka “Baby Dragoon”. The gun is much nicer than most of the examples encountered today and has not been cleaned to death or had the cylinder scene polished completely off it. The revolver is all matching, including the wedge and retains some nice original blue on the barrel and some traces of color on the frame. The gun is 100% complete and correct and shows all the indications of real world carry and use, with no abuse or modifications during its lifetime. This is one of those guns that you wish could talk as it was produced during the Gold Rush of 1849 and could well have traveled west with an owner searching for his fortune. Clearly the revolver was fired quite a bit during its life, which is why there is pitting and wear around the cones (nipples) and why there is flash erosion and etching on the cylinder and in the bore. Even though the gun saw at least moderate use, it was clearly well cared for and may well have helped its owner escape a close call or two. This would be a wonderful addition to your collection of Colt revolvers, as this is a crisp, well-marked and “no excuses’ example of the desirable “Baby Dragoon”. I am quite sure that you will be glad to add this very nice “Baby” to your collection of 19th century percussion revolvers and will be very proud to display it.