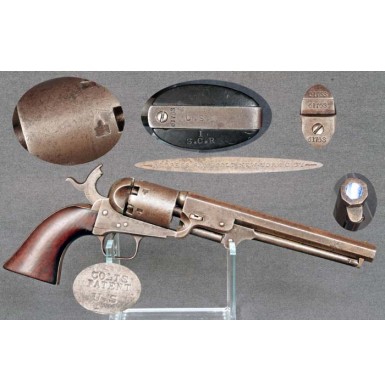 This is a VERY GOOD example of a US Navy inspected Colt M-1851 Navy revolver. The number of Colt’s .36 caliber M-1851 “Navy” revolvers purchased by the US Navy was rather limited. While Colt had vigorously lobbied the Navy to purchase his revolving pistols during the early 1850’s, he met with significant resistance. He did manage to secure an order for 100 revolvers in June of 1852 for the use of Commander Perry’s command on his voyage to Japan. However, the general belief of the Naval Ordnance Department was that pistols were only of use while boarding an enemy ship, and in those circumstances edged weapons such as sabers or axes were of more use to the typical seaman. In fact the chief of Naval Ordnance, Commodore Morris wrote to Secretary of the Navy James Dobbin on June 21, 1854, noting in part:

This Colt M-1851 Navy-Navy revolver is part of the original order for 2,000 guns and was delivered to the New York Navy Yard in December of 1857. The revolver has the matching serial number 61763 on all of the major parts, with the loading lever and the barrel wedge having the matching number 1763, omitting the first digit. Like all of the Colt M-1851’s delivered under this USN contract, the revolver has a London style iron backstrap and a large London style iron triggerguard. The lower front portion of the left side of the frame is marked in three lines: COLT’s / PATENT / U. S.. The octagon barrel is marked with the single line New York barrel address that reads: “ ADDRESS SAML COLT NEW YORK CITY”. The bottom of the iron gripstrap is clearly marked: U * S * N and the bottom of the wooden grips are marked: I / S * C * R, indicating inspection by Commander Stephen C Rowan at the New York Naval Yard. The gun remains very crisp and sharp throughout, with good edges on the octagon barrel and crisp, clear markings in the metal and the wood. The pistol retains some minor traces of its original blued finish on the barrel, mostly in protected areas, which has blended with a smooth plum brown patina over the balance of the barrel. The frame retains traces of the original case hardened finish, which has faded to a medium gray brown with some lightly oxidized salt and pepper discoloration. The metal surfaces are mostly smooth, with scattered patches of light peppering and pinpricking over the entire gun. There are some areas of slightly heavier pinpricking and some light pitting on the barrel, forward of the cylinder and on the front portions of the frame. There is also a dime sized patch of light pitting on the right side of the barrel, near the muzzle. The cylinder retains about 60%+ of the roll engraved Mexican War naval battle scene. The cylinder retains all of its original cones (nipples), in good and serviceable condition. The loading lever retains some strong traces of its original case hardened finish in the protected areas, which has blended with a smooth plum brown patina, matching the gun well. The gun appears to retain all of its original screws, which are in very nice condition and show minimal slot wear. The pistol is mechanically excellent and functions very well. The gun indexes, times, and locks up exactly as it should. The bore of the pistol rates about VERY GOOD as well, and remains relatively bright with crisp rifling and light scattered pitting along its entire length. The one-piece, oil finished, black walnut grips are in VERY GOOD+ condition, and are free of any breaks, cracks or repairs. The grips do show some handling marks from use and a couple of minor dings and tiny surface chips.

Overall this is a really lovely, 100% complete and correct, all matching Colt M-1851 Navy-Navy. These are very scarce guns, with only 2,600 marked and naval accepted guns being procured. Considering that Colt produced over 215,000 of the M-1851 revolvers in Hartford, these USN marked M-1851 Navy revolvers represent only 1% of the total production. This gun has a wonderful look and has not been messed with in any way. It is in much better condition than most Navy purchased M-1851’s encountered, and it would be hard to imagine finding one with crisper and clearer inspector markings. All of the Navy purchased revolvers saw use on board ships, and considering the harsh environment they were exposed to, this gun is in really great shape. A Colt Navy-Navy is a real coup for any serious collector of US marital percussion revolvers to acquire. This gun would be a great addition to any such collection or to a Civil War USN collection. This is simply a great gun that you will be very proud to own and to display.