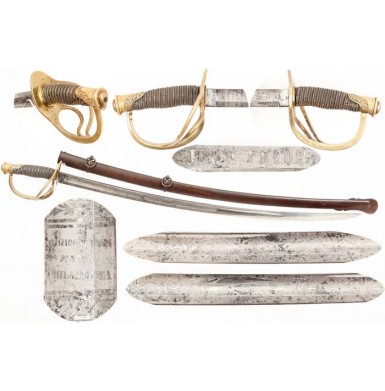 This is a lovely example of a relatively scarce US M-1840 “Short Blade” Cavalry Officer’s Saber by the famous Philadelphia military goods dealer W.H. Horstmann & Sons. William H Horstmann established his military goods company in Philadelphia sometime in the mid-1820s, after immigrating to the United States from the German Confederation of States in 1816. According to work done by sword collector, researcher and author John H Thillmann, Horstmann’s first sabers offered for sale were imported from Hamburg in 1827. In his very detailed and well researched work Civil War Cavalry & Artillery Sabers, Thillmann lists Horstmann’s company as a sword “assembler” and not a manufacturer. It appears that Horstmann relied upon blades provided by other makers, sometimes even complete swords, and would assemble the swords in house, using a combination of guards, hilts and mounts of his own manufacture as well as sword parts obtained from outside sources. Horstmann also used scabbards of foreign manufacture as well as scabbards that he made himself. Even his etched blade officer’s swords appear to be a combination of blades that were purchased and etched in Philadelphia (either in house or by contract work), and those that were etched by the blade makers in Solingen, which was his primary source for blades. During the years leading up to the Civil War, Horstmann offered a wide variety of US regulation patterns swords for sale, as well as all the usual uniforms, accouterments and accessories necessary for any military man. Horstmann offered these items not only to US military officers, who had to provide their own uniforms and equipment, but also to various state and local militia units who were not equipped by the US government. With the coming of the American Civil War, Horstmann obtained his first large swords contracts, and by the end of the war would deliver some 25,188 sabers to the US Government. The large majority of these were assembled with Solingen made blades, and some were probably manufactured in their entirety in Solingen. Horstmann even obtained at least 5,000 blades from Emerson & Silver of New Jersey, which prompted Emerson to complain that it was unfair that a “sword assembler” could get a contract to provide sabers to the government, but that Emerson & Silver could not, even though they produced their own complete sabers! Horstmann produced officer’s pattern sabers during the Civil War as well, based upon both the M-1840 Heavy Cavalry Saber and the M-1860 Light Cavalry saber. Mr. Thillmann identifies at least 3 primary variations of the M-1840 Cavalry Officer’s Saber and 2 of the M-1860 Cavalry Officer’s Saber that were produced in what he call “field grade”. These were officer’s sabers that were embellished and more decorative versions of the enlisted sabers, but were still real fighting weapons without excessive ornamentation and not of “presentation grade”. Horstmann’s “field grade” M-1840 officer’s sabers were divided between three basic versions, a “long blade” (about 35 “) saber and two “short blade” (about 31 “) sabers. The primary difference between the “short blade” sabers was the presence or lack of etching. Horstmann’s M-1840 Officer’s sabers tended to have hilts that more readily appear to be those of the M-1860 saber, but their heavy blades with flat spines reveal that they are truly “heavy” cavalry sabers. These swords are almost certainly examples that were assembled by Horstmann, as the quality of the blades and etching, as well as the grip and pommel cap are usually much higher than the quality of the guard. This suggests the use of multiple contractors as the source of parts, and may indicate that the guards were something the company was making in-house.

Overall this is a really attractive, 100% complete and original example of a fairly scarce WH Horstmann & Sons “Short Blade” M-1840 Cavalry Officer’s Saber. The blade etching is very high quality and nearly 100% present and complete, and the blade remains much of its original bight polish. The flecks of minor surface oxidation and age staining shown in the photos are not nearly as obvious as the pictures make them look, and the saber is really much more attractive in person than the photos lead you to believe. This would be a wonderful addition to any Civil War saber collection or a display of cavalry officer items. I have seen these sabers priced well above $2,500 recently, but his one is much more reasonably priced and will be a wonderful addition to your collection of Civil War arms.