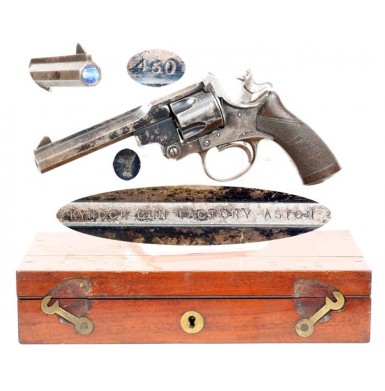 Offered here is a FINE condition example of what collectors refer to as a Tranter-Kynoch revolver, which is in reality a Tranter M-1879 Revolver produced by the Kynoch Gun Factory sometime around 1885 (or slightly after), when they took over the Tranter facility as well as his remaining parts on hand. The gun bears no Tranter markings, and the top rib of the 4 15/16” long octagonal barrel is simply marked: KYNOCH GUN FACTORY. The other markings on the gun are the caliber mark .450 on the barrel, assembly (or serial) number 7, the usual Birmingham commercial proof marks and two different sets of small letter markings. The serial number is found on the bottom of the barrel and on the rear face of the cylinder. It is likely on some internal components as well. The proofs are found on the right side of the frame below the hinge, on the left angled flat of the barrel between the top strap and the caliber mark, and at the rear of the cylinder flutes. The letters O.C are stamped on the top strap and two letters are stamped on the lower left side of the frame near the grip junction. These letters are double-stamped or over-stamped and I can’t quite decipher them. The revolver has some simple engraved enhancements, including a flower motif around the hammer screw on both sides of the frame, a similar (but simpler) motif on the release latch and the grip screw heads. Simple boarder line engraving is found around the edges of the frame below and behind the cylinder, as well as on the trigger guard bow, with slightly more complex border engraving around the muzzle. The revolver is blued with the hammer and frame release left in the white and checkered one piece walnut grips. The double action trigger mechanism has the exposed sear release at the rear of the triggerguard found on 4th Model Tranter revolvers, and is likely the same basic double action mechanism used by Tranter from the early 1860s. One of the features Tranter incorporated into the Model 1879 was a rebounding hammer, and this revolver retains that feature even though it is made by Kynoch. The revolver retains about 25%+ of the original blued finish, which is most evident on the left side of the frame, forward of the cylinder, on the rear portion of the barrel and in the cylinder flutes. The finish appears to have primarily flaked away. The balance of the revolver has a mostly smooth, mottled brownish-gray patina with traces of plum. The metal shows no real pitting, but there is some very lightly scattered pinpricking and some minor surface oxidation present. The revolver is mechanically functional and times, indexes and locks up as it should. The latch system remains tight and secure with only the usual minor end shake typical of hinged frame designs. The extractor star functions smoothly, but does not “snap” down at the end of the barrel travel like Smith & Wesson style designs and my research could not conclude if it is supposed to. It appears that like some English simultaneous extraction systems, it was only designed to lift the cartridges from the chambers, with the loaded rounds being long enough to still be partially in the chamber and only the fired ones being short enough to be completely extracted. The lever on the front of the frame allows the extraction system to be defeated and the cylinder to be removed from the revolver. The bore of the revolver is in about FINE condition as well. It is mostly bright with crisp nine-groove rifling. There is some minor oxidation and fine pitting present in the grooves. The one-piece wood grip remains in about very good condition. It is solid and complete and free of any breaks, cracks or repairs. The grip shows the usual bumps and dings from handling and use and checkering shows light to moderate wear. The revolver is contained in its original Tranter style mahogany casing with its original green baize lining, which remains in FINE condition. The casing has a section with 25 holes for the storage of 25 .450 cartridges, as well as a triangular lidded compartment and several compartments for the storage of various accessories, all of which are empty. The case retains its two original brass locking hasps, both original brass “bible” hinges, an unmarked round brass escutcheon on the lid and a brass lock plate. There is no key. The case is in about VERY GOOD+ to NEAR FINE condition, and retains much of its original finish with the usual minor bumps and dings from handling and use. The only condition issue worth mentioning is the grain crack that runs the width of the lid. This is solid and stable, but does not materially detract from the display of the revolver and casing. No retailer label is present in the case, and it does not appear that there every was one.

Overall this is a very nice example of a scare, late Tranter cartridge revolver produced by the famous Kynoch Gun Company, a short-time subsidiary of the even more famous Kynoch ammunition company. The Kynoch Gun Company was only in business from 1885 to 1888, when George Kynoch retired and the company became the Aston Arms Factory, under the direction of Kynoch’s former superintendent Henry Schuland. This business was short lived as well, closing in 1891. As these revolvers were produced for such a short period of time in rather small numbers they are difficult to find on the collector’s market today. This would be a wonderful addition to any advanced collection of early British cartridge revolvers, and particularly a collection of Tranter revolvers, as it represents the last of the Tranter designs to be produced.