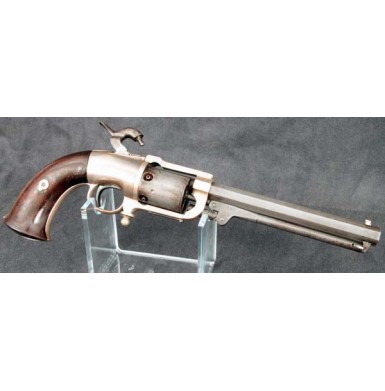 This is a NEAR FINE example of one of the least often encountered Civil War era percussion revolvers. The Butterfield Army revolver was a 5-shot, .41 caliber, single action revolver that had a unique automatic priming system built into it. Jesse Butterfield’s patented priming pellets were inserted into a spring loaded feeding tube that screwed into the bottom of the frame of the revolver, just in front of the trigger guard. The tube would push a primer up against a feeder bar that would push a primer out onto the percussion cone each time the hammer was released by the trigger. This kept the primers safely inside the frame of the pistol until the trigger was pulled. The mechanism was quite similar to the sliding primer bar system that feeds primers into a progressive reloading press today. Jesse Butterfield of Philadelphia received a patent for his revolver design on December 11, 1855. Although he initially received a contract in 1861 to produce just under 2,300 of the guns for the Ira Harris Guards of New York state, the contract was cancelled for some unknown reason and Butterfield only produced 640 of the revolvers. The Ira Harris Guards were eventually re-designated as the 5th & 6th New York Volunteer infantry regiments. It is unclear whether any of the guns were actually issued to them, but there is some evidence that at least some members of the 5th NY purchased the revolvers privately. There is also evidence that some of the guns were sold in 1861 in the Carolinas, so potential Confederate usage cannot be ruled out. Either way, the revolver has always been considered a secondary martial revolver of the Civil War era. The majority of the limited production run of these guns were marked on the brass top-strap with the Butterfield patent information and address, as well as with serial numbers on nearly all of the components, both internal and external. The last 50 or so produced were completely unmarked.

This is one of the standard production revolvers from the initial run of 590 pistols. The top of the brass frame is clearly marked in three lines: BUTTERFIELD / PATENT Dec 11, 1855 / PHILLADA. The pistol is marked with the serial number 299 on all of the major and minor components, except for the cylinder, which is marked 204 on its rear. The serial number also appears on nearly every internal part as well, including the interior of the side plates. The cylinder appears to have been with the revolver for its entire lifetime, and mismatched Butterfield’s are not uncommon “ it appears that some of the major components were sometimes mixed up at the factory. The very low number of revolvers produced makes it very unlikely that a spare cylinder could be located and put with the revolver. The overall condition of the revolver is about FINE. The brass frame is in very VERY FINE condition and retains about 30%-40% of the original silver plated finish, with significant thinning and loss. The balance of the frame is covered with an absolutely gorgeous, untouched bronze patina that blends well with the thinning silver plating. The barrel and cylinder have a truly attractive smooth dove gray patina, with some age staining present on the iron. The barrel retains sharp edges and smooth metal, with only a couple of small patches of very light peppering and mild roughness. The cylinder shows some scattered patches of heavier peppering and pinpricking, as well as some scattered light pitting. The cylinder has the same dove gray patina as the barrel, and shows the same ages staining and discoloration, in patches “ mostly around the areas that show some light pitting. The hammer and loading lever retain some light traces of mottling from their original case hardened finish, mixed with a smooth silvery patina. The action works well, and the revolver still locks up and times correctly. This is rare for Butterfields, as their actions were not only fragile, but somewhat finicky and most found today have mechanical issues. The screws all appear to be original and the heads for the most part are unmarred and show only normal wear. The original primer feed tube is present, and in nearly perfect condition. It retains the original coil spring, follower and all internal parts. The tube would surely feed primers today, were they available. The primer feed bar that pushes the primer discs from the feed tube out onto the cones (nipples) is present and functions perfectly. This part is rarely encountered in Butterfield revolvers today, as it was such a small fragile part of the complicated mechanism. It is very nice to find it complete and functional in this revolver and is really a treat. The cylinder retains all of the original cones (nipples), and they are in very good and relatively unbuttered condition The oddly shaped wood grips, with their uniquely flared bottoms are in VERY FINE to NEAR EXCELLENT condition, with no repairs, and they retain about 80%+ of their original varnished finish. There are a few minor rubs and dings over the grips. The grips do not show the significant damage that is common due to their strange shape with weak corners. There is a minor surface crack on the upper portion of the left grip that is with the grain and does not appear to be structural. This one minor imperfection remains solid and tight with no sign of weakness. These may be the best set of grips that I have ever encountered on a Butterfield revolver. The revolver’s serial number, 299 is crisply stamped into the bottom of each grip panel.

This is one of those revolvers that even a truly advanced Civil War era handgun collection is typically missing. With so few of them produced during the 1861-1862 production run, it is not often that one of these revolvers is found for sale. When they are found for sale they often exhibit significant condition issues and are still nearly always priced in excess of $5,000 (I saw one at a show recently for over $12K!). This gun is in FINEcondition, with a complex and fragile action that still works correctly and is 100% complete and correct. The often missing or damaged primer feed tube is present and in fine condition, as is the primer feed arm. When you combine he excellent mechanical condition of the revolver, the fully functional and present primer feed arm and the fantastic grips, you really have a gun that is head and shoulders above most of the others typically encountered for sale. Even though the gun does not retain sufficient finish to technically rate “fine”, the mechanical condition and grip conditions more than make up for a loss of blue over the years. The revolver simply has wonderful eye appeal and is a really crisp example. This is a great opportunity to add a very scarce revolver to you collection and for a very reasonable price, and it is a gun that you will not need to make any apologies for.