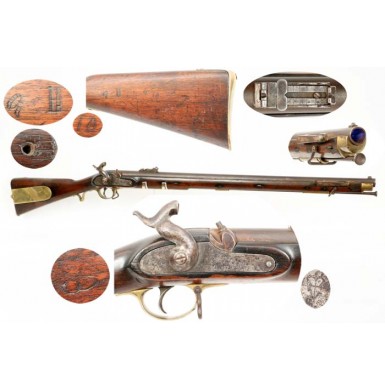 In 1836 the British military officially adopted the percussion cap to replace flint as the ignition system for small arms, although it would be 1839 before a new infantry musket using the percussion system would be officially approved and start to be issued in any quantity. With the theoretical acceptance of the new ignition system, George Lovell, inspector of small arms at Enfield (the British government armory), proceeded to start the process of designing a new percussion musket and rifle. His initial success was in a back-action percussion lock that was utilized on his short-lived Pattern 1838 musket, but saw significant service with the newly designed P-1837 Brunswick Rifle. The Brunswick was a significant technological improvement over the Baker Rifle that had seen use in the British rifle brigades and battalions for the previous three decades. The Baker was a flintlock rifle with a slow twist 7-groove barrel. The rifling design had been selected not so much for accuracy, but for its ability to see significant use without becoming too fouled to load. In fact the accuracy (or rather inaccuracy) of the rifle was such that during the last years of production the multi-leaf rear sight was abandoned for a fixed sight, with the Board of Ordnance feeling that the adjustable sight was unnecessary for the rifle or the rifleman! Lovell experimented with a variety of rifling systems for what would become the new Brunswick rifle, and finally settled upon a 2-groove bore of .704 caliber that used a belted ball to insure a tight mechanical fit between the ball and rifling. The new rifle resembled the older Baker in that it did not employ barrel bands, but rather had a key fastened stock and had a heavy bar on the right side of the barrel for the mounting of a saber bayonet. The first version of the Brunswick, the Pattern 1837 had Lovell’s back action lock, a fixed sight with additional leaves for longer range shooting, and a hook breech. The gun went into production in 1838, with the first rifles reaching troops in the field around 1840. In 1841 an improved version was adopted with a conventional side lock and the hooked breech was eliminated. These P-1841 rifles went into production around 1844 and were in the field the following year, and most collectors refer to the improved Brunswick as the Pattern 1844. The final change came in 1847, when Lacy & Reynolds, a London arms contractor, introduced an improvement to the bayonet mounting bar. Once the new improvement was officially adopted, the final version, the Pattern 1848 came into being. The Brunswick Rifle remained a standard issue long arm for rifle troops until about 1853, when sufficient quantities of the new Pattern 1851 Mini” Rifles had been produced and could be issued, effectively turning all British infantrymen into “riflemen”. Even after the adoption of the small-bore .577 caliber P-1853 “Enfield”, the Brunswick remained in a secondary issue roll, particularly among native and colonial troops, through the mid-1860s.

With the adoption of the Pattern 1853 Enfield, the Brunswick rifle, along with the Pattern 1839 and 1842 muskets and the Pattern 1851 Mini” Rifle all became obsolete and essentially worthless arms in British military inventories. Some of these arms were sold off to the fledgling Confederacy during 1861 and 1862, as southern purchasing agents were looking to obtain small arms of any type to equip the newly formed Confederate armies that were then taking the field against the US military. According to the Gorgas Summary of Small Arms Purchases made by Caleb Huse, some 2,020 “Brunswick Rifles” were purchased by the south at a cost of 54 schillings each. This summary report was dated February 3, 1863, and most likely covered the purchases made by Huse between the time he arrived in England during the summer of 1861 and the end of 1862. Huse acquired all of the Brunswick Rifles from S. Isaac, Campbell & Company, who purchased the guns from J.E. Barnett & Son of London. The guns were acquired in 8 lots between October 31, 1861 and March 27, 1862. To date nine examples of these Confederate purchased Brunswick Rifles are known, all bearing the CH/1 inspection mark Curtis & Hughes, who acted as viewers for Confederate arms purchases in England, usually of guns sold by Barnett. These nine examples vary in features and caliber, with some being .704 2-groove military rifles (both 1837 and 1844 patterns) and some being smaller bore volunteer models. In all cases, even the surplus military guns have been upgraded with the addition Pattern 1856 short rifle rear sights. The Volunteer pattern, smaller bore guns have stamped inventory numbers, and the extant examples range from #207 through #1065. This suggests that Barnett may have produced these guns, or built them from a variety of scavenged military parts and newly made parts, as Pattern 1853 type locks and newly made .63 barrels have been encountered on some of these guns. The Brunswick rifles documented in the Gorgas summary were shipped to the south in the cargos of the blockade runners Gladiator, Southwick, Stephen Hart, Ella Warley, and Melita. The rifles were shipped in crates of 20 each, each rifle accompanied by the appropriate brass handled saber bayonet. A pair of cone wrenches and a single bullet mold were also include in each case. These cases were marked in three lines B / WD / H within a rhomboid, indicating “Brunswick”, “War Department” (Confederate Ordnance Department) and “Huse”. One extant Confederate ordnance document dated August 27, 1862 records the transfer of “260 British rifles (two-groove)” from the Charleston Arsenal to General Sterling Price at Tupelo, MS. This description as “2-groove” rifles indicates that these were the .704 caliber British military pattern 1837 and 1844 Brunswick Rifles. 13,000 rounds of ammunition and 13 bullet molds also accompanied the rifles to Tupelo. With only 50 rounds of ammunition sent with each gun, the bullet molds probably became rather important very quickly, if the guns were to remain in service very long! These Brunswick Rifles almost certainly saw combat less than a month later at the Battle of Iuka, MS (September 19, 1862) and again soon after at the second Battle of Corinth, MS (October 3-4, 1862). One of the finest examples of a carved Confederate rifle is a .63 caliber Volunteer pattern Brunswick rifle identified by its exquisite period inscription to John C. Gillespie of Company K, 18th Arkansas Infantry. The 18th Arkansas fought at both Iuka and Corinth, and suffered staggering causalities at the second battle with losses approaching 85% of the regiment. As the Gillespie gun is a numbered (#1065) “Volunteer” pattern, .63 caliber gun, it must have been part of a different shipment of Brunswick rifles to Price’s troops that we have not found the ordnance records for, as the record mentioned above clearly describes .704 caliber Brunswicks. Not all of the 2,020 Brunswick Rifles purchased by Huse during 1861-62 successfully arrived in the Confederacy. The Stephan Hart was captured by the Federal Blockading Squadron and its cargo was subsequently sold at auction on May 22, 1862. Among its cargo were some 16 cases of Brunswick Rifles, 320 in total, which were sold for $10.00 each at the auction. The Blockade Runner Ella Warley suffered a similar fate, and the September 30, 1863 auction of its cargo included 15 cases of Brunswick Rifles (noted as “small caliber, 7-groove”) which were sold for $12.00 each including their saber bayonets. This means that at least 620 of the 2,020 rifles never made it to southern ports, so a maximum of 1,400 documentable Brunswick Rifles were delivered to the Confederacy.

Overall this is a very nice, if well used example of a scarce Confederate Purchased Brunswick Rifle. While the CH / 1 is nearly obliterated by the hole from the old collection tag, I am quite sure that I can make out its remnants. However, even if the mark were completely obscured, the configuration of the gun being a British military Brunswick rifle with an Enfield short rifle long-range sight added makes it almost definitively Confederate. The addition of the period carved initials and the wear of the gun all suggest that this gun was most certainly part of the 2,020 Brunswick rifles purchased by the Confederacy, and the apparent wear, use and initials suggest further that this gun was one of the 1,400 that actually made it through the Blockage to be used by Southern troops. Only a handful of these Confederate Brunswicks are known, and fine examples with great markings sell in the low 5-figure price range. If this one had a great CH / 1 mark it would be priced at least 50% higher. As it sits, it is priced much more reasonably. A Confederate Brunswick in the identical configuration is pictured on page 127 of The English Connection, with the only difference being that it has a more legible CH / 1 mark. Here is your chance to own an extremely scarce Confederate import for a very fair price, and add a gun to your collection that you might not see available for sale again for a decade.