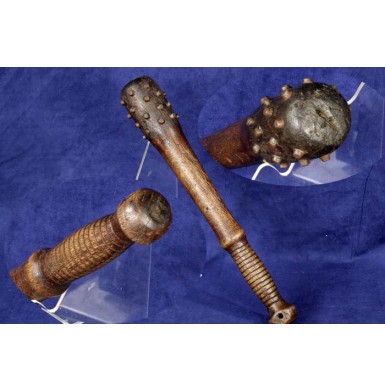 Offered here is a wonderful example of a British Made First World War Trench Club. The club appears to have started life as a “factory made” truncheon, which was then modified in the field to be a more effective weapon. The weapon uses the popular British bat shape, a turned piece of wood in that classic shape. Interestingly, the club does not have the often-encountered reinforcement ring around the head. These rings reinforced the wood to keep it from splitting and also added some additional mass when the club was swung. This club was made more effective by adding hobnails to the striking surface of the head. They are configured in four offset, alternating rows of eight, starting just below the head, with 32 hobnails in all. The club measures 16.93” in overall length, with a roughly 3.75” long head section that is about 2.7” in diameter. Both the top and bottom of the club show small impression marks where the shaft was held in place while turned on the lathe. The shaft tapers to a comfortable 1.38” diameter grip near the bottom and has an enlarged, 1.5” x 1.75” diameter pommel cap at its base; to help ensure a secure grip when the club is swung. The club has the expected lanyard hole in the grip, about .3” in diameter. The grip has fifteen grasping grooves milled into the surface to increase the security when gripping it. The grooves are fairly evenly placed. The club is quite light and handy and weighs in at slightly less than one pound (about 15.4 ounces). This may in part be because of the dryness of the wood. The club may have weighed slightly more when new. The wood shows nice age, along with some finish loss, multiple dings and mars, and some lightly scattered tight surface grain cracks. None of this in any way detracts from the appearance or displayability of the club, nor does it impact its solid and still quite usable condition. There is the expected discoloration to the wood where the iron hobnails are located, typical of wood that has had iron touching it for a long period of time. The hobnails are evenly oxidized and rusted, with moderate surface pitting present. As noted, this form of club is a well-known English “bat” pattern. As with all the trench clubs that I have been offering of late, this club, is 100% complete, correct and original in every way.

Overall this is a very attractive, solid and original example of a World War One British Trench Club. This particular club is from the collection of noted trench club researcher, collector and author David Machnicki, author of At Arm’s Length “ Trench Clubs and Knives Volumes I & II. This club is pictured and described on page 27 of Volume I. Real First World War trench clubs do not appear on the market very often, although well-crafted fakes do from time to time, particularly of this pattern. For any collector of Great War small arms, the Trench Club is one of the most intriguing weapons for that conflict, a throwback to man’s primeval urge to fight for survival using the most basic of weapons, in a war that featured the most advanced technology of the time.