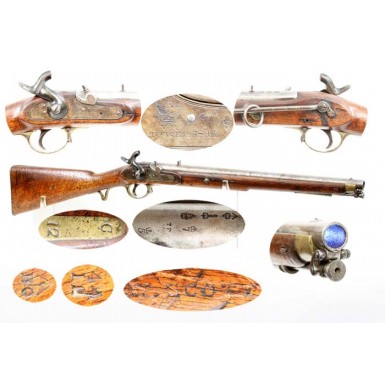 The British Pattern 1844 Yeomanry Carbine was adopted as a somewhat smaller and lighter variation of the Pattern 1843 Second Pattern Victoria Carbine. Both guns utilized a Pattern 1842 percussion lock, designed by George Lovell who was appointed the Small Arms Inspector at the Royal Small Arms Factory at Enfield Lock (RSAF) in 1840. Lovell was a very forward thinking and modern armorer, and strove for uniformity in production, high levels of quality control and sought to produce the most modern and perfected percussion weapons in the world. Lovell’s influence on British military small arms from the late 1830s through his tenure as Small Arms Inspector had a major influence on British military small arms design and production and his contributions are on par with those of his contemporaries James Burton at the Harpers Ferry Arsenal and Erskine S. Allin at the Springfield Arsenal. The P-1844 Yeomanry Carbine had a 20” smooth bore barrel that was nominally .66 caliber, a reduction from the Victoria Carbine’s .73 caliber bore. The smaller caliber was more in line with the traditional English carbine bore of .65 caliber. The barrel was secured to the stock by a screw through the tang of the breech and a pair of barrel wedges, of the same design that Lovell had introduced for the Pattern 1842 percussion infantry musket, which replaced the pin barrel designs that the British military had utilized since the late 1600s. The gun had a simple fixed post rear sight; a captive swivel ramrod and a single brass rammer pipe to help keep the ramrod secured when not in use. The butt plate and triggerguard were also of brass. The triggerguard had a skeletonized pistol grip extension to its rear, similar to that of the Brunswick rifle triggerguard, and the forward bow sported a single sling swivel. A sling bar of about 7” in length was mounted to the left side of the carbine, secured at one end by the rear most lock mounting screw and at the front by a single screw through the stock and a brass escutcheon. The carbine was 36” in overall length weighed in at slightly less than seven pounds. The carbine was produced from 1844 through the early 1850s and was finally made obsolete by the Pattern 1856 .577 caliber rifled percussion cavalry carbine. The Yeomanry regiments of the British Army were volunteer units, and the designation separated them from the standing “regular” army unit. Yeomanry Cavalry regiments like the Northhamptonshire Yeomanry have distinguished histories that go back to the 1700s.

This particular P-1844 Yeomanry Cavalry Carbine is in about VERY GOOD+ condition. The gun is very crisp and well-marked throughout and is 100% complete, correct and original, with the exception of the rammer head, which is replaced from another British carbine of the same period. The lock is clearly marked with an engraved (CROWN) / VR / TOWER 1844 forward of the hammer, and with a small (CROWN) -> to the upper right of the date. The small Crown-Broad Arrow mark indicates British military inspection and ownership. The interior of the lock is marked (CROWN) / 12. The breech of the barrel is marked with two long rows of British military proof marks. One row shows a series of inspector marks: (CROWN) / 7, TP -> , (CROWN) / 10, and the other row shows the British military proof marks: (CROWN) / TP -> , (CROWN) / B / 9 and (CROWN) -> . The bottom of the barrel is marked TURNER (for the famous Birmingham gun making firm of Thomas Turner) as well mating marks. The buttstock is marked with the standard British Ordnance Storekeepers mark: <- BO and with the date code 44 /10 indicating that the carbine was taken into Royal service in October of 1844. The stock flat opposite the lock is marked with a name that is probably that of the “setter-up” who assembled the gun, but the wear from the saddle ring has made this mark illegible. The top of the buttplate tang is stamped with the unit issue marking C / 12. As no unit mark is present, we can only determine that the carbine was #12 in “C troop”. The toe line of the stock is marked with the name W. SCOTT, who was the contractor who built the gun and delivered it to the Board of Ordnance. The firm of William and Charles Scott (often marked W & C Scott) was established in Birmingham in 1842 and became Scott & Son in 162, remaining in business through 1895. The firm was a major producer of military long arms during the first two decades of their existence, and during the 1860s and 1870s transitioned to become one of the finest and best known producers of fine sporting shotguns, and were finally acquired by Webley, forming the company Webley & Scott. During the time that this gun was made, the company was located at 21 Loveday Street, where they were in residence from 1842 to 1848. A pair of (CROWN) / XI inspection marks are present behind the triggerguard as well.

As noted above, the gun is in very crisp, complete condition. The barrel of the carbine has a medium pewter patina and retains no original finish on the exterior. There are some light scattered patches of minor age discoloration, along with some tiny areas of light peppering and minor pinpricking on the surface of the barrel. The bottom of the barrel retains light traces of its original browned finish, in the area protected by the stock. The bore of the carbine is in about GOOD+ condition. The bore is mostly dark with evenly distributed moderate pitting along its entire length. The lock retains about 70%+ of its original vivid case hardened finish. The lock has crisply engraved markings along with the typical Birmingham double line engraving around the edge of the lock. The hammer has double line engraving as well, the usual Birmingham “feathers’ and a crisply checkered thumb piece. The lock is mechanically excellent and functions crisply on all positions. The original cone (nipple) is in place in the snail (bolster) and is in very good condition, with traces of its original blued finish present. The carbine retains its original fixed rear sight, as well as its original front sight. The original sling bar and iron sling ring is present on the left side of the carbine, and the original sling swivel is in place on the front bow of the triggerguard. The sling bar is marked with a (CROWN) / B / 10 inspection mark. The original swivel ramrod is in place on the gun and functions smoothly. The rod is marked R&W A, indicating that it was produced by the Birmingham arms contractors R & W Aston. The threaded tip of the rammer is not the original P-1844 tip, but is rather a period replacement from a P-1852 Padget Carbine. The brass furniture has a lovely medium golden patina. The single brass ramrod pipe shows a dent at the front entry of the pipe, the result of actual service and use in the field. The stock of the carbine is in about VERY GOOD+ to NEAR FINE condition. The stock crisp and sharp and retains strong edges and lines throughout. The stock is full-length, and free of any breaks or repairs. There is a minor chip of wood missing from the front edge of the lock mortise. The chip is old and likely from the period of use. There is also some very minor wood loos around the hole for the triggerguard mounting pin hole. There is some nice wear to the stock at the both the forward and rearward end of the sling bar, suggesting a good amount of time spent with the carbine suspended from a sling by the sliding iron sling ring. Other than noted previously, the stock shows only the expected scattered bumps, dings and minor impact marks from use and service.

Overall this is a very nice, crisp example of a British Pattern 1844 Yeomanry Carbine that was accepted in October of the first year the carbines were produced. The gun is exceptionally well marked throughout, both in the metal and the wood. The gun is complete, correct and original in every way, with the exception of the period replaced rammer head. This carbine would be a very nice addition to any British military arms collection or any collection of 19th century percussion military carbines.