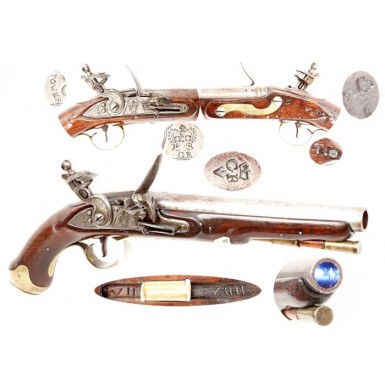 The middle 18th century saw a change in the way in the British Board of Ordnance approached the design of small arms. For the first time, the leaders of men in the field, whose men had to actually use the small arms provided by the board, began to influence designs and innovation. One such man was General George Augustus Eliott, who commanded the 15th Regiment of Dragoons, better known as The King’s Own Royal Dragoons. In 1759, then Colonel Eliott was tasked with the raising an training of the new 15th Regiment of Dragoons, which would be the first “light” dragoon regiment to be raised and equipped. The regiment would initially be named in his honor, Eliott’s Light Dragoons and was renamed c1766 The King’s Own Royal Dragoons. Eliott chose to equip these men with pistol of his own design, which would become known as the Pattern 1759 or Eliott’s Light Dragoon pistol. He would eventually develop a cavalry carbine as well. Unlike the current pattern of “Land Service” pistol then being issued, the Pattern 1756, the new Eliott design was simpler, somewhat more robust, was shorter and only came in one caliber, Carbine Bore. The previous land service pistol, which had changed minimally over the previous 50 years, was an elegant design with a 12” round barrel and was available in either “pistol bore” (nominally .56 caliber) or “carbine bore” (nominally .66 caliber). This had the potential to create problems with ammunition supply in the field. Eliott chose the shorten the barrel to 9”, to only offer the pistol in the same caliber as the carbine his men carried (.66 caliber), simplify the brass furniture and to alter the grip angle to make the pistol a stronger weapon, while at the same time shortening the barrel to make it handier and somewhat lighter. The P-1759 was produced with two patterns of locks, both the standard P-1756 Land Service lock then in production and one of Eliott’s design, the P-1759 Eliott lock, which was most identifiable by the entry of the steel (frizzen) screw from inside the lock plate rather than outside the plate, as was more conventional. The pistol has a 9” round barrel, was nominally .66 caliber, and smoothbore. The barrel was secured to the stock by a pair of simple iron wire pins and a single screw that passed through the breech plug tang. Furniture was simple and of brass. The butt cap was sturdy and simple with small, oval lobes, eschewing the longer spurred butt caps of earlier pattern Land Service pistols. The side plate was semi-serpentine, but flat, rather than convex. Only a single rammer pipe was utilized, and no nose cap was used. The rammer was a simple wooden rod with a brass tip. The stock was simplified and strengthened by altering the grip angle and making the pistol somewhat thicker through the wrist that previous models and most of the ornamental carving was eliminated, with only a simple oval apron (“beaver tail”) around the breech plug tang, a very rudimentary final carving to the rear of the lock, and the elimination of any ornamental carving on the reverse of the stock at the flat, that had been typical on previous models. The pistol remained in use unchanged until 1794, when the Pattern 1777 “short sear” pistol lock was adopted for use. Collectors know this pattern as the P-1759/94. In 1799 the simplified India Service pistol lock was adopted with its stamped (rather than engraved) markings and stamped boarder line decorations on the lock and body of the cock (hammer). The Pattern 1799 Eliott Light Dragoon Pistol would be the last of the British Land Service pistols to use a wooden rammer, and all future patterns of muzzle loading Land Service Pistols (including percussion arms) would utilize a swinging captive steel rammer. The Eliott design also marked the end of the 12” barrel as standard on Land Service pistols, and by the 1790s the longer barreled pistols were being phased out of production.

Overall this is about a FINE example of an original flintlock British Pattern 1799 Eliott Light Dragoon Pistol from the middle Napoleonic War period, that was most likely assembled at the British Armory at Dublin Castle. This pistol no doubt saw service during a very turbulent time within the British Empire, with the both the Napoleonic Wars and the War of 1812 were taking place during its service life. Whether the pistol ever saw service in North America is hard to know, but it likely fired shots in anger from British cavaliers, doing their duty in service of the empire. Elliot Light Dragoon flintlock pistols like this are hard to find in such crisp and complete condition, especially when you realize that the pistol is over 200 years old. The gun remains crisp and sharp with strong markings and has very nice eye appeal. This would be a wonderful addition to any early 19th century martial arms collection, especially one that concentrated on cavalry arms, British arms, the War of 1812 or the Napoleonic Wars.