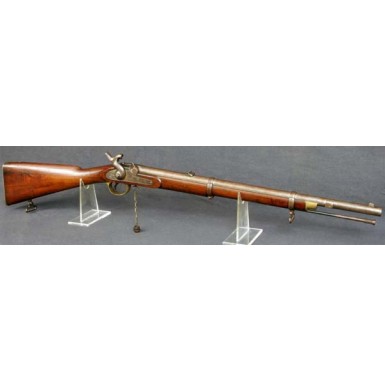 The Pattern 1853 family of percussion long arms that started with the “Enfield” Rifle Musket gave rise to a variety of specialty long arms including the 21” barreled Pattern 1856 Cavalry Carbine with a captive rammer and the 24” barreled Artillery Carbine, in three variations “ the Pattern 1853, Pattern 1858 & Pattern 1861. The Artillery carbines were intended for troops that might have the need for a long arm, but did not need to be encumbered with the weight and length of either the P-1853 rifle musket or P-1856, P-1858 or P-1860 rifles. Since these guns were only intended for use by specialty troops in the British Army, they were produced in very small numbers and are fairly rarely encountered. During the American Civil War, these guns were imported by both sides, but in very small numbers when compared to the importation of rifle muskets and rifles. US Ordnance documents indicate that somewhere between 480 and 730 were imported by the US for use, but it is difficult to determine for sure, as the language in the Ordnance descriptions is somewhat vague. Southern importation was significantly greater, but still very small when compared to the importation of rifles and muskets. According to the Payne Papers, 1,620 artillery carbines were imported through the port of Wilmington, NC between July 19, 1863 and December 3 of 1864. 3,020 cavalry carbines were imported during the same time and 3,460 other carbines arrived at the port as well, but their type is not indicated. Current research into the McRae papers may shed some light on what the other “carbines’ were, and how many of the Artillery carbines were purchased by Caleb Huse in England and were shipped to the Confederacy via ports other than Wilmington. While it is currently difficult to know exactly how many of these carbines were imported by the South during the war, their relative scarcity on the collecting market indicates that they either came in relatively small numbers or were so heavily used as to not have survived. The Artillery Carbine was particularly popular with Confederate General J.E.B. Stuart, the commander of the Army of Northern Virginia’s cavalry corps. An October 7, 1862 missive from Stuart states in part: “Application from General Stuart, commanding cavalry, to exchange rifles, for the Enfield carbines (artillery) in the hands of our infantry.. This not only indicates Stuart’s preference for the short-barreled arm, but also indicates that some of these guns were seeing service in the ranks of Confederate infantry around the time of the battle of Antietam (Sharpsburg). The fact that it accepted a saber bayonet of the same pattern as the Pattern 1856/58/60 rifles made it a handy weapon for light infantry. The bayonet for the Artillery carbine was the only one in British service to utilize a metal scabbard, instead of the more commonly encountered leather one. Although most references say the same P-1856 rifle bayonet fits these guns as it does the rifle, the reality is that the muzzle diameter of the carbine is very slightly smaller than that of the rifle and as such, the bayonet has to have a similarly smaller muzzle ring.

The Enfield Artillery Carbine offered here is the 2nd pattern, or officially the Pattern 1858 Artillery Carbine and is in NEAR FINE condition overall. The primary differences between the earlier P-1853 and the P-1858 variation were the elimination of a short guide key on the barrel, forward of the bayonet stud, the replacement of the Smith’s Roller patent ramrod spoon with the Lovell pattern spoon more commonly found on other P-1853 long arms, and the change to the P-1853 Type III style ram rod with a thicker shaft and a slotted jag head. The gun is 100% complete, correct and original, which is quite rare to encounter with this pattern of carbine. The gun retains the original and correct multi-leaf rear site, the original leather and iron snap cap & chain (nipple protector), both original sling swivels and both of the small screw retaining doughnuts on the barrel band screws. The original saber bayonet lug is present on the gun and is numbered 8 to match it to the bayonet that had been fit to it. The ramrod is the original, correct rod and is full length, complete with threads and bears a faint T&CG (Thomas & Charles Gilbert) makers mark on the shaft. Only the front site shows any alteration or modification. It appears to have either worn down or been damaged in use, and the blade was built back up from brass that appears to have the reddish tone associated with the high-copper content red brass used in the Confederacy. The gun is clearly marked at the breech with the typical Birmingham commercial proofs, including the 25 gauge marks which indicate the gun is in .577 caliber. There is additionally a BSAT (Birmingham Small Arms Trade) mark at the end of the barrel proofs, and this same mark appears on the lock plate, forward of the hammer, and in the wood behind the triggerguard. The lock plate has the usual Crown to the rear of the hammer and is marked 1862 / TOWER forward of the hammer. The name of the contractor who produced the gun is stamped in the toe of the stock: JOSEPH BOURNE. This same name is stamped inside of the lock, in the barrel channel of the stock as well as into the bottom of the barrel. Bourne was a very successful and influential Birmingham gun maker who operated under that name from 1849 to 1866, and from 1867 to 1900 as Joseph Bourne & Son. They were located at 5 Whittal Street from 1849 through 1878 and at 9 St. Mary’s Row from 1879 until they went out of business in 1900. The gun has the matching assembly number 15 on all the major components. The upper edge of the lock plate and the bottom of the barrel are both stamped 15 and the Roman numeral XV is present in the ramrod channel as well.

As previously noted, the overall condition of the gun is NEAR FINE. The fit and finish of the gun are very nice and the wood to metal fit is particularly crisp. The action of the lock works perfectly and remains quite crisp and tight. The metal of the gun is mostly a smooth mottled gray-brown patina, with some light peppering and pinpricking present “ mostly confined to the breech area and the muzzle. The bore rates about VERY GOOD and is somewhat dirty. It shows very nice 3-groove rifling with some light scattered pitting the entire length of the barrel. A good scrubbing of the bore could well improve its condition quite a bit. The stock is in FINE overall condition and is complete and solid with no breaks, cracks or repairs. The stock retains excellent edges and is crisp throughout. It is interesting to note that the stock is made from highly figured walnut with a couple of knots and flaws present “ wood that never would have passed British military inspection but worked just fine for commercial carbines being exported to the North & South.

Overall this is a really impressive example of one of the least often encountered British import arms of the American Civil War. When these guns are found they are often missing the snap cap, rear site and other small parts like the toe mounted sling swivel. Finding a complete gun is almost impossible. The condition is simply wonderful “ used, but well cared fore. It is not a gun that was never issued, nor is it one that saw abusive service. It is simply a wonderful example of an artillery carbine that you will never have to make any excuses for. These guns are quite scarce and I am always looking for them to buy. This is the first one that I have seen that was worth buying in about 3 years, as all of the others were either poor condition guns or were very overpriced. This is a gun that any import arms collector will be very happy with and will enjoy for many years to come.