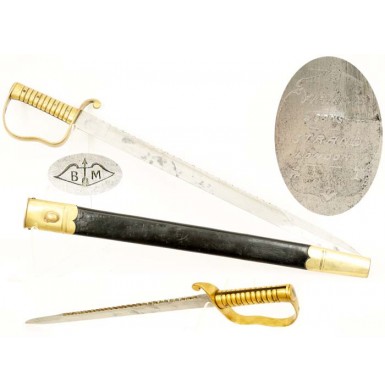 In 1856 the British Military adopted a new sidearm for issue to the engineers, the Pattern 1856 Pioneer’s Sword. The saber was designed to be a multi-purpose tool and weapons and featured a saw back blade that allowed it to function as a saw if need be. The sword had a cast brass hilt with stirrup shaped guard and a 22 ““ long spear-point blade with a 6 ““ long false edge and a 14 ““ long, double row of offset saw teeth. The sword was carried in a black leather scabbard with sheet brass mounts, with upper mount having a frog stud on its face. The sword remained in service for nearly 50 years, being withdrawn in 1903 and being officially classified as obsolete the following year. During its service life the Pioneer’s sword saw service in all of the mid-to-late 19th century conflict within the British Empire, including the Second Opium War (1856-1860), the Indian Mutiny (1857-1858), the Zulu War (1879), the First Boer War (1880-1881), the Boxer Rebellion (1899-1901) and the Second Boer War (1899-1902), not to mention many smaller expeditions and smaller altercations across the holding of the empire from India to Asia and Africa. As some point during the latter part of the 19th century the Pioneer’s sword was accepted as a “substitute standard” cutlass with the Royal Navy, and served in that capacity through the turn of the century. Naval marked specimens are known, but are rarely encountered. As with most British military arms of the era, the Pioneer’s saber was inspected by government viewers prior to being accepted by the military and was typically marked to the regiment to which it was issued, whether within the standing army, the volunteers or the various native and colonial troops. Unmarked specimens are also rare and are typically indicative of private or commercial sale, rather than British military use or association. While the majority of the Pattern 1856 Pioneer’s Swords encountered today have Solingen made blades, the additional markings include a “who’s who” of 19th century English sword making and retailing, including such notables as Wilkinson and Robert Mole, who hilted the Prussian made blades and then sold them to the War Department.

This example of a British Pattern 1856 Pioneer’s Sword is a really interesting find, in that it bears absolutely no British military marks of any kind, suggesting it was manufactured for commercial sale or export. Even more intriguing is the etched legend on the reverse of the blade, that reads in six lines within a shield:

Similarly etched Firms & Sons swords are known with Confederate provenance including British Pattern 1845 Officer’s Swords and the Confederate Naval “Dolphin Head” swords, based upon the British Pattern 1827 “Lion’s Head” Naval Officer’s sword. The company FIRMIN & SONS is one of the oldest British firms, dating back to 1655, and remains in business to this day. In 1655 the family name was listed as “girdlers’ (belt makers), but it was their listing of Thomas Firmin as a button maker in the 1677 London directory that showed the true direction the business would take for the next 338 years. From that point on, the company produced buttons and military furnishings for both the officers of the British military and for military forces around the world. As the current incarnation of the company, Firmin House, proudly states on their web site: “By 1754, the Company's ledgers and order books recorded purchases by King George II and various other members of the British Royal Family. The first known Royal Warrant as a button maker was granted by King George III in 1796. Thereafter Firmin has held Warrants for every successive British Sovereign to the present day.” and “From modest beginnings as button makers, Firmin became the leading supplier of every form of uniform, livery or badge, and the accessories and accoutrements to go with them. This achievement was recognised when Firmin exhibited at the Great Exhibition in London in 1851. Firmin's renown was international: in the American Civil War both sides wore Firmin buttons.” While both sides may have worn Firmin buttons, it was the south that carried Firmin blades. The only other marking on the sword is on the obverse ricasso, which is marked with a “Drawn Bow & Arrow” and the letters B M within the bow, indicating the blade was made by the Bleckman company of Solingen, Prussia. J.E. Bleckman maintained a sales agent in London from 1858 through 1870 and also supplied a number of swords to northern makers and dealers during the American Civil War. The firm went out of business in 1880, so the sword definitely predates 1880. Realistically the sword was almost certainly made during the years Bleckman kept an office in London (1858-1870), and as a commercial item could realistically have been a Confederate speculative purchase for use by CS engineers or as an ersatz naval cutlass.

The sword is in overall FINE condition and is complete and original in everyway. The sword is 27 ““ in overall length with a 22 ““ saw back blade with a spear point. The blade has a 6 ““ false edge at the tip, and a 14 ““ long row of 28 double saw teeth (56 total) along its spine. The brass hilt and guard is slightly over 5” in length. The blade has a medium dull pewter patina with freckled age discoloration and oxidation over the entire blade, along with some small patches of very light surface erosion and pinpricking. A few scattered areas of more significant, thumb sized, surface oxidation are present as well. The blade remains unsharpened as originally issued, with the general thought that it was more of a hacking machete, saw and general tool than a true slicing weapon. The sword appears to have seen little if any use, with the discoloration and oxidation from age and storage. The saw teeth remain extremely sharp and still have some old, thick grease or storage lubricant in their crevices. The brass hilt has a lovely untouched mustard patina with gold overtones and is very attractive. The hilt to blade junction is tight and secure with no wobble or play noted. The original scabbard accompanies the sword and it is in about FINE condition as well. The original mounts are present and are tightly pressed onto the leather scabbard, but the small retaining brads from the mounts are missing, allowing them to be slipped off of the scabbard body, albeit with some effort. The scabbard retains most of its original finish and shows only some minor flaking and light crazing. The stitching along the seam on the back of the scabbard remains tight and secure throughout. There is no looseness or loss of thread noted. The sword fits the scabbard like a glove and has clearly been with the sword forever. Like the sword, there are no British military marks of any sort on the scabbard, which is completely unmarked.

Overall this is a really nice example of an attractive and fearsome looking Pattern 1856 Pioneer’s Sword, made for commercial sale and marked by the famous London retailer FIRMIN & SONS. While no documents have arisen to prove that sabers of this pattern were ever acquired by the Confederacy, the unique pattern, non-military marks for commercial sale and strong connection between Firmin and the south make it an intriguing possibility. So many speculative purchases were made by southern investors and blockade runners that the full extant of their acquisitions will never been known. For the typical Civil War collector, this may the only chance you have to buy a Firmin & Sons marked sword from the Civil War era, without spending $25,000+ for a Dolphin Head CS naval sword!