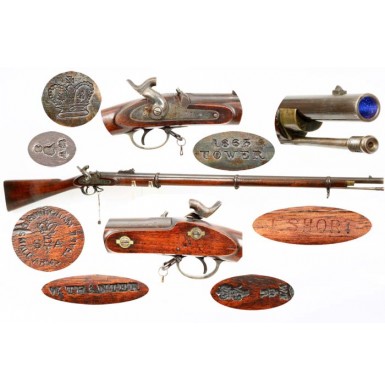 The Pattern 1853 “Enfield” Rifle Musket was the second most used infantry long arm of the American Civil War. The Pattern 1853 Enfield was an important weapon in military long arm history as it was the first “small bore” rifled long arm to see general issue to all British military personnel, effectively making every soldier a “rifleman” and eliminating both the smoothbore musket and the large caliber “Mini” Rifle” as legitimate battlefield weapons. The reduced caliber .577” bore was a significant ballistic improvement over the .702” bore of the P-1851 Mini” Rifle and the overall design of the gun was the epitome of muzzle loading military firearms technology of the time. The P-1853 would significantly influence the design of the new American M-1855 Rifle Musket (and its replacements the M-1861, Special Model M-1861 and M-1863/64) and would be the last of the percussion ignition, muzzleloading arms to see general service with the British military, being replaced by breechloading rifles about the time the Civil War came to an end. The P-1853 was so revolutionary and so well designed that it was effectively the “AK-47” of the era, becoming the either the standard battle rifle for nearly every country in the world, or an equivalent “substitute standard”. Several million “Enfields’ saw use across the globe during mid-19th century, so it is often difficult to determine if a specific Enfield rifle or rifle musket was here for the American Civil War, especially in the absence of specific US or CS markings on the gun. However, with somewhere in the neighborhood of one million Enfields being purchased and used by both side combined during the course of the war, the very fact that the gun is here suggests that it may well be a veteran of that conflict.

This Pattern1853 Type III Enfield Rifle Musket is in EXTREMELY FINE condition, and is a classic example of the typical Civil War imported Enfield rifle musket. The gun is devoid of any British military markings and is a typical Birmingham made contract gun for commercial sale that was almost certainly destined for export. As a Birmingham produced gun it is also a wonderful example of the way the Birmingham Small Arms Trade worked during the mid-19th century with a master contractor assembling the gun from a variety of components made not only by himself but by other B.S.A.T. members. In this case the master contractor was William Tranter, and is clearly stamped W. TRANTER in the toe of the stock, between the buttplate and triggerguard. Tranter’s WT / (CROWN) / R trademark stamp is also found stamped in the top of the barrel’s breech and in the wood behind the triggerguard. A small (CROWN) / B / SA / T stamp is found behind the trademark stamp in the wood behind the triggerguard as well, and a large Birmingham Small Arms Trade cartouche is stamped into the obverse buttstock. William Tranter was born in 1816 and started his gunmaking career around 1840 by buying out the business of Birmingham gunmaker Robert Dugard. Early in his career Tranter also worked with Isaac & John Hollis and Isaac Sheath and an 1849 advertisement listed the firm of Hollis, Sheath & Tranter at 13 St. Mary” Row. In 1849 Tranter registered his first British patent for a pepperbox mechanism and over the next 38 years secured numerous firearms related patented. Tranter’s most celebrated patent was certainly #1913, issued August 16, 1856 for a “double trigger revolver mechanism”, which would be the basis for his very successful series of handguns that are well known to Civil War collectors. Tranter revolvers were particularly popular in the American south prior to the Civil War and a number of extant examples exist with various southern retailer marks, most notably Hyde & Goodrich of New Orleans. Tranter was also a founding member of the B.S.A.T. as the markings on this musket clearly attest. Tranter worked at 50 Loveday Street in Birmingham for much of his career, and worked from that address during the Civil War. He retired in 1885 and died in 1890. The lock of the gun is clearly marked with the typical British “Crown” to the rear of the hammer, but without the accompanying “VR” underneath that normally denotes British government ownership. The lock is marked 1863 / TOWER forward of the hammer. The interior of the lock is marked W. TRANTER over the mainspring, which is an additional indication that Tranter actually contracted to assemble and deliver the gun. The lock maker’s mark is typically found around the mainspring boss, and in this case it also reads W. TRANTER in an arc around the stud. The assembly mating mark | | | | is found on the top edge of the lock and is also found on all of the major components, including under the barrel and in the ramrod channel of the stock. The interior of the hammer neck is marked JR and the underside of the hammer nose is marked GB. The barrel is marked at the breech with the three usual Birmingham commercial proofs: a Provisional Proof, a Definitive Proof and a Definitive View mark. These marks are separated by a pair of 25 gauge marks, indicating that the gun is “25 bore” or .577 caliber. The underside of the barrel is marked with the usual assortment of initials, names and numbers. The numerical marks include a 617 / 617 on the barrel and breech plug mating them. A matching 617 is also present in the barrel channel of the stock. The bottom of the barrel is additionally marked W.T. (no doubt for William Tranter) and JR COOPER. John Rock Cooper was a prominent member of the B.S.A.T. producing firearms, but was probably best known as a high quality barrel maker. Cooper certainly made the barrel of this gun. The ramrod channel also contains the name J SHORT, along with the previously mentioned assembly mating mark | | | |. Two “J SHORT’s are listed in the Birmingham gun maker directories of the era, one a gunlock maker at 81 Mott Street and the other listed as a Gun & Pistol Maker in Upper Priory. This mark is probably that of the latter, who was either the stock provider or stocker for the gun. The initials JR are found at the tail of the stock flat, as well as in the hammer neck, and is most likely the mark of the “setter up” who actually assembled the gun.

The gun is in EXTREMELY FINE condition overall. The gun appears to be 100% original, complete and correct, with nearly every part from the barrel bands and major screw necks to the lock, stock and barrel having the same four file slash mating assembly marks on them. The gun retains about 70%+ of its original rust blued finish on the exterior of the barrel, which is thinning and fading, and about 90%+ underneath where it has been protected by the stock. The exterior finish is freckled with minor flakes of brownish oxidation and the areas where the finish has faded and thinned have mixed with a gorgeous plum brown patina, with the overall appearance of the barrel being a strong plum color. There are a couple of minor areas on the barrel where the finish has worn through to bear metal and these areas have a pleasing pewter gray appearance. The barrel bands have a slightly thinner amount of original blue and more thinning, with weaker hints of the plum coloration found on the barrel of the gun. The metal is mostly smooth, with only the most lightly scattered flecks of minor surface oxidation and a couple of tiny areas of very minor pinpricking. The bore of the gun is in about NEAR EXCELLENT condition with extremely crisp rifling along its entire length. The bore is almost entirely bright with only some very minor scattered pinpricking and minor dust accumulation. A light cleaning would probably return the bore to near mint condition. The lock of the gun retains about 70%+ vivid case coloring on the exterior, with some fading and flecks of surface oxidation scattered over its surfaces. The interior of the lock retains about 90%+ original brilliant case coloring. The lock is excellent mechanically and functions crisply and perfectly on all positions. The gun retains its complete original rear sight, as well as the original front sight/bayonet lug. The gun retains both sling swivels, one on the front of the brass triggerguard and the other on the tension screw for the upper barrel band. The original screw retention “doughnuts’ are present on all three of the barrel band tension screws, a tiny part that is often missing from an Enfield when it is found today. The original full-length ramrod is in the channel under the barrel and retains good threads at the end. An original "snap cap" (cone or nipple protector) is present as well, secured to the rear sling swivel via an iron split ring and compete with teardrop shaped brass chain, iron cone cover and most of its original leather pad on top. The brass furniture has a medium golden patina that matches the condition of the balance of the gun perfectly and is very attractive. The stock is in EXTREMELY FINE condition as well. The wood to metal fit of the gun is wonderfully executed throughout, with no slop or gapping present. The stock is full-length, solid and free of any breaks, cracks or repairs. The stock has a really attractive medium brown color with orange tones and a very attractive grain. The stock retains extremely sharp lines throughout and equally crisp edges, and has absolutely never been sanded. The grain of the wood retains some raised “feathering” indicating that the stock has never been messed with in any way. The rifle does show a number of scattered bumps, dings and minor dents in the wood, as would be expected from a 150-year-old military musket, but remains extremely crisp and sharp overall.

Overall, this is really fantastic example of a Civil War era William Tranter produced P-1853 Enfield Rifle Musket that would be extremely difficult to upgrade from. A decade ago I could find one or two Enfields in this condition for sale every year. Now I practically never see a gun this good on the market and I don’t know when I’ll see another this nice again. The gun has tons of eye appeal, and is so much crisper and sharper than most Enfields offered for sale these days that the difference is very obvious. If you have been waiting to add a really fantastic example of a Civil War era Enfield to your collection, now is your chance to get a real gem of a gun that you will be very pleased to own and display.