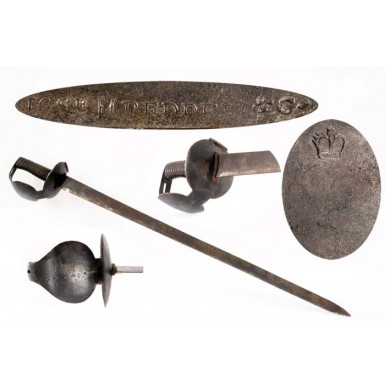 The cutlass was the principle weapon for hand-to-hand combat aboard war ships during the age of sail. While firearms or various sorts, pikes and boarding axes all saw service in similar roles; it was the cutlass that was most often responsible for the repelling of boarders or the taking of an enemy ship by a boarding party. Until a standardized pattern was adopted in 1804, the Royal Navy was armed with a wide variety of short swords and cutlasses that varied in design from variations of hangers and short swords to shortened versions of swords that were commonly used by infantry and cavalry. The classic form of the naval cutlass from the middle 18th and early 19th centuries is that of the British Royal Navy “Figure-8” Cutlass. The form is generally attributed to Thomas Hollier, a London cutler and gunmaker who worked in Whitechapel from 1700-1729. In 1726 Hollier delivered 1,000 naval cutlasses to the Royal Navy that utilized a double disc shaped guard of sheet iron. This was an improvement on pervious cutlass designs that tended to rely upon cast brass guards and hilts. While the brass was resistant to the corrosive salt air of sea service, it was not nearly as sturdy as iron, and in the long run was much more easily damaged. Advances in metal working techniques allowed the production of sheet iron cutlass guards to be more easily produced during the latter part of the 18th century, and when the Royal Navy finally adopted a regulation cutlass pattern in 1804, it was based upon Hollier’s “figure-8” double disc sheet iron guard design, which had already showed its strength and popularity on the high seas. In 1804 the Royal Navy standardized the naval cutlass pattern and ordered 10,000 of the swords on May 30 of that year. While that may seem like a large number of cutlasses, but the standard issue for ships of the line was 350 cutlasses for 1st and 2nd rate vessels and 280 cutlasses for 3rd rates. A first rate “Ship of the Line” in the British Navy circa 1800 was armed with 100+ guns, had 3 gun decks (not counting the exposed upper deck, quarter deck and forecastle) and was crewed by 850 to 875 sailors. That meant 350 cutlasses provided one cutlass for approximately every 2 “ men. A 2nd rate ship of the line was also a 3-decker with at least 90 guns, crewed by 700-750 men, so the ratio of cutlasses to men was approximately 1:2. A 3rd rate ship had 64-80 guns, was crewed by 500-650 men, and with 280 cutlasses on board, had a sailor to cutlass ratio of between 1:1.8 and 1:2.3. Based upon these figures, the Royal Navy was trying to provide cutlasses for approximately every 2-3 sailors, so an order of 10,000 would supply between 20,000 and 30,000 seamen, only a fraction of the overall size of the Royal Navy during the Napoleonic Wars. This newly formalized cutlass pattern had a wide, heavy blade without fuller that between 27 7/8” and 29 ““ in length, with most sources giving a nominal length of 28 ““ as standard. The blades were typically 1 ““ to 1 ““ wide at the ricasso. The tang of the blade passed through a cast iron grip that was grooved in both horizontally and vertically to provide a firm grip when wet. The resulting grip looked rather like a US Army “Pineapple” hand grenade from World War II! The guard was sheet iron, in Hollier’s double-disc form, with a round iron front guard and a similarly shaped knuckle guard below. The top of the sheet iron front guard was rolled forward in a sort of rudimentary quillon. The tang of the blade was peened to the rear of the pommel with no cap. The rear of the sheet iron guard was slotted for use of a saber knot, a feature that was probably considered essential to the army-centric War Department that ordered the cutlasses, but was almost certainly superfluous to the navy. The heavy-duty weapon weighted in a stout 2 “ pounds, give or take a couple of ounces. It has been noted by varying authorities on the subject that the lack of a fuller in the blade and the tapered-spear point design were not the best for a thrusting weapon. However, the overall weight and design suggests the cutlass was more of a hacking weapon, and the weight of the blade would have been equally handy when striking enemy sailors or when hacking through fouled ropes and cordage on any vessel. The Pattern 1804 remained in service through the mid-1840s, when the Pattern 1845 Naval Cutlass supplanted it. The basic design of the P-1804, however, would remain in use with the Royal Navy until the turn of the century, and long bladed, iron hilted cutlasses with sheet iron guards would remain the standard into the era of the First World War.

The Royal Navy Pattern 1804 “Sword For Sea Service” offered here is in about VERY GOOD+ condition. It is interesting to note that the term “cutlass” was not often used in naval procurement or regulations of the time with most references being either to “Sword For Sea Service” or simply “Sword, Naval”, although the Royal Naval manuals of the period do use the term “cutlass”. The spine of the cutlass is stamped with the mark of its maker, John Reddell of Birmingham. The mark is stamped in such as way that the bottom half of the letters are not visible, and the first few letters are difficult to decipher. However, enough of the mark that reads REDDELL & CO is visible to make that identification clear. John Reddell was a listed in the period directories as a “silversmith, hilt maker, toy & hardware maker and sword cutler”. He worked in Birmingham from 1796-1821 at Carey’s Court, Dale End. During that time he was briefly in business silversmith Thomas Bate, and often marked work J.H. REDDELL & Co. Reddell also manufactured swords for export to the United States and eaglehead pommel swords for both American infantry and artillery officers are known to have been made by him. The cutlass is also marked on the obverse of the blade, near the ricasso with the Royal Cypher of King George III, indicating the sword was accepted for use by the Royal Navy. The lack of additional acceptance marks suggest this is one of the earlier cutlasses to be delivered, as a more stringent inspection and marking system developed circa 1810-1815. The cutlass retains its original length, unaltered blade, which measures 29” in length and is 1 ““ wide at the ricasso. The blade has a mostly uniform, smoothly oxidized brown patina with scattered pinpricking along its length. There are also a few patches of more obvious surface oxidation and light pitting present on the blade as well. The tip of the blade has been blunted or damaged, most likely by dropping the cutlass on its tip. There are a few minor nicks along the cutting edge of the blade and a small nick is present in the blade about ““ in length, roughly 1” from the tip on the obverse. These marks all appear to be from service and use and appear quite old. The blade also shows some signs of old sharpening, typical of a naval cutlass on duty during the height of the Napoleonic Wars. What appears to be the original leather washer is present at the junction between the blade and guard, and it shows significant age and is quite dry. The cast iron hilt shows the usual pattern of approximately 18 vertical grooves intersected by 6 horizontal grooves. The hilt shows some minor wear and light surface roughness, typical of cast iron. Both the hilt and the sheet iron “Figure-8” guard retain much of their original black paint, applied to help weatherize the cutlass. The paint had worn and chipped and the underlying metal has acquired a smooth oxidized patina with only some scattered light pinpricking and minor pitting present. The original peen is undisturbed at the rear of the hilt, and the hilt to blade junction remains strong and secure. The iron guard does show some minor left to right motion, but this is probably the result of the throat washer drying and shrinking. All of the components remain securely attached to each other with no issues as to their overall structural integrity. The cutlass is without a scabbard, which is typical. Even though the cutlasses were normally accompanied by leather scabbards, the their storage aboard ships in racks on the fighting decks and often in lockers or chests usually resulted in the scabbards being lost or discarded as they were generally unnecessary for the sailors, who were more apt to stick the cutlass in a belt or sash than to carry them in a scabbard when it was necessary to do so.

Overall this is a really nice, solid and complete example of a Royal Naval Pattern 1804 Cutlass. The sword has a lovely, untouched look to it, with a royal cypher on the blade and a semi-legible maker’s mark on the spine. While made in some quantity, these early naval cutlasses are difficult to locate in solid and complete condition and often show significant wear, pitting or rusting. It is often common to find them with shortened blades as well, a modification typical in the latter part of their service life and into the mid-1800s. This one is full length, with good marks, and a great look and would be a wonderful addition to your collection. Whether you specialize in British naval arms, naval arms in general, War of 1812 arms or Napoleonic arms, you will be glad to add this cutlass to that collection. When you hold this cutlass in your hand, you are almost instantly transported to one of the most decisive naval battles in history, Trafalgar, and can easily imagine yourself on board Admiral Nelson’s flagship HMS Victory as the French fleet is defeated!