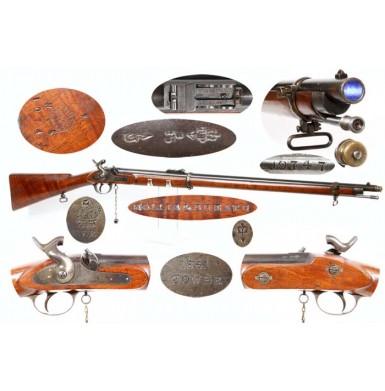 On January 25, 1856 one of the first, and most important long arms to be derived from the P1853 Enfield Rifle Musket was officially approved for use in the British Army. The Pattern 1856 “Short Rifle” was an iron mounted variant based upon the P1853 Rifle Musket with the same .577 caliber bore, the same 3-groove rifling with a 1:78” rate of twist, but with a shorter 33” barrel and an appropriately shorter stock. The most important new features that were debuted on the Pattern 1856 were an improved, “double freed”, lock that was designed to minimize friction within the internal parts, an 1,100-yard rear sight and a bayonet stud brazed to the barrel that accepted the new Pattern 1856 saber bayonet. The “Short Rifle” was intended for issue to the 60th Regiment of Foot, the Rifle Brigade, the Cape Mounted Rifles and the Royal Canadian Rifles, as well as sergeants in all line infantry regiments. The shorter barrel and slightly lighter weight were both considered substantial improvements in the handling of the rifle versus the rifle musket for skirmishing and similar activities. By late November of 1856, the first contracts for the new Pattern 1856 short rifle were being let to the Birmingham contractors, with more contracts to follow with both Birmingham and London makers. Almost immediately concerns began to develop regarding the stability of the bayonet stud on the barrel, and the possibility that the stud could be damaged or broken when the bayonet was used, or more seriously the barrel itself could be damaged. There was also concern about the damage that could be done to the barrel when the lug was brazed on, due to excessive heat. The remedy that was almost immediately suggested was that the bayonet lug should be mounted on the upper barrel band, rather than the barrel itself. In order to make this a workable solution the redesigned rifle was stocked to within 1 ““ of the muzzle with the front band placed where the old bayonet stud had been located. Additionally, a metal pin was added, passing through both sides of the barrel band and the stock beneath the barrel to support the band and prevent it from deforming or rotating when the bayonet was mounted upon it. This new design was officially approved on July 6, 1858 and became known as the Pattern 1856 Rifle No 2, also designated the Pattern 1856/58 Rifle and sometimes as the Pattern 1858 Rifle as well. This last designation only created confusion, as the Royal Navy had adopted their rifle, designated as the Pattern 1858, which was a brass mounted short rifle with a heavier 33” barrel, rifled with 5-grooves and a much faster 1:39” rate of twist “ twice as fast as the rifle musket.

As a result, the War Department very quickly resorted to calling the gun the name that would be used to describe it by future collectors and arms enthusiasts; the “Bar on Band” rifle. It is not clear how quickly the contracts for the new No 2 rifle were let, or whether the existing contracts were modified to meet the new “bar on band” specifications. However, the speculation is that only a few thousand of the rifles were manufactured. With the inherent lag and sluggishness in the Birmingham trade when adopting new changes to patterns, it is unlikely that many (if any) short rifles of the “bar on band” configuration were manufactured before the summer of 1859, and further likely that it was sometime in 1860 before bar on band rifles were being set up, inspected and accepted for service. At about the time the new rifle was being brought on line with the contractors, the War Department cast a spanner into the works and changed the specifications again. On February 22, 1860, the War Department officially recommended the adoption of the army version of P1858 Naval Rifle to replace the P1856 and P1856 No 2 rifles, to be officially designated the Pattern 1860 Short Rifle. Since the acceptance of the short rifle pattern, it had been felt that the overall accuracy was not on par with that of the rifle musket. The navy designed 5-groove barrel with a rate of twist twice as fast as previously adopted turned the lack luster short rifle into a real tack driver. The heavier barrel with slightly larger exterior diameter resolved the issues related to barrel strength and bayonet lug problems and less than two years after being officially adopted, there was no longer any reason to produce the Pattern 1856 No 2 Bar on Band Short Rifle. Again, the contractors slow walked the changeover in specifications, reverting to the older pattern stocks that were shorter and producing the new, heavier barrels, rifled in a new way. Pattern 1858 No 2 rifles continued to be delivered in spurts though 1861 and early 1862, but after that date the Pattern 1860 Short Rifle, and its nearly immediate replacement, the Pattern 1861 Short Rifle, were produced for the British military and existing stocks of leftover “bar on band” parts were left to be used up on Volunteer pattern rifles and commercially made rifles. A number of these guns made from leftover “bar on band” parts were purchased by the Confederacy, and during 1861-1862 a significant portion of the JS/Anchor inspected and inventory numbered short rifles to be purchased by the South were of the “bar on band” pattern, with both iron and brass mountings.

The Pattern 1856 No 2 Bar on Band Rifle offered here is a VERY FINE example of this scarce British military rifle. Due to the delays in manufacturing the new pattern and its almost immediate replacement by the Pattern 1860 and then Pattern 1861 short rifles, extant examples of British military accepted and marked “bar on band” rifles are quite scarce. The rifle was produced by the famous Birmingham based gunmaking firm of Hollis & Sheath and their name is clearly stamped in the toe line of the stock. Their name or initials also appear on all of the major components of the rifle. The lock of the rifle is clearly marked 1861 / TOWER forward of the hammer, and with the usual English (CROWN) / VR government ownership mark to the rear of the hammer. The typical British military small crown with a downward pointing Broad Arrow is present on the forward portion of the lock as well. The 1861 dated lock indicates that this rifle was in the middle of the groups of guns delivered to the British military. The interior of the lock is marked with the assembly mark | | |, which is also found in the ramrod channel of the rifle. The lock is further marked on its interior with the initials R.C. and W.B. as well as with the initials H&S and the usual group of military inspection marks. The name SIDDONS & SONS is stamped in an arc around the mainspring boss, indicating that Williams Siddons was the maker of the lock. Siddons was one of the finest lock makers of the period and received British Patent #1789 in 1854 for a friction reducing lock work that was a substantial improvement over the standard percussion lock of the period. The lock of the rifle functions perfectly. It remains crisp and is mechanically excellent. The lock retains some traces of the original casehardened finish with a mostly mottled bluish-gray coloration where the coloring has faded. All of the markings remain crisp and sharp on the lock as well. The rifle also retains an original snap cap (nipple protector), secured via the original brass chain and iron split ring. The snap cap is still attached to the original swivel ring, mounted just forward of the trigger guard. The barrel retains about 60%+ of its original blued finish on the exposed portion, about 90% on the portion protected by the stock, and probably 70%+ overall. The surface blue has a streaky appearance with fading, wear and loss from handling and use resulting in areas of deeply blued metal and areas with a more plum brown to blue gray patina. The metal is mostly smooth with only lightly scattered pinpricking and very minor pitting around the breech and bolster area, and some scattered minor surface oxidation as well, scattered along its length. The left breech is clearly marked with the usual British military proof and inspection marks. The bottom of the rifle’s barrel is clearly marked HOLLIS & SHEATH, who was the maker of the gun, and is also marked with the name of the barrel maker, DEAKIN. The barrel is also marked with numerous British military crowned inspection numbers. The mating mark 956 is also present. The bottom of the barrel and the bottom of the breech plug both bear this mating number, and it is also found in the barrel channel of the stock. The bore of the rifle is in about FINE condition. It is somewhat mostly bright, with very crisp rifling. The bore shows some scattered light pitting along its entire length. The original 1,100-yard rifle sight is in place on the rear of the barrel and is fully functional and complete. The rifle retains its original iron sling swivels on the upper barrel band and in the rear in the toe of the stock at the end of the extended triggerguard tang. The ramrod in the channel under the barrel is the original rod for the rifle. It is full-length, with some of the threads at the end, but a couple of the threads are broken off. The rod is maker marked R&WA for R&W Aston and is also inventory numbered 10747. This same inventory number is found on the obverse buttstock as well. The original tompion for the rifle is also present and it has the same inventory number as the ramrod and stock also. The tompion’s cork section is worn and has shrunk, so it is loose in the bore. The upper barrel band retains its original screw retaining “doughnut” at the end of the tension screw, as well as the original saber bayonet lug on its right side, which is numbered 835 to match it to the bayonet that was fit to the rifle. The lower barrel band also retains its original doughnut shaped screw protector and retainer, a tiny part is often missing from barrel bands. The stock of the rifle is in about VERY FINE condition as well and has a nice rich, brown color with an orange tone. The wood to metal fit of the stock is excellent throughout. The stock retains sharp lines and fine edges throughout and shows no indications of having been sanded. The stock does a number of scattered bumps, dings and mars from use in the field. The obverse butt bears a clear War Department storekeeper’s roundel that reads BIRMINGHAM 1861 in a circle around a (CROWN) / W O / (BROAD ARROW) mark. The obverse butt is also deeply struck with a 1 adjacent to the roundel. This indicates “First Class’ a rating not typically given to a Birmingham made rifle that was non-interchangeable. Additionally, the letters N. S. over the inventory number 10747 is stamped in the stock, partially over the storekeeper’s marks. I believe the “NS’ indicates that at some point this rifle was sent to Canada where it served in Nova Scotia. The stock remains full-length and solid and is free of any breaks or repairs. Other than normal handling and storage marks, the stock remains very crisp and sharp throughout.

Overall, this is a really fantastic example of a relatively scarce British military marked Pattern 1856/58 Bar on Band Short Rifle. The gun is 100% complete and correct in every way and is a simply wonderful state of preservation Very few Pattern 1856 No2 Bar on Band Short Rifles were produced and even fewer have survived, making them rather difficult to add to a collection. This is only the second British military “bar on band” I have had in the last few years and is certainly one of the finest examples that I have seen. I am sure you will be incredibly pleased with this very interesting and high condition rifle on display in your collection.