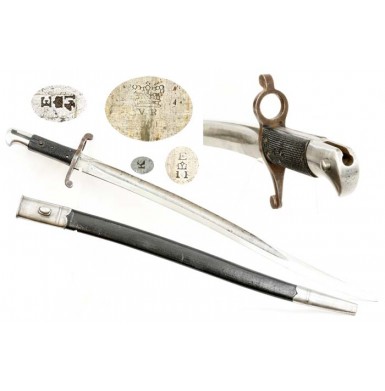 On December 18, 1863 the British Board of Ordnance officially adopted a new Yataghan bladed saber bayonet for use on the newly adopted Pattern 1863 Whitworth Rifle that was being manufactured at the Royal Small Arms Factory at Enfield Lock for limited issue on a trial basis to regiments in the field. The new P-1863 bayonet was for all intents and purposes simply a modified Pattern 1858 “Bar on Band” saber bayonet, with a slightly smaller muzzle ring diameter and a circular rather than rectangular mortise cut in the hilt. The reason that a “bar on band” mounting system was adopted by the Board of Ordnance was the fear that a saber bayonet lug could not be easily welded to the steel barrels being used on the new Whitworth pattern rifles without damaging the barrels. This fear turned out to be unfounded, but no new variant was ever adopted due to the limited issue and short period of use of the Whitworth rifles. According to research by English arms author Ian Skennerton, about 9,000 of the Whitworth bayonets were manufactured at Enfield Lock, with 1,000 turned out during fiscal year 1862-1863, 3,180 during 1863-1864, 4,000 in 1864-1865 and only 40 during 1865-1866. This only totals to 8,220 bayonets, but Skennerton notes that about a 10% overage was typical to reported bayonet output, that is why he uses approximately 9,000 for a production figure. The bayonet had a nominally 22 ““ long, semi-yataghan blade, with an iron crossguard and pressed leather grip panels with impressed checkering. The overall length of the bayonet was 28 1/8” and it was carried in the same pattern of iron mounted leather scabbard as in use for the P-1856 and P-1858 saber bayonets. The muzzle ring of the P-1863 Whitworth saber bayonet measured approximately 20.2mm, while the standard P-1858 bayonet had a slightly larger 20.5mm muzzle ring. With only between about 8,300 and 9,000 of these bayonets being produced and most seeing service in field trials over a period of several years, examples are difficult to find these days and are always a coveted addition to any collection of 19th century British military bayonets or to add to the display of a British military Pattern 1863 Whitworth Rifle.

Offered here is a VERY GOOD+ condition example of the British Pattern 1863 Whitworth Rifle Saber Bayonet. The bayonet has a medium silvery gray patina, with scattered patches of lightly oxidized age discoloration. The blade is mostly smooth with only some very lightly scattered pinpricking present. The iron hilt has a medium brown, moderately oxidized brown patina, and the pommel cap remains mostly bright with a few impact marks and some minor pitting on its rear. The ricasso of the blade is marked with a (CROWN) / VR / ENFIELD on the reverse and with the E / (CROWN) / 11 inspection mark on the obverse. The word “ENFIELD” is mostly obscured due to wear and possibly an old light cleaning. The top of the pommel cap, forward of the mortise cut, is stamped with an E / (CROWN) / 41 inspection mark and spine of the blade is marked with the letter K and the remnants of an inspection mark that appears to have read E / (CROWN) / 8. The original spring catch is present in the hilt and functions correctly. The pressed leather grip scales are in FINE condition and retain very good checkering with the expected minor bumps, dings, mars and scuffs from service and use. The leather panels show no substantial warping or shrinkage with tend to plague these types of grips. The scabbard is in about GOOD+ to NEAR VERY GOOD condition. The leather remains solid with strong original stitching along the seam on the back. The surface of the scabbard has been painted with black enamel paint that is very well applied and gives the appearance of the original leather surface finish with some high gloss wax applied. It appears that the original finish remains intact under this paint, and it appears the added finish was intended to protect the scabbard and preserve it, which it has done very well. It does not materially detract from the display of the scabbard. The iron mounts remain solidly attached and have a dull pewter patina with some salt and pepper oxidized discoloration and some scattered pitting on the drag.